Create Your Own Baby: The Future of Human Embryonic Gene Editing

Imagine walking into Oceanview Terrace, UCSD’s newest dining hall, and standing in the pizza line. Pondering your choices, you consider the specials–southwest, chicken & artichoke, or vegetarian. Not finding any of them particularly appealing, you choose to make your own pizza, with any combination of toppings.

The near future of human embryo gene editing is like choosing from the specials menu, but instead of veggies and meats, there are different combinations of your and your partner’s genes. One combination may be brown hair, blue eyes, and susceptibility to heart disease, while the other may be black hair, brown eyes, and male pattern balding. This is teetering on the brink of becoming reality, through the advent of designer babies. 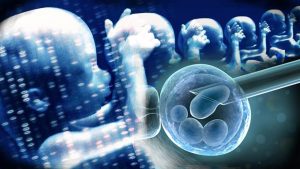 Designer babies are created by growing embryos on a petri dish and selecting one to implant. In the near future, parents may be able to choose an embryo based on their DNA sequences. (Source)

In 2013, Conor Levy became the first baby to be born using in vitro fertilization followed by his parents choosing which embryo to implant. While they chose solely based on the number of chromosomes in the embryos, which corresponds to their chance of success, the technique can be tweaked to allow for consideration of genetic mutations. Experts predict that soon, parents will be able to select embryos based on cosmetic and behavioral traits, as well.

Further in the future, gene editing may allow people to “make their own” embryos, not limited by parental genes at all. For example, parents carrying no green eye genes could engineer their child to have green eyes. This may be enabled by CRISPR-Cas9, a genome editing tool explained in this video.

CRISPR-Cas9 allows scientists to remove a section of DNA and replace it with a different sequence. While genetic engineering has existed since the 1970s, CRISPR-Cas9 is revolutionarily inexpensive and fast. It was used to do the first successful gene editing of a human embryo in April 2015, when Chinese researchers modified a gene related to blood disease. A year later, this was done by a Chinese team for the second time, but for HIV resistance. Both resulted in non-viable embryos, emphasizing the difficulty of human embryo gene editing, and gene editing overall. This is partially because the complexity of biological systems means that editing genes can have many unforeseen effects, especially in humans.

However, germ line gene editing has been successful in other species. In November 2015, UC San Diego scientists used CRISPR-Cas9 to create a breed of mosquitoes that were unable to transmit malaria. Almost 100% of the offspring exhibited the trait. Dr. Ethan Bier, who was involved with the study, said, “The ability of this system to carry large genetic payloads should have broad applications to the future use of related CRISPR-based ‘active genetic’ systems.” 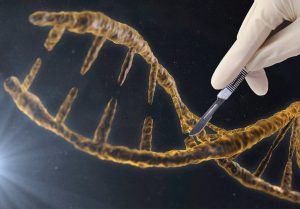 In the more distant future, scientists may use CRISPR Cas-9 to edit human embryonic genomes. (Source)

If edits are made to the genes of viable human embryos, generations of offspring may be altered. The Chinese studies sparked a global debate over the ethics of modifying embryos. What right do parents have to make decisions that will so heavily influence their children’s, and their children’s children’s, lives? Since designing your baby will probably be expensive, how will children born into economically disadvantaged families have an equal chance to succeed?

University of New Mexico academic David Correia expressed concern over “legacy genetics,” in which societal wealth gaps may translate into permanent genome disparities. Others, like Yale emeritus historian Daniel Kevles, have warned against a resurgence of eugenics, the racist socioscientific movement to breed superior humans. Many have called for governments to regulate gene editing research, and several countries have already done so to varying degrees.

It is important to encourage conversations about the ethics of human embryo gene editing. Governments must implement regulations that ensure safety and equity, but do not restrict innovation. Although as many impediments limit human embryo gene editing as there are people in the often long Oceanview pizza line, we need to be prepared when we’re up to order.