“You’re gonna need a bigger boat” – Jaws is just one example of the many movies featuring a shark as the villain. With their sharp teeth, dark eyes, and nearly 400 million-year history, they are easy to paint in a frightening light. But, in actuality, sharks pose far less danger to humans than we do to them.

Sharks come in many different body types; some are easily recognizable, like the great white or hammerhead, while others look positively alien to us. However, all sharks have a skeleton made of cartilage in place of bone, except their teeth and jaws. Because cartilage can’t fossilize like bone can, scientists estimate the size of a shark based on the size of its fossilized jaws; similarly, the size of an individual shark can be estimated based on the size of the bite marks it leaves on large prey such aslike seals or whale carcasses. Shark skin is covered in tiny scales aptly named “dermal denticles” because they resemble small teeth. If you were to run your hand along a shark from its head to its tail, it would feel slick and smooth, but if you ran your hand from its tail to its head it would feel like incredibly rough sand paper, and might even scrape up your skin. These denticles make the shark more streamlined, and have even been used as inspiration for streamlining competitive swimwear.

The sleek bodies of sharks span a huge range of sizes, from the 7-8 inch long dwarf lantern shark to the 32-55 foot long whale shark (the largest living fish). In many aquariums or natural history museums, you may even see fossilized jaws of the extinct megalodon, which was estimated to range from 45-60 feet in length. Lastly, some species give birth to live young, while others lay eggs sometimes known as mermaid or devil’s purses. These eggs look more like small pouches rather than like the eggs we normally see, and the baby shark can often be seen moving inside the pouch under direct light.

The massive whale shark, right, and the dwarf lantern shark, left. Surprisingly, both of these radically different looking sharks have the same diet: tiny krill.

Contrary to popular belief, only a small number of shark species pose a threat to humans;, and the few species that do occasionally harm humans attack far less often than most people believe. The most dangerous shark species to humans is the bull shark, as it favors brackish water where rivers meet the ocean. Unfortunately, those are popular areas for humans, and bull sharks have been known to travel upriver sometimes. Bull sharks are known to be more aggressive than other shark species, and more likely to be found in shallow, fresh water. 2016 had a record high of 107 attacks – from any species of shark – worldwide, but only 8 deaths. This upswing is due to factors like warmer temperatures and more accessible beaches. The more people visiting the beach, especially with rougher waters and with less visibility, the greater the potential for shark attacks. A shark’s only way to interact with the world around it is with its mouth, so if it finds potential prey or an object it has never encountered before, its best way to gather information is to give it a test bite. 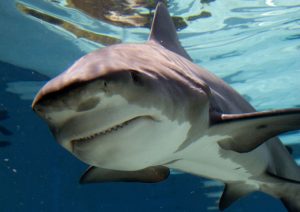 Like other predators, sharks play an integral part in keeping prey populations in check and preventing population booms of one species from wiping out other species. However, they are villainized by the public and hunted to the point of serious endangerment. Movies like Jaws may be classics, but they spread huge misconceptions about sharks. Joanne Cantor of the University of Wisconsin-Madison studies the effect of fear and media on memory, and says Jaws was great at tapping into and expanding people’s fears of the open ocean and what may lurk within. A 2016 study at Scripps Institute of Oceanography found that adding ominous background music to a short video of sharks swimming significantly affects viewers’ perception of sharks, compared to uplifting music or no music at all. They hope that documentarians will become aware that, while ominous music may help increase drama and viewership, it can actually hurt conservation efforts in the long run. Conservationists can only hope that Shark Week takes note.

However dangerous they may seem, humans harm far more sharks than they could ever harm us. Shark fin soup is a popular delicacy in many countries;, and because only the fins are valuable to sell, fishermen will chop off a shark’s fins and then toss the shark back into the ocean to bleed out or suffocate as it sinks to the ocean floor. Conservationists are still combating shark culls in many countries – culls are national efforts to set up large nets and other measures that will kill sharks near fishing areas to prevent them from eating caught fish or getting near public beaches. However, these measures kill endangered species of sharks and many other important species, and have been found to be ineffective at increasing public safety. West Australia dropped its culling program in 2014, but countries like New South Wales still have programs that conservationists are working to stop.

Our next door neighbor, the leopard shark. Fully grown it measures about 4-5 feet from tip to tail. (Source)

Here in La Jolla, we have many marine neighbors that coexist with us. One of these neighbors is the leopard shark, a small shark species that visits La Jolla Shores in huge numbers in the summer for our warmer temperatures. For information on these sharks and how to safely enjoy the beach with them, you can watch Dr. Andrew Nosal’s (Scripps) video or visit nearby Birch Aquarium to learn more.