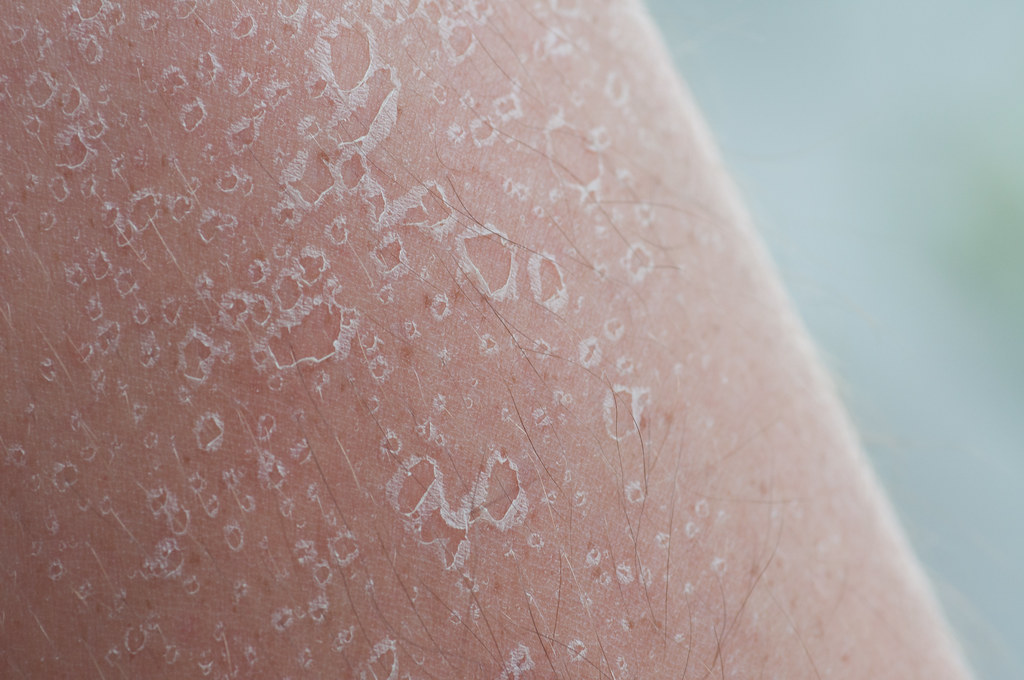 Image: A close up image of sunburnt human skin (Source).

Like so many of my peers, my relationship with my skin has been complicated. My sole refuge during endless years of agony has been the one and only Hyram Yarbro. Yarbo, as well as every dermatologist I’ve encountered, has cemented into my subconscious the importance of protecting one’s skin against the sun with sunscreen. As the sun’s rays continue to wreak havoc on Earth’s inhabitants, the dermatological emphasis on shielding oneself from the sun raises the following interesting question. Given that the Earth’s global average surface temperature has increased two degrees celsius since the 1850s, how will the changing climate impact humans’ largest organ: their skin?

This increase in global temperature has expanded the geographic range of habitats that are hospitable to skin-altering pathogens such as the ones causing Lyme Disease and Leishmaniasis. Kaffenberger and his team cite the drastic increase in reported cases of Lyme Disease, from an estimated ten thousand cases per year in 1995 to thirty thousand cases in 2013. The team also noted that the number of cases reported may be far below the actual instances of Lyme Disease, as the Center for Disease Control estimates that in 2012 there were three hundred thousand cases of the illness. Lyme Disease, caused by the spiral shaped bacterium (or spirochete) Borrelia burgdorferi,  results in a bulls-eye shaped rash, flu-like symptoms, joint pain, and an overall diminished quality of life.

Another study by R. Fathy found that warmer weather and milder winters, both results of the changing climate, have expanded the environment hospitable to the ticks responsible for infecting human hosts with Lyme Disease. Whereas Lyme Disease previously only plagued patients in the northeastern United States, it now consistently occurs in patients in all fifty states and in some parts of Canada. Kaffenberger’s team noted that incidents of Lyme disease have continued to expand as the habitat for ticks continues to expand.

Fathy expects that by promoting hotter and drier seasons, climate change will also facilitate an increased incidence of Leishmaniasis, a parasitic disease which causes sores that have the potential to develop into ulcers. Just as with the spread of ticks and prevalence of Lyme disease, climate change has expanded the number of environments that are hospitable to hosts of Leishmaniasis.  Doctors without Borders classified Leishmaniasis as the second most prevalent cause of parasitic deaths, and Fathy estimates that twice as many people will be infected with Leishmaniasis by 2080. Though Leishmaniasis and Lyme Disease are both fatal illnesses, the expected rise in prevalence of these diseases pale in comparison to the disastrous consequences of prolonged exposure to solar rays.

In addition to increased risk of developing cancer, exposure to ultraviolet radiation (UVR) corrodes the skin’s first layer of defense, or the outermost layer of the epidermis: the stratum corneum (SC). Krysta Biniek of Stanford University concluded that increased exposure to UVR reduced cellular cohesion within the SC and compromised the barrier function of human skin. In 2000, sixty thousand people worldwide died prematurely due to excessive UV exposure, a figure that Biniek anticipates will be amplified by the worsening effects of climate change.

In a study conducted by D. E. Brash and their team, out of twenty four patients suffering from skin cancer, fourteen contained mutations in the p53 tumor suppressor gene. Mutations within the p53 gene are common among patients with a wide variety of cancers including colon, lung, esophagus, breast, liver, and brain cancer. This gene is responsible for the generation of the p53 protein, which regulates the division of cells and inhibits tumors from growing. The mutation caused by UV radiation alters the amino acid sequence of the p53 protein and inhibits the protein from performing its intended function, thus resulting in an increased risk of developing tumor cells. Due to the high prevalence of cytosine (C) to thymine (T) mutations as well as the double base mutations (CC → TT),  both of which are mutations known to be caused by DNA’s direct absorption of UV light, Brash concluded that absorption of UV light was the source of patients’ mutations.

A study conducted by Jan C van der Leun found that UVR’s carcinogenesis, or its ability to cause cancer, increases as temperature rises. Over the course of about a year, researchers exposed two groups of mice to UVR six times per week. One group of mice was exposed to a full spectrum of light that stretched across ultraviolet, visible, and infrared wavelength ranges, and the other group of mice was exposed exclusively to radiation between 280 and 340 nm, a range that includes all wavelengths known to cause cancer. Contrary to the researchers’ expectations, the mice exposed to the full spectrum of light grew tumors faster than their counterparts. One possible explanation for this phenomenon is that higher temperatures are associated with the full spectrum of light. Researchers repeated the experiment and found that tumor production was significantly increased in environments of 28 – 35 degrees Celsius as compared to room temperature environments (23 degrees Celsius), concluding that the increased temperature associated with the full spectrum of light was connected to the unexpected result in the first two groups of mice. Analysis of this experiment and an experiment conducted by Freeman and Knox in 1964 concluded an average increase of UVR’s carcinogenic effectiveness by 5% per degree Celsius. This is consistent with Fathy’s assertion that current estimates associate a 10% jump in carcinogenic effectiveness of UV radiation with each two-degree increase in the Earth’s surface. Additionally, according to van der Leun, experimental findings indicate that increasing temperatures above room temperature both introduces genetic instability, which can allow for development of tumorigenic cells, and decreases the efficacy of DNA restoration efforts after UV-related damage. Furthermore, the difference in methods used by mice and humans to regulate their skin temperature may make humans more susceptible to developing cancer as temperatures increase. Van der Leun estimated that the number of additional patients diagnosed with skin cancer in the year 2050, given an anticipated global rise in temperature of two to four degrees Celsius, to be in the hundreds of thousands. He noted, “If the interaction between UV carcinogenesis and temperature indeed also works in humans, skin cancer may well become one of the serious effects of climate change.” According to Stanford Medicine, individuals who develop skin cancer are at a higher risk for developing blood, breast, colon, and prostate cancers, all of which can be fatal. While the solution to the aforementioned medical conditions entails actions to mitigate climate change as a whole, advice to individual patients remains consistent from dermatologists to beauty gurus: seek out shade and start rocking some sunscreen.

Air pollutants from the burning of fossil fuels, one of the root causes of climate change, can increase the intensity and prevalence of inflammatory skin conditions such as atopic dermatitis (colloquially referred to as eczema). The increased prevalence of wildfires due to increasingly hotter and drier seasons, which amplifies the presence of air pollutants, has also been found to exacerbate inflammatory skin conditions. Extreme weather conditions, compounded by the effects of climate change, have also reportedly contributed to worsening skin conditions. The World Health Organization reported that after major flooding events, skin-related issues represented 19% of all medical conditions. In addition to flooding, the displacement of individuals due to climate related disasters is correlated with  rises in instances of scabies, a highly contagious disease that results in severe itching and eczema, inflammation of the skin.

As the worsening effects of climate change continue to impact human life, it is imperative that individuals take action in their daily lives to protect themselves, most specifically by listening to advice from climate scientists and slathering on some sunscreen.