The Healing Modalities of Mindfulness

We hear it all the time–“close your eyes, take a deep breath, and clear your mind.” These three simple steps are core tenets of meditation, which is believed to promote a range of psychological benefits including instant mental clarity, long-term decreases in stress, and increased focus. Meditation continues to expand universally, irrespective of race, socioeconomic stance, and religiosity. As we increasingly implement this practice into our lives, it is beneficial to understand its origins and intentions, as well as the extent of its physiological impact.

The origins of meditation trace back to ancient India preceding 1500 B.C. Thereafter, various meditative forms began developing across neighboring Taoist and Buddhist communities. The Vedic, or ancient Hindu, tradition defined meditation as a process by which one “removes the mind from the outer realm of the objective world to the inner realm of the inner faculty.” It was believed that the state of consciousness achieved through meditation was the same as that which existed during sleep. Today, meditation takes many forms, including guided meditation, mindfulness meditation, mantra meditation and tai chi. Its application, which primarily centers around controlling the breath and calming the mind, has gained relevance due to its role in offsetting negative health-related implications from our increasingly urbanized lifestyles.

While meditation is best known for its calming and stabilizing effects, its growing practice has led to a series of additional scientific findings. Studies show that meditation not only elevates mood and decreases depressive symptoms, but also reduces sympathetic tone and hypertension, strengthens the immune system, and limits pain perception.

We intuitively understand the connection between stress and our body’s sympathetic response. The sympathetic nervous system, associated with the “fight-or-flight” response, is part of our autonomic nervous system. When acute stressors increase this sympathetic tone, preganglionic neurons of the thoracic and lumbar spinal cord release acetylcholine, driving respective postganglionic cells to release norepinephrine to target organs. The secretion of such hormones enables survival by enhancing physiological functions such as the dilation of arterial blood vessels, bronchioles and pupils; gastrointestinal constriction; and increased heart rate. Consequently, overactivity of the sympathetic nervous system due to extended periods of stress is associated with hypertension. 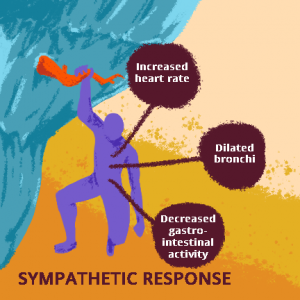 One study explored the connection between stress and autonomic response by examining the effects of integrative body-mind training (IBMT) on several physiological processes, including heart rate. IBMT emphasizes coordination between the mind and body through mindfulness and meditation. After a five-day training, the experimental group showed significant reductions in heart rate relative to the study’s control group (p < 0.01). A second study found similar effects on acute blood pressure following a week-long meditation retreat: the mean arterial blood pressure of participants (n=40) was reduced by a statistically significant value of 2-3 mm Hg. The findings of these studies indicate that consistent meditation may promote sustained reductions in both heart rate and blood pressure by lowering sympathetic activity.

The effect of mindfulness on sympathetic tone was further established in a study conducted on patients with lupus nephritis. This autoimmune condition, which is marked by sympathetic hyperactivity, is the primary cause of chronic kidney disease. The study measured the change in urinary concentrations of normetanephrine, a metabolite of the sympathetic hormone norepinephrine, following 24 weeks of daily meditation. Results showed a greater (though not statistically significant) reduction in normetanephrine concentrations in the meditation group relative to the control group. Meditating participants additionally reported statistically significant improvements in both heart rate stabilization and physical and mental qualities of life. 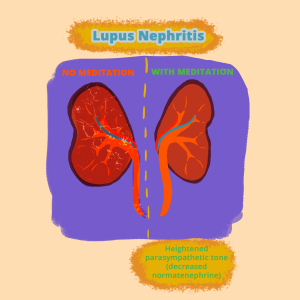 In addition to its beneficial effects on the nervous system, meditation is linked to pathophysiological declines in cardiac disease. High oxidative stress levels are associated with atherosclerosis, a potentially fatal disease in which cholesterol buildup obstructs arterial blood circulation. An experiment evaluating the effect of mindfulness-induced stress reduction found meaningful reductions in the concentration of lipid peroxide, a substance present in the arterial deposits of atherosclerosis, following meditation. The study ensured that the experimental and control groups showed no significant variation in smoking habits, fat consumption, or vitamin supplementation.

Our stress levels are also intertwined with our immune systems. Until recently, the specific mechanism of this relationship was minimally understood; current studies, however, have begun to delve into this connection more deeply. One comprehensive literary review analyzed the effects of mindfulness meditation on inflammatory markers, cell-mediated immunity, and biological aging. The study, which compiled data from 20 randomized control trials (RCTs), specifically examined the concentrations and activity of inflammatory proteins, cellular transcription factors, gene expression, immune cell count, immune cell aging, and antibody response.

During immune response, inflammatory proteins are released to induce either proinflammatory or anti-inflammatory effects. Through the facilitation of secondary mediators (such as neutrophils, glomerular cells and macrophages) and extracellular communication, these proteins protect the body from both septic shock and autoimmune distress, a condition in which antibodies secreted during immune response attack healthy tissue as a result of failed self vs. non-self recognition.

While critical in immune function at steady concentrations, an elevated inflammatory protein count can be harmful and can even impair disease recovery. One inflammatory marker commonly measured through blood testing is proinflammatory liver-derived C-reactive protein, or CRP. Of the 20 trials examined, three of the six measuring CRP levels found that mindfulness meditation yielded significant reductions in CRP concentrations in both diseased and non-diseased participants.

Transcription factors are also active components of immunoregulation. These proteins regulate gene expression by promoting or repressing the recruitment of RNA polymerase, an enzyme that initiates transcription. During the immune response, nuclear factor-ÎºB (NF-ÎºB), an activating transcription factor, promotes the activation of cytokines, which are inflammatory cell-signaling mediator proteins. This biological pathway has also been seen in blood cells during instances of high acute stress. Of the 20 independent study trials, three tested for the effect of meditation therapy on NF-ÎºB, and all three found reductions in its concentrations.

Similarly, a separate study conducted by the University of Wisconsin, Madison tested the effect of meditation on immunity by analyzing antibody counts following meditation training. The study included an experimental group (n=25) and a control group (n=16). The experimental group subjects underwent weekly meditation training and a one-time mindfulness retreat, and were instructed to meditate for one hour daily. After eight weeks of treatment, both groups were given a flu vaccination. The experimental group showed a significantly greater antibody count at both one month and two month post-vaccination timepoints compared to the control group, indicating heightened relative immune response.

In addition to stress and immune function, the natural aging process affects cellular structure and efficiency. In particular, telomeres, which are protective nucleotide sequences at the ends of chromosomes, decline in length with age. These sequences are added to our DNA by the enzyme telomerase. Due to the shortening of DNA strands that occurs during replication, aging is correlated with deteriorating cell, tissue, and subsequently, organ function. Therefore, greater telomeric length and activity are indications of good cellular health with respect to aging. Of the 20 RCTs, three examined the effects of mindfulness-based stress reduction (MBSR) on telomerase activity. All three independent studies observed increased telomerase activity amongst a diverse participation pool.

Recent studies have also examined the effects of meditation on chronic pain, which affects nearly 1.5 billion people globally and is the primary cause of disability in the United States today. As the opioid crisis continues to intensify, scientists have turned to nonpharmacological methods of pain relief. One group of researchers tested the effects of an eight week MSBR program on self-reported pain symptoms and quality of life, finding improvements in both. A second study compared the efficacies of two forms of mindfulness-based practices with usual care for chronic pain. The first experimental group followed an eight week MSBR program and found significant decreases in pain perception. The second experimental group found similar extents of pain management attained through eight weeks of cognitive behavioral therapy (CBT). While the two practices differed in their specific methodologies, their similarity in reducing pain indicates that mindfulness may be critical in pain perception. Though the specific endogenous explanation for this finding is still in question, the results are promising for the future of chronic pain management. Interestingly, the connection between mindfulness and pain predates modern medicine: Buddhist monks recognized the heightened sensory control present in consistent meditative practitioners thousands of years ago–think mind over body.

As we immerse ourselves in the chaos of our everyday lives and adapt to the new norms of pandemic survival, it is critical that we prioritize both our mental and physical health. Though the research presenting long-term physiological effects of meditation is still evolving, its findings are promising. Whether you choose to meditate to relax, fortify your immune system, or mitigate chronic pain, the broad benefits of mindfulness are abundant and undoubtedly worthwhile.

If you are interested in learning more about meditation and how to implement it into your daily life, feel free to utilize the following resources!

All figures created by Cristina Corral