A Step Into the Dark: Redefining Our Understanding of the Host-Virus Arms Race

The Red Queen hypothesis, first proposed by Leigh Van Valen in 1973, gets its name from a line in Lewis Carroll’s novel Through The Looking Glass. “You see,” says the Red Queen to Alice, “it takes all the running you can do, to keep in the same place.” The hypothesis states that while organisms do evolve to acquire reproductive advantages, they must evolve, or “run,” simply to survive. The evolutionary arms race taking place between pathogens and the hosts they infect abides by the same principle; any adaptation made by the host to better fight the invader will surely be met by pathogenic counter-evolution to better evade the host’s immune system. It is a perpetually escalating conflict as old as life on earth, and yet despite its age the biological mechanisms behind these adaptations and the consequences they may have on human vulnerability are still widely unknown. Through the use of cutting edge technologies across a wide variety of fields like comparative genomics, mechanistic biochemistry, virology, and immunology, UC San Diego researcher and assistant professor Dr. Matthew Daugherty has set out to answer these questions.

While the clash between pathogens and their hosts may not involve the sort of weaponry that comes to mind when hearing the phrase “arms race,” both sides are nonetheless equipped with machinery designed for the sole purpose of war. In a simplified example, when a virus infects a cell, it takes over the cell’s reproductive capabilities and repurposes them to replicate more viruses, called virions. Once the virions have matured, they bud out of the host cell to go out and infect others. However, in some cases when those virions try to leave, a protein called Tetherin binds to them and “tethers” them back to the host cell’s membrane, which prevents them from escaping. Over time, ancestors of the human immunodeficiency virus (HIV) evolved to generate proteins that antagonize Tetherin and render it ineffective. In response to the new threat, host cells then modified Tetherin to regain its antiviral capacity. This regaining of function would only be temporary, though, as HIV would later generate novel proteins to again interfere with Tetherin. In step with the Red Queen hypothesis, this evolutionary game of cat-and-mouse results in ever more innovative adaptations that are increasingly difficult to overcome.

Dr. Daugherty, who received his PhD from UCSF and conducted his postdoctoral training at the Fred Hutchinson Cancer Research Center, leads a team of researchers in discovering and cataloging the complex biological framework responsible for pathogen-host evolution. Despite having only joined the UC San Diego staff a little over 2 years ago, he has already won a Pew Biomedical Scholars award for the boldness and creativity of his pursuit. While his innovative approach is what sets his work apart from many others, it simultaneously serves as his greatest obstacle as well. The traditional and most widely utilized approach to scientific exploration has been to take an idea or concept that is thought to be understood and then expand upon it. Though surely a methodology that is tried and true, Dr. Daugherty believes that it is reminiscent of a cautioning metaphor. In it, a police officer comes upon a man looking for his keys under a streetlight at night. After a short while of helping search for them, the officer asks the man if he’s sure that is was there where he lost his keys. No, says the man, he had lost them across the road. The officer then asks why the man is searching here, to which the man replies “because this is where the light is.” Instead of staying under the streetlight by trying to expand on what scientists may already understand, Dr. Daugherty and his team are letting viruses and the immune system guide them into the dark of uncharted territory in hopes of finding new biological functions, immune mechanisms, and new potential points of intervention against pathogens.

To do this, the Daugherty lab begins by using bioinformatic and computational analyses to compare genetic sequences across a multitude of species and viruses, searching for certain genetic signatures that indicate what areas of the genome are likely to be involved in pathogen-host conflicts. Once identified, these evolutionary signatures, like rapid evolution at a particular site in the genome or the birth or death of a gene, are then used to devise experiments that will shed light on why a mutation may have occurred, the mechanism by which it developed, and if that evolutionary mechanism is still used in modern conflicts. In conjunction with cutting-edge technologies like genome editing tool CRISPR/Cas9 and an arsenal of infectious viruses like Sindbis, Vaccinia, and Coxsackie to work with, this methodology has resulted in the Daugherty Lab making several novel discoveries, including the identification of a new immune gene and never previously observed interactions between various immune and viral factors. Other key aspects of the Daugherty Lab’s research include understanding how the immune system differentiates itself from foreign invaders, how viruses can steal genes from other organisms and employ them in the war against their hosts, and how all of these things together may affect human susceptibility in the future.

As a basic scientific researcher, the purpose of Dr. Daugherty’s work isn’t to answer a specific question or solve a particular problem at hand – rather, it is to better understand the complex and diverse world that we live in. But as the host-pathogen arms race inevitably continues to escalate, key discoveries like those made by the Daugherty lab in understanding how and why these adaptations occur will provide the critical foundation necessary for the development of biomedical therapeutics in the future. 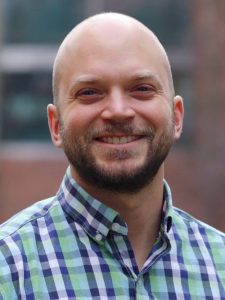