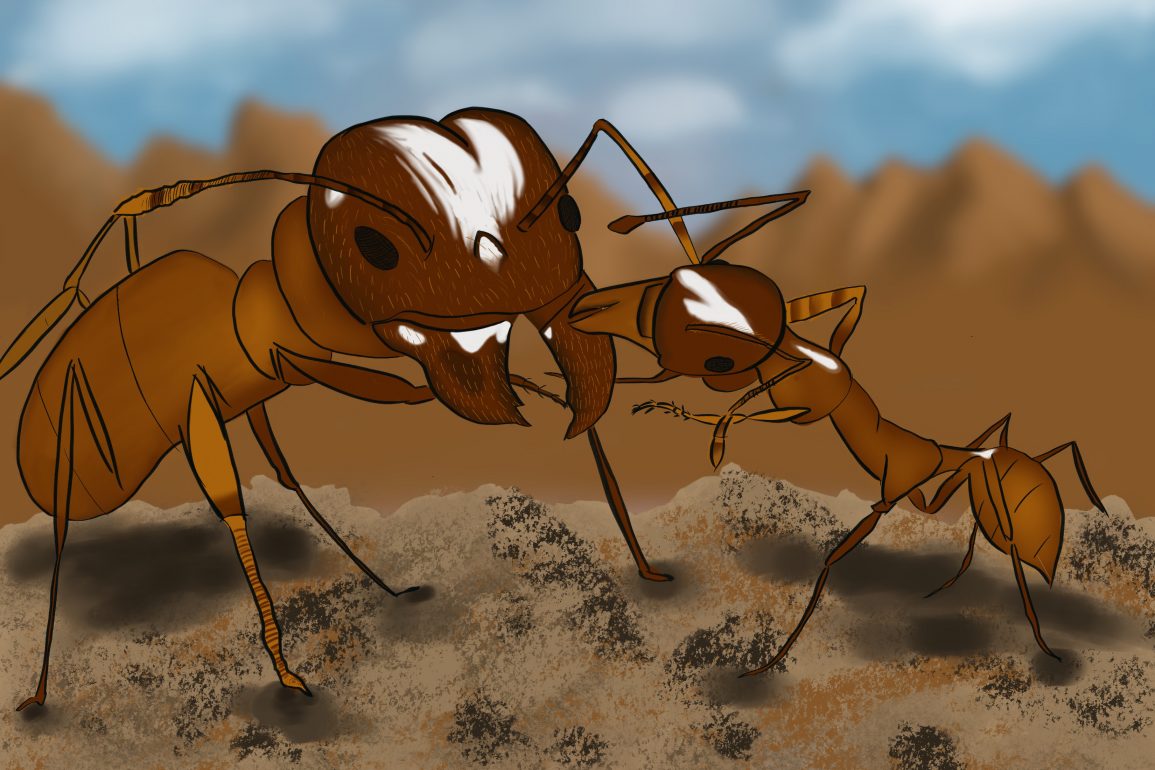 The Sun Never Sets on the Ant Empire

The world has seen many wars stemming from the desire for world domination. We have fought countless battles in an attempt to take over new lands and commandeer new resources. History books have been written discussing the battle tactics used, the strategies that worked well, ill-fated decisions, and the psychology behind the most prominent military leaders; however, the longest, largest, and most successful battle for hegemony has gone virtually unnoticed, even as it continues today. This exhaustive war has resulted in the colonization of entire continents and the complete annihilation of endemic populations. On its most active front alone, it generates 30 million casualties every year. The conflict has been occurring since the 1800s, and it has now resulted in one entity dominating every land mass in the world except for Antarctica, yet we only just recently noticed.

This is probably because the average militant is a mere 3 millimeters tall. In the largest war ever fought in the animal kingdom in the entire history of life on Earth, the Argentine ant species Linepithema humile has quickly and quietly taken over the entire world, wiping out all other ant species in its path.

Ants have an inherently militant nature, and they share a powerful natural drive to protect their colony. There are essentially two types of ants in a colony: the queen and the worker ants. The queen’s sole function is to reproduce and maintain the population of worker ants. The worker ants are responsible for collecting food, growing the physical environment of the colony, and protecting the queen as well as their overall territory.  The insect world is brutal; since rival populations can quickly smother each other, competition for space and resources is fierce. This competition has favored the evolution of very effective attack behaviors in ants. Any ant from a foreign colony, even if it is from the same species, will be immediately recognized as a foreign invader, and will be targeted for elimination.

L. humile, the Argentine ant, is especially adept at insect warfare. In its natural range, it is widely accepted as one of the more vicious and territorial insects. L. humile colonies within the natural range have genetic variations between populations that allows them to recognize each other’s colony of origin. This genetic distinction manifests itself as a distinct “smell” to the ants. In actuality, this smell is a combination of hydrocarbons unique to each colony. The ants use their antennae to examine the hydrocarbon structure on another ant’s exoskeleton, and they use that information to decide whether to attack or not.

In the 1800s, this recognition mechanism was fundamentally changed due to the trans-Atlantic trade. Ships leaving South America for Europe took some hitchhiking Argentine ants along with them. These international traveling ants repopulated very quickly, establishing colonies in the Old World. After a few generations, the ants began behaving very strangely. In this new continent and unfamiliar environment, L. humile ants from different colonies did not attack one another; instead, upon coming into contact with L. humile ants from different colonies, they greeted each other like old friends. These colonies formed a kind of an alliance, and so multiple colonies with their own queens became a loose collection in a larger colony. This new cooperative social behavior began a territorial conquest that would make L. humile one of the most dominant species in the world.

As L. humile is one of the most skilled ant species in terms of militant behavior and colony attack tactics, it quickly swept through Europe and established a population that spanned the entire continent. As an invasive species with no established niche in the food chain, these ants had a powerful competitive advantage over other ant species. Their domination of Europe had a key consequence: Europe in the 1800s was a center of global trade. Ships were leaving for other parts of the world all the time, and just as it happened before, hitchhiking L. humile ants went along for the ride. The same pattern of colony establishment followed, and soon the Argentine ants took over large expanses of land all over the world. In every single one of these new territories, the species formed alliances within their own colonies. Today, we refer to these collections of ants as supercolonies.

There is a biochemical explanation for this sudden newfound behavior in L. humile ants. When the ants hitched a ride to Europe in the 1800s, a classic genetic bottleneck effect occurred. The ant population that established itself in Europe was dramatically less genetically diverse than the host population in South America was. As mentioned previously, ants recognize each other and rival ants from foreign colonies through the unique hydrocarbon makeup on their exoskeleton. As the ants brought to Europe and their resultant population were less genetically diverse, so too were their hydrocarbon signatures. The Argentine ants in Europe, upon “smelling” ants from different colonies, sensed a similar hydrocarbon makeup to their own, which is why they recognized one another as kin. This pattern persisted as the ants continued to expand outward from Europe to territories across the globe to develop immense supercolonies. Over time as this pattern continued, 3 massive supercolonies emerged. These are the American, European, and Japanese colonies, which have territories covering the entirety of their respective landmasses. 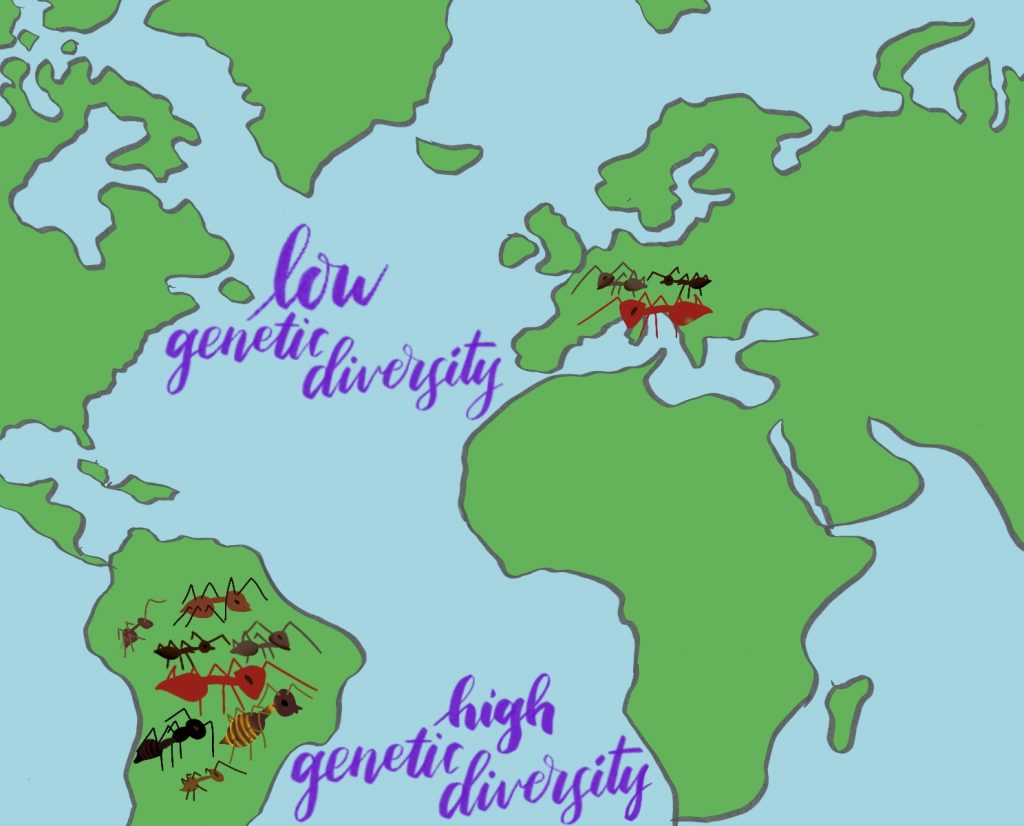 But it gets even more complicated than that. Recent studies of the hydrocarbon makeup of these colonies have shown that even these three supercolonies are genetically similar. This makes sense as they originated from the same supercolony in Europe. Experiments on these ants have shown that individuals from separate continents may choose not to attack each other. This has led to the hypothesis that there might not even be three separate supercolonies, but rather one global megacolony.

However, world domination is complicated, and it is never perfect. The ant supercolonies have been experiencing internal coup d’etats. It is unclear what exactly is the trigger for this behavior, whether it is an actual change in the hydrocarbon makeup, or if

its an environmental effect on their social behavior. Regardless, schisms have begun to form, and the L. humile ants have reverted back to fighting each other in extraordinarily brutal ways. While these ants had been in a peaceful alliance for so long, they still remain some of the best fighters in the insect world. In California, a massive break from the North American supercolony occurred, resulting in what is now the California Massive Colony. One of the front lines between the two warring sides is in San Diego. The front lines of this war extend for miles in either direction, and every year, 30 million ants give up their lives in defense of their supercolony.

How do you measure what’s going on in a war you can barely see? There are a couple of techniques that have been developed to measure ant warfare behavior, many of them developed along the front line at the University of California, San Diego. One of the experiments that yields the most conclusive results is simply mixing ants together from different parts of the world, and seeing what happens. For example, you can mix ants from Argentina with ants from other places around the world and see how they react, or mix ants from either side of the front line in San Diego and observe whether they attack on another. This method is largely how the global megacolony was discovered. More specific methods involve determining the actual hydrocarbon makeup of rival ant colonies. This allows researchers to determine in what ways this signature differs, and how different they have to be in order to trigger an attack response.

The largest and most successful world conquest happened quickly and silently, with barely anyone taking notice, even as it rages on today. The politics and alliances of the global ant war are changing constantly. Scientists are trying to keep up, but ants are vastly more complicated and calculating than we anticipated. As L. humile continues to exert its influence over the ecosystem of entire continents, one thing has become clear: the world now belongs to the ants.