Heat rises, but carbon sinks: The role of the carbon cycle in climate change

Fig 1. Phaeodaria, as depicted above, play a key role in the global carbon cycle (Source)

With heated debate currently taking place about global warming, several scientists are expressing their concern about the rise in carbon dioxide levels in the atmosphere, suggesting that it is one of the key reasons for global warming. A rise in carbon dioxide levels will affect the quantity and movement of carbon as it is recycled from the biosphere to the atmosphere, from its inorganic forms to its organic forms. This shift in the cycle would start affecting small events such as rates of photosynthesis in plants as well as large-scale phenomena such as regional climate. Hence, many climatologists have begun searching for methods through which the carbon cycle can be modified to balance this rise in carbon dioxide. To solve these problems, researchers are looking in the depths of the ocean, as deep as the mesopelagic poorly lit twilight zone.

Scientists discovered that the key players affecting the carbon cycle in the ocean are microorganisms such as phytoplankton, zooplankton, and rhizaria. Phytoplankton are known as the “grass of the sea” due to their ability to perform photosynthesis. They use solar energy to produce other carbon-containing compounds, thereby acting as the biological carbon pump. Uncontrolled reproduction of phytoplankton can form a layer of algae on the surface of the ocean which gives the water a greenish appearance and cuts off any form of oxygen supply to the marine life. Zooplankton are responsible for keeping this algal bloom in control by consuming phytoplankton. Their key role is to consume organic carbon matter and present it to rhizaria in a form that the rhizaria can deposit on their shells. Rhizaria are a form of eukaryotes primarily found in the twilight zone of the ocean, where plants cannot perform photosynthesis due to the absence of light. To survive, rhizaria utilize carbon-containing molecules that can be used in their own metabolic processes. They have calcium carbonate walls which are able to lock in huge quantities of organic carbon from the ocean waters. This allows them to act as a carbon sink which is essential in expelling carbon from the carbon cycle. The level of organization in the system in which these micro-organisms interact with each other to circulate different forms of carbon throughout the ocean is incredibly intricate. With collaborators at Florida State University, the University of South Alabama, and the Dauphin Island Sea Lab, researchers at the Scripps Institution of Oceanography at UC San Diego explain the way carbon is transported from the surface to the seabed (Stukel, 2018). To start off the cycle, phytoplankton at the surface of the ocean convert carbon dioxide into an organic form of carbon. Since phytoplankton have a short lifespan, they start decaying quickly. These dead organisms, fecal matter and other amalgamated packages of organic particles sink towards the gloaming in the seabed where zooplankton scavenge them. The zooplankton grab the fast-sinking particle snow, which fall too fast for the rhizaria to consume. Once the zooplankton excrete their feast, the rhizaria get to work, storing most of the carbon they collect in their shells. Throughout the entire process, 70% of the initial carbon dioxide is returned to the atmosphere. 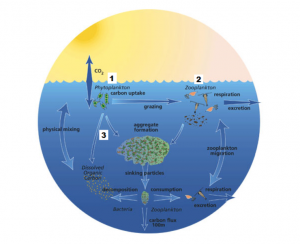 This method is extremely effective in recycling a small amount of the carbon dioxide that enters the ocean and sending it back to the atmosphere. The rest of the carbon gets dumped into the seabed, a biological carbon dump not involved in the carbon cycle. This process is responsible for reducing carbon dioxide in the atmosphere by about 200 parts per million. Without this system, the carbon dioxide concentration today would reach a toxic amount of 500 parts per million. To this day, this system of phytoplankton, zooplankton and rhizaria, have effectively locked up 99% of the Earth’s carbon in the depths of the ocean floor (Source). 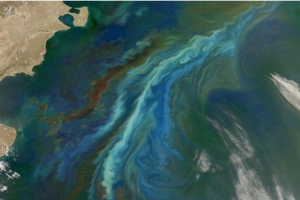 Although scientists have a good sense of what is happening with carbon dioxide trends on a global scale, regional information is required to manage carbon emissions at the grassroots level. This research could indicate the need for a re-evaluation of how carbon circulates throughout the ocean and a new appraisal of the role these microorganisms might play in Earth’s shifting climate (Stukel, 2018).  We must understand regional variations in the sources and sinks of carbon dioxide because they help identify possible sequestration or emission management options.

Marine sequestration is one of the schemes that scientists propose to tackle the situation. This scheme advocates the attempt to reduce atmospheric carbon dioxide concentrations by altering the oceans’ natural carbon cycle. This can be accomplished by adding iron to the ocean, thus stimulating phytoplankton blooms. Given that phytoplankton effectively trap atmospheric carbon dioxide in the ocean, some of the challenges that result from the high concentration of this compound in the air could be resolved. This idea is highly controversial because it traps more atmospheric CO₂ in an already too-acidic ocean and it has detrimental repercussions on marine life. An increase in acidity in the ocean waters would start dissolving coral reefs and has already reduced the number of species residing in these reefs by 21–32% (Ligia, 2015). Hence, scientists continue to look into alternative methods by which the carbon dioxide levels can be controlled without affecting the ecological balance much. Additionally, by understanding how much carbon is bound up annually in the ocean beds, climatologists will be able to predict the effect of changing environmental conditions on the climate and eradicate a great deal of uncertainty regarding climate conditions in the future.