With current projections predicting the depletion of fossil fuel reserves being by 2088, biofuels are seeing a resurgence in funding and awareness. The field of alternative energy is open to all kinds of new perspectives and technological advances, a great opportunity for creative up-and-coming biologists. This research may seem difficult to get into, but research on biofuels from algae has been ongoing at UC San Diego since 2008. In fact, UC San Diego’s algae biofuel research was ranked the best program in the nation from 2012-2016 by U.S. Department of Energy.

Dr. Jonathan Shurin is an aquatic ecologist and UC San Diego professor whose lab looks at resources and water quality in native aquatic environments; until recently, he was researching sustainable algae-based biofuels. In 2010, he arrived in San Diego and met Dr. Stephen Mayfield, a molecular biologist teaching at UC San Diego who worked on algae biofuels alongside the California Center for Algae Biotechnology (Cal-CAB). Dr. Shurin describes described the biofuel community as a mix of cell biology and bioengineering, without much consideration for the ecological side of biofuel. In 2014, he received a four-year grant to fill that missing niche.

The best algae for the job grow quickly, use few resources, and produce high amounts of oils (what is actually used for fuel). With over 100,000 species, algae are one of the most diverse groups of organisms on Earth. This makes choosing the best species to use for fuel a daunting task. One of the solutions that the Shurin lab on campus has considered is growing different combinations of algae together. Different oil-producing, fast-growing species may use different resources, so growing them together creates more fuel from fewer resources. According to Shurin, algae are also useful fuel sources because they can “theoretically be grown anywhere”. The amount of space needed to grow enough algae for fuel is far smaller than the space needed for soybeans or corn for fuel purposes. 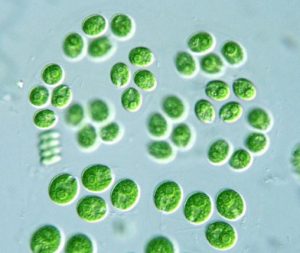 Despite algae-based biofuels’ accessibility and potential abundance, there are some major issues with the source that the Shurin lab and others are working on addressing. When fossil fuels are cheap, biofuel research is much more expensive. While currently expensive to research and produce, biofuels are getting cheaper as new discoveries and technologies are made. The biggest issue with algae as a biofuel is that it isn’t commercially viable at this point in time, but Shurin’s ecological research, coupled with genetic and molecular research, is focused on finding the best options. Lastly, growing algae outside of a lab is very difficult, as it is costly and difficult to provide a sterile environment on a large scale. The larger the growing space, especially outdoors, the greater the risk of contamination by bacteria or unwanted algae species. In the lab, Shurin and his researchers grew numerous different species both alone and in two or more species cultures and analyzed their growth rate, oil output, and resource use. They found that algae species with larger cells tended to grow quickly and produce more oil while requiring fewer resources like light and nutrients. Some pairs performed exceptionally well together, while other groups were not able to produce as much oil or biomass together as they were when grown alone. When the resources and funding to maintain a large growing environment become available, the right combinations of algae have the potential to take the biofuel industry by storm. 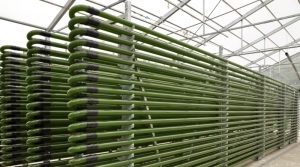 One of the styles of growing space for algae biofuels, maximizing the space and amount of algae while minimizing contamination risk. (Source)

Aspiring biofuel researchers at UC San Diego may not be able to work on algae biofuels with Shurin at the moment, but he offered advice to students hoping to enter the field. A recent B.S./M.S. student working with Shurin studied synthetic genomics, while other researchers specialized in a wide variety of biological tools: culturing, genetics, molecular biology, and ecology all have an important place in the biofuel industry. According to Shurin, biofuel is still a very new field, and is full of niches that have yet to be filled by future researchers.

This article’s featured image shows one of the three algae growing areas at the Ludwig Boelkow Campus, and can be found here.