Taking the Bite Out of Pathogens: How Researchers at UC San Diego Are Divorcing Mosquitos from Malaria and Other Infectious Diseases 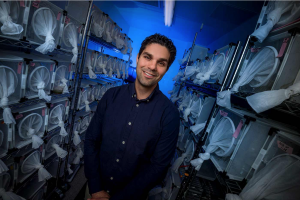 At UC San Diego, Dr. Omar Akbari pioneers a new method to combat some of the world’s deadliest contagions. (Source)

Picture the deadliest animal in the world. What comes to mind? Fearsome teeth, bulging muscles, and lethal venom? Great white sharks, Bengal tigers, and black mambas? In reality, the deadliest animal in the world has none of these features, is smaller than a fly and causes the deaths of more than one million people every year. Mosquitos, and the pathogens they spread, are far more insidious threats to humankind than the creatures that attract most of the public’s attention.

Junru Liu, a third-year undergraduate at UC San Diego, has the joined the war on these grim reapers. Earlier this year, Liu responded to an intriguing post on Port Triton. By the middle of winter quarter, she was working in Dr. Omar Akbari’s laboratory, and became a part of an international network that is pioneering the use of genetic drive to combat infectious diseases like malaria, West Nile, and Zika.

Globally, these pandemics are still a scourge on humankind. According to Akbari, deaths caused by mosquitoes are often underreported, artificially suppressing the mortality rate of these diseases. To control mosquitos, vulnerable communities often drain wetlands or employ pesticides, but both of these practices carry a considerable environmental toll. Moreover, as Liu points out, traditional means of combating infectious disease usually run up against microevolution: vectors accumulate resistance, making disease-fighting strategies less effective. Consider the rise of antibiotic-resistant bacteria in industrialized countries, for example, and imagine the calamity if a similar outcome was replicated in mosquito-borne illnesses in the developing world.

Clearly, a new approach was wanting. Dr. Akbari entered the field of vector control as an undergraduate at the University of Nevada in Reno. Interning as a public servant in vector control, Akbari became more aware about deficiencies in the current methods for controlling mosquitos. Gradually, his interest turned to a new technology that promised to be less expensive, more sustainable and more self-scaling: genetic drive, a principle based on the revolutionary gene editing tool CRISPR/Cas9.

Genetic drive works, in Liu’s words, by replacing a wild-type trait with a trait that has been specifically tailored by researchers. The Akbari Lab focuses on eliminating the gene in mosquitoes that allows them to transmit pathogens and replacing it with a gene that makes the mosquito body inhospitable to infectious agents. According to traditional Mendelian genetics, once this gene has been introduced into a breeding population, it could be expected to either spread or evaporate, depending on how it influences the reproductive fitness of the mosquito. But genetic drive goes one step further, Akbari explains.

Without genetic drive, there is only a fifty-percent chance that the target gene will be passed onto offspring. Genetic drive, however, cuts and pastes the target gene into the chromosomes from both parents, rather than just one. As a result, it is almost certain that all offspring will inherit the gene.

There are two ways to apply this to vector control, says Akbari. The first is to target recessive genes that lower female viability, reducing the mosquito population as a whole. The second is to increase the frequency of a gene that makes mosquitoes unable to carry or spread the pathogen. This option, while less tempting than the first for anyone scratching a bite, would avert the ecological consequences of extinguishing an entire species. At the same time, it provides the hope that impoverished regions may be liberated from, say, the parasite that causes malaria, or other deadly vectors.

The day that this could happen is still some time away, Akbari and Liu say. Liu is still tinkering with Drosophila fruit flies, which are a good model for their vector relatives. Meanwhile, others in the Akbari lab are sequencing the genotypes of different mosquito species, finding microRNA target sites for CRISPR/Cas9 to intervene, splicing out the culprit gene that hands the reins of the global mosquito population to lethal diseases. At the moment, Akbari’s personal goal is to develop a cassette to eradicate Zika, while others contribute to gene drives for malaria and dengue virus. Not far in the future, Liu envisions eggs of genetically modified mosquitoes that are grown in a lab at UC San Diego and delivered to developing regions around the world. There, those mosquitoes and their offspring will be unable to spread the pathogens that cause deadly diseases, hastening the demise of those diseases. The network of laboratories working toward sustainable and long-term vector control, Akbari believes, reflects the global scale of the issue, and the impact that a solution like genetic drive could have.

Before that promise is realized, Akbari foresees two hurdles to his research: one technical and another ethical. At this point, genetic drive is not as robust as desired, and would likely breakdown and become less efficient over an evolutionary scale. An even greater challenge, Akbari says, is getting the public, stakeholders, and governments on board with the wide-scale release of genetically modified mosquitoes. Genetic drive cannot be confined to one region, he points out, so the engineered genes could potentially spread across the entire planet. Copious testing would be required to monitor the effects of genetic drive on the global ecosystem. Moreover, Akbari believes that listening to concerns and educating the public with data and logic is a vital piece of the puzzle.

For now, Liu herself is more focused on the technical problems at hand. Until the day that millions of people can afford to be less afraid of an ominous buzz or an itchy bite, she and other members of the Akbari Lab will remain hard at work developing life-saving technologies on a grand scale and pushing the possibilities of the life sciences. Liu has considered pursuing a PhD with the Akbari Lab once she finishes her undergraduate career: after all, it isn’t often that a college student gets a chance to help work on techniques that could improve the health and safety of countless people worldwide.