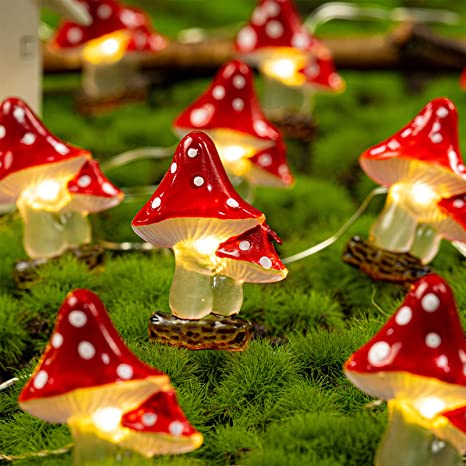 In the world of TikTok, the aesthetic of “cottagecore” has become a growing fascination: romanticizing the wilderness and a simplified countryside lifestyle. One lucky crop has become the star of cottagecore vibes: mushrooms! From vintage mushroom posters to crocheted mushroom hats, this fascination with fungi has taken Gen Z by storm. But what exactly makes these toadstools so tantalizing?

Tens of thousands of mushrooms exist, of which 2,189 species of them are edible and 2,006 are safe to eat. With so many different textures and flavors to explore, there’s certain to be a mushroom for every mushroom hater! Generally, stronger-tasting mushrooms have a denser texture, as there are fewer pockets for water within. For example, big portobello mushrooms have a stronger meatier flavor, while small morel mushrooms have a smokier taste the darker their color. This unique and natural “meaty” taste is known as umami, which is why it’s a great substitute for meat alternatives! From subtle meat swaps in tacos to bold slices of mushroom steak, they work in just about anything and can surprise even the most carnivorous of consumers!

We can thank glutamate, an amino acid that is naturally present in mushrooms, for this distinct taste. If that sounds familiar, it could be because it’s also a neurotransmitter produced by our bodies for proper brain function and memory. Humans also have a processed form of glutamate called monosodium glutamate, or MSG, as a flavor enhancer in soups or meats. The health concerns of MSG is still heavily debated and researched, but fortunately the glutamate found in mushrooms is completely safe and delicious!

Besides being delicious, an added bonus are the numerous health benefits. The polysaccharides, polyphenols, and carotenoids found in mushrooms have been linked to antioxidant, anti-inflammatory, and anticancer effects. Polysaccharides act as a prebiotic, or food for beneficial gut bacteria, and therefore promote better gut health.

Mushrooms also help the body on an immunological level. They help stimulate cytokine production (small proteins that act as mediators in an immune response), natural killer cell (a type of white blood cell) activity, and phagocytosis, all of which speed up tumor destruction and cellular immunity. Who knew mushrooms were this insanely overpowered?

If these superpowers aren’t enough to convince you, they’re also full of minerals and vitamin B, phosphorus, copper, selenium, and potassium. Interestingly, the amount of vitamin D a mushroom has depends on its UV light exposure. Ergosterol, an organic compound that maintains fungi cell membrane integrity, transforms into Vitamin D when hit by UV light, either from the sun or a safe artificial source. Be sure to keep an eye out for the packaging on commercially grown mushrooms that says “UV-treated” or “rich in vitamin D”! So if you ever meet a person who doesn’t give a shiitake about mushrooms, let them know what they’re missing out on.

Despite what these super-vegetables offer, the mushrooms that we see above ground aren’t all that meets the eye. In fact, they’re not even plants, but rather the reproductive fruit of fungi, hence what makes them fun-guys. Like seeds, fungi produce little reproductive units called spores. These are released from the mushroom “fruit” to float off and find a suitable place to germinate, like on soil or wood. The almost invisible roots that spread from the spores are called mycelium.

Yes, mycelium are in fact not just faraway islands in Minecraft, but rather an expansive root network spreading for miles and miles. Mycelium are the primary “plant” portion of fungi that can exist for up to hundreds or thousands of years, while the mushroom bodies that sprout above ground represent only less than 5% of a fungi’s life cycle, whether it be a couple of days or many years. Hyphae, little hair-like structures, make up the mycelium and are responsible for digesting organic matter by secreting digestive enzymes, like amylases, to break down nutrients which are then absorbed as food.

When I think of how mushrooms spread spores, it makes sense to think of a stray wind blowing them around randomly, like dandelion seeds. But it can be a bit more complicated than that. Some mushrooms, like puffballs, can expel spores by releasing a cloud of air from their gills located on the underside of the mushroom cap. A study done on basidiomycete fungi shows that the air around its cap is cooler due to water vapor loss, creating a slow airflow that lifts the spores into the air to float. This “manipulation of buoyancy” can explain the high water needs all mushrooms require, as well as how mushrooms can continue reproducing even in low-wind conditions and with no way of releasing pressurized air. Spores can also travel directly in water, where some have a tail of sorts to “swim” around while others wait for rain to hit the cap to release spores. Some mushrooms also rely on insects or small animals, similar to how flowers work with pollinators, by using attractive aromas that draw critters towards them. With 810 million years of history on Earth, the resiliency of mushroom reproduction is truly a lot to take in!

So we know how mycelium manifestation occurs in the wild. But how do we mass-produce them for commercial cultivation? Well, growers actually don’t use the spores to grow mushrooms directly; they germinate too unpredictably. Instead, spores get germinated in specific facilities where they can propagate mycelium in a controlled environment—this becomes the “spawn” for the mushrooms. It’s then mixed into conditioned compost made specifically for growing, and with the right ventilation, water, and temperature, they will sprout!

You Got A Friend In Mycelium!

Mushrooms are fantastic sources of food, but it also goes much deeper. We all know that fungi are great decomposers that work ground-level to break down organic matter, like wood or dead animals. This returns essential minerals and nutrients back into the soil for other new plants. But mushrooms aren’t only rejuvenating forest floors—they’re proliferating them. A study done on pyrophilous (burn-loving) fungi showed that its mycelium binds and stabilizes soil after forest fires. Although forest fires are helpful in clearing debris and opening up sunlight, an initial consequence is a slow start in new growth that reduces biodiversity. But because of its extensive mycelium networks, pyrophilous fungi can replenish the land for plant regeneration in early recovery stages, as well as decompose burned material, sequester carbon, and retain nitrogen in the soil—a true icon for life and death.

Mushrooms also work directly with plants and trees—this symbiotic fungus-root association is known as mycorrhizae. The roots provide nutrients and a stable site for the mycelium to entangle and produce the hair-like structures of hyphae, and in return, the hyphae increase and store the amount of water and nutrients that the plant can take in. This is especially helpful for desert plants, where little water and nutrients are available. Mycorrhizae can even break down rocks, providing essential minerals like potassium, calcium, and magnesium. Talk about a loving and equal relationship!

With global warming rapidly accelerating, solutions toward addressing carbon dioxide output are becoming more and more important. Once again, mushrooms come to the rescue! Forests act as large carbon sinks where the soil acts as a sponge absorbing carbon dioxide from the atmosphere. In fact, symbiotic mycorrhizae take in 50%-70% of all carbon sequestered in forests. A study found that ecosystems with mycorrhizal vegetation stored 350 gigatons of carbon, compared to the 29 gigatons stored in non-mycorrhizal vegetation. But it isn’t enough; humans are rapidly emitting much more than these mushrooms can handle. And because of deforestation and other human activities, soil and mycelium are also being ripped apart, releasing tons of carbon dioxide back into the atmosphere and undoing any progress forests make.

The popularity and romanticization of mushrooms in pop culture are well deserved, but the nutritional value and underground abilities that they really provide right under our toes is a marvel in and of itself, a true superhero fit for a movie (MCU, call me). Mushrooms are such versatile sources; from fashion inspo and cap tapping ASMR (yes, that’s a thing) to literally holding our world together in a world wide web. Who can’t find love for spore-spawning fungal perfection?