With the good news that giant pandas are no longer on the Endangered Species list, it’s time to take a look at all of the lists predicting extinction risk for different species. What do the many conservationist terms mean, and why are they so important?

Endangered species lists use many terms to classify the level of risk that a species faces, describing the likelihood that the species will go extinct without fast intervention. These terms refer to a species’ “conservation status.” There are three major categories of endangered species, with slightly different names depending on the list. The global system, used by the International Union for the Conservation of Nature (IUCN) Red List, uses these names: Critically Endangered, Endangered, and Vulnerable. Additionally, Least Concern and Near Threatened species are at a low risk of extinction. Species labeled Extinct in the Wild can only be found in captivity, and Extinct species are completely wiped out. Here’s a visual representation of the continuum of IUCN terms: 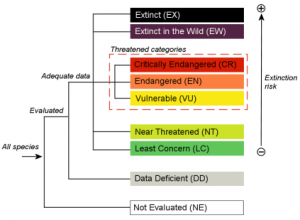 The United States and the World Wildlife Fund (WWF) use a three category system, with slightly altered names: Endangered, Threatened, and Vulnerable. That list can be found here. This slightly different system can be compared to IUCN’s threatened categories as follows:

Species that are critically endangered almost always require some kind of intervention, usually a combination of multiple tactics. In the U.S. we have the Endangered Species Act, which makes it illegal “to harass, harm, pursue, hunt, shoot, wound, kill, trap, capture, or collect or attempt to engage in any such conduct” with an animal listed as threatened or endangered. Unfortunately, the only way endangered plant species receive these protections is on federal land. This act also makes international and interstate trading of these plants and animals — and their parts — illegal as well.

The U.S. lists conservation status based on these factors:

The final aspect is more important than previously thought. According to a study done at Columbia University, when calculating the conservation status of a species for the IUCN Red List, those researchers may be overestimating the geographical range that each species can survive in. By overestimating the area available to them, they may be underestimating the risk of extinction. By reexamining the suitable habitat for 18 species of birds examined by the IUCN, the researchers found that the IUCN’s geographic range contained vast amounts of unsuitable habitat for 17 of the 18 species. This means that the extinction risk for 17 of the 18 species was definitively underestimated.

While getting off the endangered species list is a definite success, species who are removed are then listed as Threatened. We can’t let species like the giant panda slide off the radar after minor successes, because without continued legislation and monitoring, they’ll end up back on the Endangered list again.

The featured image for this article can be found here.