Being stuck with summer courses at UC San Diego may put a dent in your travel plans, but it does come with one (pretty big) silver lining. The coastal waters off La Jolla bear witness to the world’s largest gathering of blue whales, the most massive animals ever to live on Earth. Between 2,000 and 3,000 of these mammals, Balaenoptera musculus, will feast on California’s abundant krill from mid-June until September, when they will continue on migratory routes spanning the globe.

Blue whales, and whales in general, enthrall the public for a number of reasons, but of these their sheer immensity might be the most astounding. A blue whale can grow up to 100 feet and weigh up to 200 tons. An African elephant, the largest living land animal, is about as heavy as a blue whale’s tongue.

The evolutionary explanation for whales’ sheer size has long been shrouded in the prehistory of the sea. A recent study, however, may explain why they became so colossal, and also points to what the future has in store for these creatures. 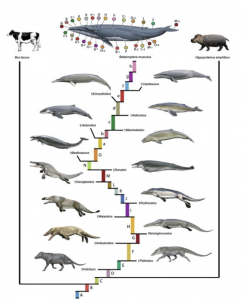 The fossil record of baleen whales is, in the words of the Royal Society researchers, “excellent.” Paleontologists can trace the traits of modern-day cetaceans to their extinct, early ancestors. (Source)

First, what we already know: about 50 million years before UC San Diego was built, a particular mammal species decided that it was time to return to the ocean, more than 300 million years since its progenitors had splashed ashore. About 25 million years ago, a new clade, Mysticeti, evolved baleen for filter-feeding. Today, all cetaceans are either baleen whales, like humpbacks and blue whales, or toothed whales, like orcas and sperm whales.

Despite having ample opportunity to put on extra tons, the earliest baleen whales were to remain modestly-sized for the ensuing epochs. It wasn’t until between 3.5 million and a few hundred thousand years ago that baleen whales began to assume jumbo proportions, and their smaller brethren started to perish. Scientists suspected that this might have to do with the dawn of the most recent ice age, which took place a few million years ago: as animals grow larger, their ratio of body mass to surface area increases, making them better adapted to retaining body heat in a cold environment. The Earth, however, had been on a cooling trend since the demise of the dinosaurs, and cetacean gigantism was a sudden reaction to something that happened within the past few million years.

A new study published by the Royal Society of London proposes another impetus–the same force that is luring thousands of blue whales to the waters off San Diego: krill. Researchers Graham J. Slater, Jeremy A. Goldbogen, and Nicholas D. Pyenson studied the fossil record in addition to recordings of beach strandings, aerial sightings, and aboriginal hunts in order to estimate the dimensions of 76 living and extinct baleen whale species. This was then matched to phylogenetic data that tried to pinpoint the timing of each species’ evolution. To the resulting dataset, the authors compared a series of macroevolutionary models in order to determine which environmental cue best explained the growth pattern.

Body-size and phylogenetic data show that baleen whales rapidly evolved toward immense mass, or gigantism, only within the past few million years. This trend cannot be explained solely by global ocean temperature, which researchers measure by the abundance of the oxygen-18 isotope. (Source)

The most probable model holds that krill served as an intermediary between the changing climate and the body mass of their predators. Before whale gigantism evolved, nutrients, and thereby krill, were distributed more or less evenly throughout the ocean. Then, several million years ago, the cooling trend finally manifested in ice around the North Pole. When this ice melted in summer, it unloaded vast quantities of nutrients off certain coastlines. Simultaneously, changing weather patterns pushed warm water away from shore and spawned an upwell of cooler, nutrient-rich water that would attract teeming swarms of whale-food.

In summation, the creation of the ice-caps caused krill to congregate around coastlines and abandon the center of the ocean. This allowed larger whales to take larger bites of denser prey assemblages. Greater girth also accommodated more blubber, or whale fat, which sustained the colossal creatures as they migrated between coastal feeding grounds. As a result, natural selection drove baleen whales to attain their astounding proportions.

The researchers of the Royal Society do note a concerning implication of the study: the survival of massive whales relies on the existing densities of ocean nutrients, which in turn rely on a sufficiently cold planet, the future of which has been imperiled by human activities since the Industrial Revolution. Currently, many whale populations, including that of Balaenoptera musculus, have been are on the uptick since the 1966 International Whaling Commission outlawed commercial whaling. This trend, however, is by no means assured, since survival at that size relies on precipitous climate conditions. It may be that the oceans of the not-too-distant future will be are swum by substantially smaller creatures. In that this case, it is all the more pressing to go on a local whale-watching tour soon, while the largest animals in the history of the Earth are still at large.