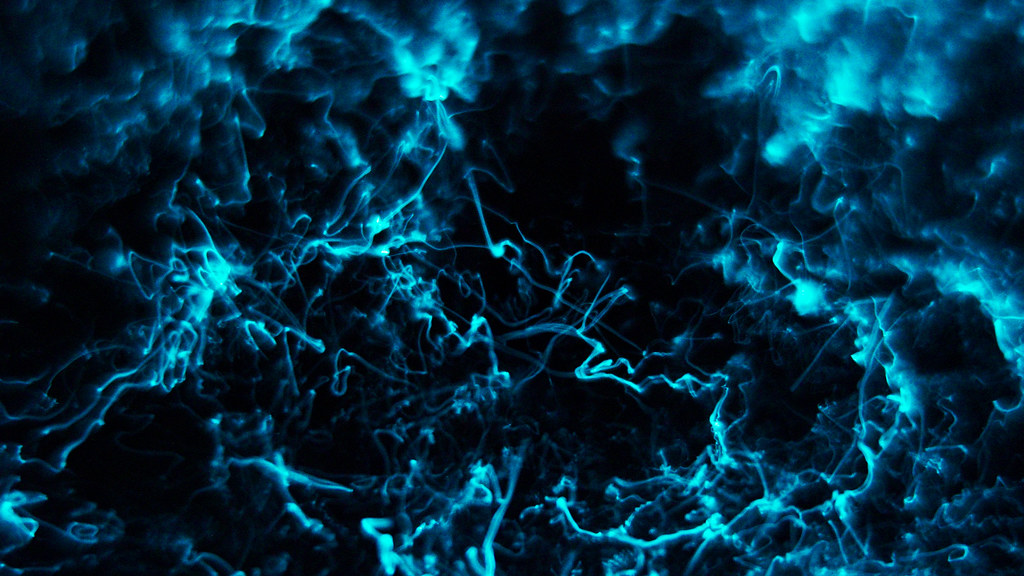 The more we sea, the less we know

Until recently, it was commonly assumed within the scientific community that the deepest parts of the ocean were lifeless voids of darkness, with conditions so harsh that no living organism could survive. In the deep-sea, also known as the abyssal zone, almost zero sunlight passes through, resulting in a pitch-black ambiance and food scarcity. The pressure there is so intense that it can collapse a hollow iron ball onto itself. Typically, biologists do not expect a macroscopic being to successfully withstand those conditions. Yet, as oceanographers have recently discovered, life not only survives in the deep-sea, but it glows as well. Amidst the obscurity, you can catch a light show of evolutionary splendor, thanks to the bioluminescence of both predators and prey of the deep-sea.

Bioluminescence is a characteristic that over eighty percent of deep-sea animals share and is defined by Dr. Matt Davis and his lab members at St. Cloud State University as “the final product of a biochemical reaction whereby energy is converted to light following the breakdown of molecular bonds.” This light emission results in colorful, fluorescent hues that shine across the deep-sea, puzzling scientists with their cryptic origins and biological functions. To this day, little is known about the beings that display bioluminescence in the abyssal zone themselves; what is known is that they have evolved to use bioluminescence to their advantage in this unique environment. There are various ways in which both deep-sea predators and prey use their glow-in-the-dark features to survive, such as luring fish, seeing in the dark, camouflaging, and sending out distress signals. However, to understand the ecological role that bioluminescence plays between deep-sea species, we must first comprehend how something as familiar as light operates.

In the deepest parts of the ocean, light’s wavelength plays a massive role in how a creature’s fluorescence is perceived by nearby creatures, and in some cases, even oneself. Deep-sea bioluminescence is often blue due to the color’s short-wavelength (470 nanometers or nm) which allows creatures to shine brighter. This is because of how creatures perceive color. Light has a variety of color-reflecting wavelengths, and as light penetrates more water, longer wavelengths are less effective in reflecting an object’s color. Thus, a color such as red, which possesses the longest wavelength in the visible spectrum (665 nm), does not carry enough energy to be seen at greater ocean depths. In contrast, blue has a shorter wavelength that penetrates water better, making blue bioluminescence highly visible at depths of over 200 meters. Therefore, blue light is the most common trait that both, predators and prey, possess in the darkest parts of the ocean. However, red, green, and yellow bioluminescence should not be discredited, as they are also found in the deep-sea and can contribute significantly to organisms’ survival.

But now let’s dive into some of the many examples of how bioluminescence operates at greater depths. Perhaps, the best-known bioluminescent deep-sea creature stars in Finding Nemo’s heart-stopping scene where Dory and Marlin are nearly eaten by a long-toothed predator: the anglerfish.

The anglerfish is a deep ocean predator with a lamp-like dorsal limb stemming from its head that boasts blue bioluminescence at its end to lure other fish. The fish in question can range from critters that are baited into becoming the anglerfish’s next meal to other anglerfish that are drawn to the blue, fluorescent light for a night of procreation. The reason these creatures can reproduce to begin with is thanks to a symbiotic relationship with luminescent bacteria—the ultimate wingman. Not much is known about the bacteria that live within anglerfish but according to recent research by Dr. Lydia J. Baker and her team from the division of microbiology at Cornell University, these symbionts are not passed down from parent to offspring. Rather, the low rate of evolution from the bacteria suggests that they are directly acquired from the environment. Shortly after anglerfish are born, both for the benefit of the predator and the bacteria, the symbionts enter from the outside and allow anglerfish to manipulate bioluminescence for both nourishment and reproduction.

The anglerfish is a great example for showcasing how bioluminescence is a powerful resource for predators to hunt and breed, but the applications of bioluminescence run as deep as the ocean itself. The prevalence of blue bioluminescence in the deep-sea does not mean there is not a range of colors shining in the deepest trenches of the world. One such example of a curious use of bioluminescence comes courtesy of the small yet frightful predator called the stoplight loosejaw (or the black dragonfish). This deep-sea creature that can be found at 1,700 to 13,000 feet underwater uses red bioluminescence to perceive color wavelengths that are often lost in the deepest parts of the ocean in a process similar to night vision. They do this by rocking some gorgeous red eyeliner. Unlike anglerfish, black dragonfish have light-producing organs called photophores instead of luminescent symbionts. The photophore that produces red light is found right underneath the loosejaw’s eye, giving this species a huge advantage in the darkness of the ocean. Since most deep-sea fish lack the pigments that allow them to see red fish around them—rather, most of the fish around them—they are restricted to the limits of their own light. However, stoplight loosejaws can perceive this slippery color by producing red bioluminescence. As Dr. Ron H. Douglas from the University of London and the Applied Vision Research Centre states in his research about the species: “The perception of red by stoplight loosejaw is far from perfect, however, it works at a close distance by first emitting red light that is then re-absorbed.” When molecules capture the red fluorescent energy, a sensitizing pigment transfers the energy into visual pigments. This way, the black dragonfish can see the otherwise elusive red prey nearby without being detected by them or bigger predators.

Apart from using bioluminescence, the stoplight loosejaw has another advantageous feature in the form of their black skin. This is because, as Elizabeth Anne Brown explains in her National Geographic article “How Deep-Sea Fish Are So Exceptionally Black,” multiple deep-sea fish like the anglerfish and stoplight loosejaw are either red or black, which are difficult colors to see in the deep-sea. Unless an organism possesses a trait that allows it to see red pigmentation or blue light that reveals a nearby fish, a red or black creature of the deep will likely go unseen. Although these organisms’ near-perfect disguises make studying them a challenge, the creatures themselves have the evolutionary advantage of hiding in plain sight. To clarify, deep-sea critters are not transparent; rather black absorbs all light and red wavelengths do not penetrate water at depths greater than 200m, so red and blackfish can go largely unnoticed.

Although predators have evolved to use bioluminescence favorably, their prey can prove to be hard to catch, since they also light up in order to survive. One of the surprisingly successful ways in which prey can use bioluminescence to protect themselves is with a camouflaging blue glow. Many bioluminescent creatures like squid and hatchet fish glow from their underbellies, like an airport launchpad, to hide from predators! Organisms use blue bioluminescence to camouflage into the blue ocean light, hiding their silhouettes from neighboring carnivores. This trait is called counterillumination and it is common in the deep-sea because “the downwelling light is orders of magnitude brighter than the upwelling light, even an animal with white ventral coloration appears as a black silhouette when viewed from below.” When a fish is above a predator, the light filtering down will give them a black silhouette that predators can easily spot from underneath; thus, they are vulnerable to possible attacks. By using counterillumination, prey can match the color of the light filtering through the water thus making it harder for predators to find them from below.

Another way in which prey can defend themselves against vicious predators is by using bioluminescence as a signal. Atolla jellyfish are one of the most splendid examples of this since they display pulsating light whenever they feel threatened, making scientists wonder: what is this for? In David Attenborough’s documentary Lost World of the Pacific, Attenborough argues that deep-sea anemone and jellies such as the Atolla use their bioluminescence to scare off enemies with disorienting pulses of light. It is also theorized that this signaling light could function as an alarm of sorts. So far, there is not enough data to know exactly why the Atolla jelly lights up this way, but it is fairly agreed upon that their blue bioluminescence is used for protection from predators.

Something more certain would be the use of a bioluminescent “sneeze” by copepods, small crustaceans found in almost any body of water on Earth. This does not mean these crustaceans are sneezing bioluminescence; rather copepods secrete a screen of blue as a defense mechanism against common predators. Despite this advantageous use of bioluminescence, copepods still make up a large part of the deep-sea diet; from larval fishes to filter-feeders, critters of the deep live off copepods. This means that, yes, in their case this ‘sneeze’ is not as fruitful as one might hope, but nonetheless their consumption is for the greater good. As Yasuhiro Takenaka, Atsushi Yamaguchi, and Yasushi Shigeri state in their entry for the Journal of Plankton Research, “[copepod bioluminescence] is then transferred to higher predators through the food chain and might be used for bioluminescence in other luminous organisms.” Thus, the ingestion of copepods is potentially credited as a source for the glow of multiple bioluminescent creatures of the deep, allowing them to survive in the first place.

Copepods simultaneously pass down bioluminescence along the food chain, making the daily bread of the deep-sea go far beyond nutrition; it is a lifeline that most deep-sea species rely on to preserve themselves. Predator-prey dynamics surpass the necessity of simply eating for energy by also supplementing members of the food chain with their abilities to respectively hunt and escape using bioluminescence. Without prey, there would be no predator, which cannot be truer than in the deep-sea as, without bioluminescent prey, such a rich and complex environment would not exist.

The deep-sea is truly an engaging place that, enigmatic as it might be, allows scientists to push biology to new horizons. Even within our own community at UC San Diego, there are labs that explore bioluminescence in these environments, such as the Choy lab (which specializes in deep-sea ecology), Deheyn Lab (which focuses on ocean bioluminescence and color manipulation), and Bartlett Lab (centered around deep-sea microbiology). Yet, despite all the information and data emerging from the deep every day, we still remain largely in the dark about how the ocean operates.

Bioluminescence has served as, quite literally, a light for scientists to discover the mysteries of the deep. However, when it comes to bioluminescence in the abyss: the more we see, the less we know. We can perceive deep-sea predators and prey better thanks to their glowing properties, but this has only prompted more questions. We now know about intricate uses of bioluminescence by deep-sea beings, yet there is much more to see in the sea! With time, I hope that we can discover the mysteries that, regardless of their glow, we cannot currently discern.