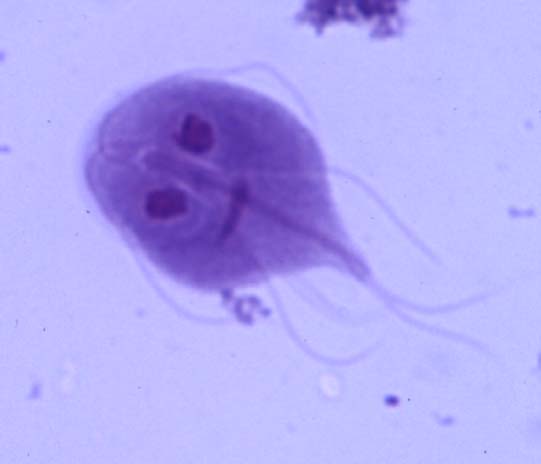 Image: The Giardia parasite in its cyst form swims through its environment, seeking a host (Source).

The Jaws theme song intensifies as you swim through the pool. Panicked, you look around, scanning for any bloodthirsty animals lurking beneath the surface. Thankfully, you discover nothing–that is nothing you can see. While in a swimming pool, you are likely not thinking about what microscopic pathogens might also be going for a swim. But, even in chlorinated pool water, there still may be pathogens swimming right alongside you. Parasites are a type of pathogen often found in swimming pools, and other bodies of water in the United States. A common kind of parasite is Giardia lamblia (also called Giardia duodenalis and Giardia intestintalis) which, according to the CDC, is “the most common intestinal parasitic disease” in the United States, affecting 1 million Americans every year.

This pernicious pathogen is commonly referred to as simply Giardia and is a unicellular protozoan parasite that spreads through contact with fecal matter. Water becomes contaminated when it comes into contact with feces containing Giardia, but Giardia can contaminate anything it touches, including surfaces. The parasite infects when contaminated water is swallowed from swimming pools, lakes, ponds, rivers, or private wells and can be contracted from swallowing 10 or fewer cysts. Once inside its host, it multiplies in the small intestines, feeding on the lining of the small intestines and ultimately leads to giardiasis, a diarrheal disease. This disease causes digestive complications, such as an upset stomach, dehydration, nausea, and poor absorption of key nutrients like B12.

Giardia has two life stages: a trophozoite stage and a cyst stage. In order to infect someone, Giardia must be ingested during its infectious, cyst stage. In the trophozoite stage, Giardia takes on a flattened teardrop shape, allowing it to attach to the mucosa of the small intestines more easily with its sucking disk and during its cyst stage, Giardia is egg-shaped. Upon reaching the small intestines, the ingested cysts undergo excystation, in which two trophozoites break out of a single cyst. These trophozoites multiply more, feeding off of the mucosa of the small intestines. Entering the colon, encystation happens, in which cysts form, which are passed in the excrement, ready to begin the cycle again. The host begins to experience symptoms around 1-2 weeks after infection. These symptoms, which include digestive complications, such as an upset stomach, dehydration, nausea, and possibly poor absorption of key nutrients like B12, last 2-6 weeks. Since giardiasis is not a serious infection, it usually does not require medical attention and clears up on its own.

While Giardia is often not a serious infection, it can cause significant health issues and its relevance is increasing as more storms and floods occur worldwide. If infection becomes serious, Giardia can prevent the absorption of key nutrients, such as B12, fat, vitamin A, and lactose. In a study with patients treated with metronidazole, an antibiotic used to kill bacterial or parasitic infections, persisting Giardia (lasting months) and abdominal pains were reported, as well as inflammation of the duodenum, the beginning of the small bowel.  Studies on children 3 years old and under infected with Giardia revealed that their rate of weight gain was noticeably slower in the second year of life compared to children not infected with the parasite, suggesting that Giardia infections can result in more than just a six-week illness. This is especially concerning, as Giardia could become a more prevalent threat in the coming years, having shown up in floodwaters after storms in recent years. After Hurricane Katrina struck New Orleans in 2005, Giardia was found at high levels in canal water, indicating the water was of very poor quality. This contamination occurred as a result of the storm water mixing with sewage from the city. The presence of Giardia and the other pathogens detected indicates a threat not only for hurricane survivors, but for first responders as well. After the hurricane hit, New Orleans’ water treatment system stopped working completely and was contaminated with sewage and chemicals. As a result, inhabitants were advised to boil their water to kill pathogens, however, this does very little to ensure the safety of the water and many were left without safe water to drink. Additionally, little was done to monitor the water in New Orleans after Hurricane Katrina. Giardiasis is an especially relevant issue, as Hurricane Ida recently hit New Orleans just last month. Hurricanes and other types of tropical storms often lead to the contamination of water supplies and allow for people to contract diseases like Giardiasis as well as other more serious illnesses.

With climate change causing hurricanes to become more frequent, parasites like Giardia and other pathogenic infections may become a more prevalent global issue. While most parasites cause mild infections, they are often hidden to the human eye. One could become infected without realizing it, which speaks to its insidious and devious nature. Just as the shark zeros in on Chrissie at the start of Jaws, parasites’ victims are caught unawares. However, despite their superficial similarities, Giardia, along with most other parasites, will not lead to a fatality…and probably won’t have razor sharp teeth either.