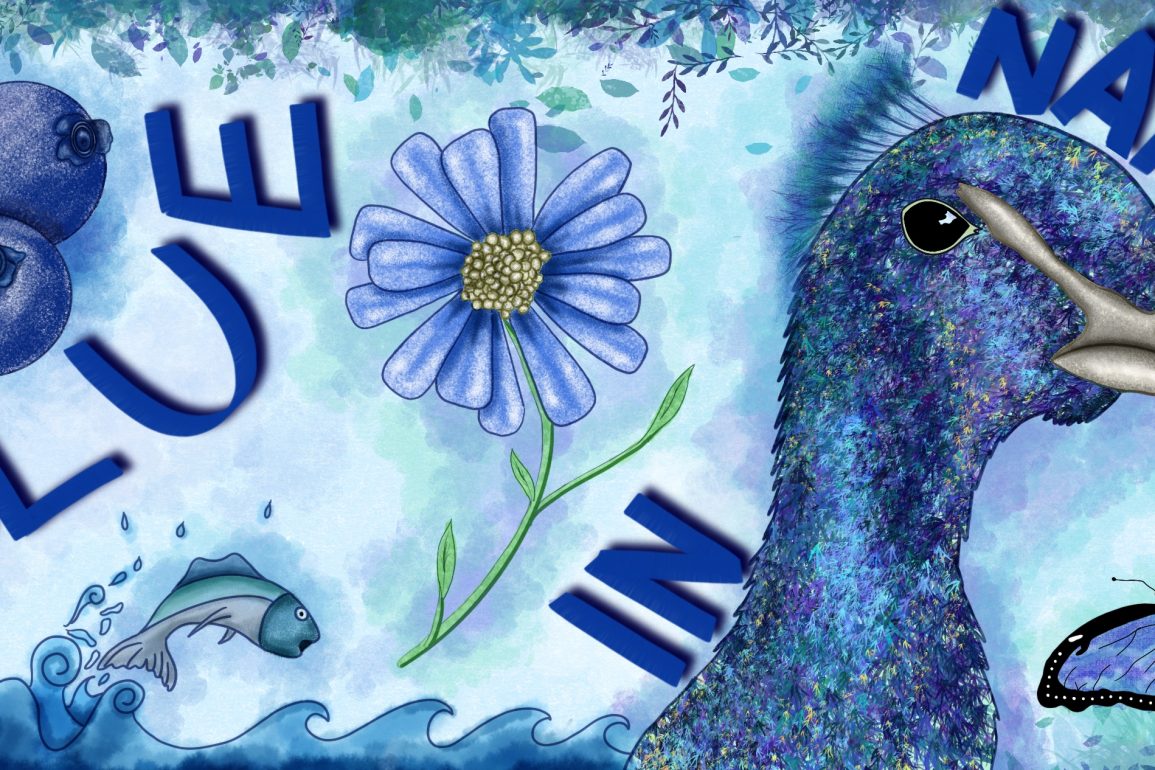 When asked to name some things that are blue, common responses include “the sky” or “the ocean.” On campus at UC San Diego, blue is a bountiful color, from the clear skies and great weather to the Pacific Ocean at our beaches. But despite the seeming abundance of blue in the world around us, blue still remains fairly rare in nature’s plants and animals. Blue pigments in plants are typically unstable due to their chemical properties. On the other hand, blue animals like peacocks and blue morpho butterflies rely on the use of structural color—tiny physical structures on the body that interfere with light to create the optical illusion of the color blue.

Both the absence of blue pigment in animals and their evolutionary decision to turn to structural color can be attributed to the instability of blue pigments in the majority of plants. Within the natural world, pigments found in animals originate from the materials that the animals consume. By using the right mechanism and pathway, animals are able to consume, modify, and eventually incorporate those pigments into their own bodies. For example, the pink color in flamingos is a result of the carotenoid-rich sources of shrimp and algae within their diet, which becomes incorporated into their own feathers. However, animals that consume blue plants do not exhibit this same characteristic, and don’t integrate the blue pigments from their foods into their own physiological colors. Instead, the majority of blue animals source their blue shades from outside their diets by taking advantage of physical structures and interference effects. So why can’t animals source their shades of blue from the plants they consume?

While the chemical properties of the color blue in plants showcase high sensitivity and instability, the color blue in the animal kingdom is much more stable. For example, a fossilized beetle found in Germany, dating back to 50 million years, was able to still retain its bright blue color upon discovery. Unlike plants and their use of pigments, the shades of blue found in animals like that beetle are almost exclusively derived from structural color. In fact, one of the only animals that produces its own blue pigment is the obrina olive-wing butterfly. All other animals make use of many tiny, repeating structures that interfere with visible light to make themselves appear blue to the naked eye. In the blue morpho butterfly, these transparent prism chitin structures are only several hundred nanometers in size, resembling rows of branched trees. The effect of these structures is similar to thin film interference, which is the phenomenon that makes the rainbow-like effect on soap bubbles. In a soap bubble, thin film interference occurs when light reflects partially off the inner and outer surface of the soap film. The reflected light waves from the inner surface interfere with the reflected light from the outer surface. By physically altering the pattern of the light wavelengths to amplify or weaken certain colors, our eyes see the structural color, rather than the actual pigmented color of the structure.

In a blue morpho butterfly, this is what causes their signature iridescent blue. When light waves hit the wings, the prism structures cause the blue wavelengths to interfere constructively when the light reflects. During constructive interference, the peaks and troughs of the multiple light waves line up on top of each other, amplifying the intensity of the color. Meanwhile, the branched structures also cause red wavelengths of light to interfere destructively. This destructive interference occurs when the peaks and troughs of the light waves line up opposite to each other, and the net result is the cancellation of the waves, rendering the red color invisible to our eyes. The result of the thin film interference in a blue morpho butterfly is the perceived vivid, bright, and almost iridescent shade of blue. However, the wings are actually pigmented brown, which is visible upon destroying the structures by crushing the wings into a powder. By destroying the wings, the physical structures that cause the thin film interference are no longer functional, so reflected light remains unaltered. Other animals, like bluebirds, peacocks, and even snakes use similar structures in their scales and feathers to create bright shades of blue.

Despite the rarity of blue, especially blue pigments in nature, humans have historically coveted this color to use in man-made designs. From the deep shades of ultramarine blue made from lapis lazuli used during the Renaissance to the cool tones of synthetic Prussin blue pigment, blue has always been a notoriously expensive and difficult color to recreate. It seems almost ironic that one of our most famous and widely used blue pigments originated from the leaves of the indigo plant, which upon first glance, exhibit an unassuming shade of green. Take a look in your closet, and you will probably see at least one pair of blue jeans. Although most jeans are made using synthetic indigo today, their blue color was historically made using the leaves of the indigo plant. These leaves contain the molecule, indoxyl, the precursor to indigo. By fermenting the leaves in vats of alkaline solution, the indoxyl will react and form a new compound, indigotin, otherwise known as indigo. In order to make indigo water soluble and thus absorbable by the fabric, it is reduced to a form known as leucoindigo by removing the oxygen. At this point in the process, the leucoindigo compound has saturated the fabric, and appears yellow-white while still submerged in the solution. Once the dyed fabric is exposed to the air, leucoindigo is oxidized, creating the signature indigo blue shade. This laborious process results in a stable deep blue pigment from the indigo plant, which is extremely unlike the sensitive anthocyanin pigments discussed previously.

So why does the elusive nature of blue in living organisms matter? Colors found in living organisms are coveted by the pigment industry for their use in art, clothing, and even food. It’s one thing to appreciate the blue of a butterfly, but it’s another thing to recreate that exact shade of blue as a paint or pigment to be used commercially. As a color central to the branding and products of many major companies and organizations, making just the right shade of blue is a task worth billions. Due to the rarity of blue pigments in nature, most companies have turned to synthetic methods to try and create new shades of blue. As the saying goes, “a true blue friend is hard to find”, but finding a true blue pigment just might be harder.