Would Voldemort Have Benefited From Modern Biology?

If you were on certain parts of social media during fall quarter (and by that I mean the Harry Potter side of TikTok), you’ve noticed a sudden resurgence in Harry Potter content. As someone who devoured all seven Harry Potter books and all eight movies back in elementary school, I definitely wasn’t complaining. I think we could all use a little escape from reality, and the Pensieve sounds like a fantastic place to collectively drown our sorrows.

When I first read the Harry Potter books, I wasn’t pursuing a degree in the life sciences nor were the wheels in my brain turning in the same way they do now. So when nine-year-old me read about Voldemort splitting his soul into seven pieces and hiding each piece within an object or creature called a horcrux, I didn’t question it. After all, fictional books are allowed to bend the rules.

While I still agree that anything is fair game within fiction, I’m now a bit more curious about the line between fiction and fact. In a fantasy world where both owls and centaurs roam the woods, where do the rules of biology come into play? Voldemort attempted to achieve immortality through horcruxes, but would he have been more successful at prolonging his lifespan if he took some advice from a biologist?

The quest for immortality is nothing new. Back in the 15th century—when alchemy was all the rage—alchemists claimed that by dropping the legendary Philosopher’s Stone into mercurial water, the ‘Elixir of Life’ would be created and would grant immortality to any and all who were fortunate enough to take a sip. In fact, the quest for the Philosopher’s Stone is a major plot point of the first Harry Potter book. By the 16th century, conquistadors set out in pursuit of the fabled Fountain of Youth, and by the late 19th century, scientists were developing their own methodologies to delay the onset of aging.

Elie Metchnikoff, a Russian immunologist, asserted that phagocytes, a type of immune cell with the ability to engulf and ingest foreign particles, caused bodily degeneration. He advised that a lactic acid-rich diet (foods like yogurt, pickles, and kimchi) would destroy these supposedly decay-inducing microbes. In 1889, C.E. Brown-Sequard, a Mauritian physiologist, had his own approach: he believed that degeneration was a result of the development of reproductive organs over one’s lifetime. His (questionable) evidence was his own body, which he injected with animal sex glands and semen. His theory was so wildly popular that it had people lining up to be injected with this compound dubbed ‘Spermine’. I think I’ll pass. 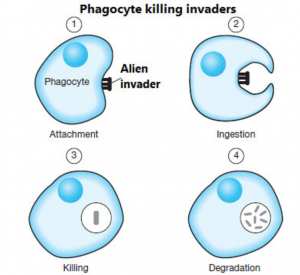 While these theories were revolutionary scientific ideas during their respective time periods, clearly they have not stood the test of time in 2020. I doubt they would have helped Voldemort. So, are modern advancements more beneficial?

Biologically, aging refers to the gradual accumulation of pathological changes in the body over one’s lifetime in mechanisms which usually negatively affect cognitive and motor function, such as those responsible for vision. By studying and understanding these changes, scientists can identify ‘clues’ which might signal the onset of age-related disease and then develop methods of early intervention to prevent and treat these diseases before they worsen.

Within the realm of research on aging, the telomere has been a structure of high interest. Located at the ends of each of our chromosomes, telomeres are repeating nucleotide sequences that play a vital role in protecting our genome from degradation and unnecessary recombination. The cells in our body are constantly dividing, but along with this division, telomere length progressively shortens until eventually cell proliferation jerks to a halt. These non-dividing cells are called senescent cells, and cellular senescence is believed to contribute greatly to organ dysfunction in age-related diseases. 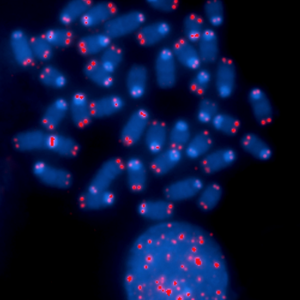 The telomeres, shown here in red, play an important role in protecting the genome. (Source)

A study published in The Journal of Cell Biology in August 2020 focused on the role of telomere shortening in idiopathic pulmonary fibrosis, or IPF, an age-related disease which most commonly appears in humans around age 60 or 70. Along with mutations in telomere-protective proteins, mutations in telomerase (the protein responsible for adding the species-specific DNA repeat sequence to the end of a telomere) are associated with 8% to 15% of IPF cases. By studying both wild-type and telomerase-deficient mice, researchers sought to discover whether AAV9-Tert, the gene which encodes for telomerase, could potentially lengthen telomeres when introduced to the lung cells of mice with IPF.

Both wild-type and telomerase-deficient mice exhibited decreased DNA damage after receiving the telomerase treatment, as well as an increase in median and maximum life span. The effect of AAV9-Tert gene therapy on cellular senescence was also measured by tracking a marker gene called p16, which is expressed by most senescent cells. Mice treated with AAV9-Tert showed a lower level of cellular senescence compared to those treated without, and AAV9-Tert therapy did not increase likelihood of cancer or early onset cancer in the wild-type and telomerase-deficient mice. Though telomerase gene therapy still requires a great deal of additional testing before we can begin to consider testing on humans, the relationship between telomere shortening, cellular senescence, and aging is a promising one. Also, Voldemort wasn’t technically human, was he?

Another major aspect of aging research involves neurodegenerative diseases such as Alzheimer’s and Parkinson’s, which are heavily associated with old age yet do not have any known cure. Neurodegenerative disease is caused by the degeneration of brain cells, or neurons, which can lead to a loss in motor and/or cognitive function. Interestingly, for many years scientists believed that neurogenesis (the formation of new neurons) did not occur in the adult mammalian brain. However, during the early 21st century, it was shown that neural stem cells (NSCs) exist in small concentrations in the adult rodent brain. Newly divided cells have also been shown to travel through the rodent brain and differentiate into interneurons, cells which act as messengers to transmit signals between sensory or motor neurons. They play an integral role in the neural circuitry which allows us to move through and perceive the world around us.

Understanding adult neurogenesis and neuroplasticity, or the ability of the brain to physically change throughout one’s lifetime, is essential to developing treatments and therapies to age-related disease. While we know a great deal about neurogenesis in the rodent brain, little is understood in relation to humans. A paper published in Neuron in 2012 suggests that the development of more reliable markers (methods of measuring NSCs) in postmortem human brain tissue, or even the development of more advanced MRI imaging methods, will be crucial in understanding more about human neurogenesis.

Despite the hurdles we’ve yet to overcome in regards to neural proliferation, neurodegenerative disease research continues to be promising. As UC San Diego students, we have a plethora of labs right here on campus that focus on this very aspect of aging. For instance, the Ackerman Lab identifies mutations which contribute to degeneration of the nervous system. One such mutation focuses on translation, or the process of creating a protein using a template strand of messenger RNA. This cellular role is often allotted to the ribosome. It turns out that the speed at which translation occurs is essential to proper protein function, and ribosomal stalling during translation is associated with neurodegeneration and neuron death. Regarding a gene known as GTPBP2, which most likely works to ‘rescue’ stalled ribosomes during translation, evidence has recently been discovered which supports the idea that a mutated GTPBP2 may be responsible for degeneration in the human cerebellum (a small structure in the back of the brain with an important role in motor learning). The more we learn about the aging brain, the closer we get to discovering the necessary tools and methods for treating age-related disease. 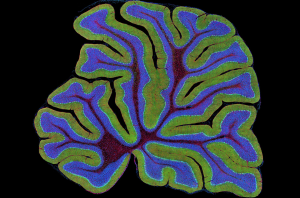 A cross-section of the mouse cerebellum, an important structure for locomotion. (Source)

Over the past couple centuries, aging research has shifted away from a quest for eternal youth. It instead seeks to alleviate the suffering of millions of lives worldwide who are combating age-related diseases and disorders. So given Voldemort’s relatively healthy physique, would Voldemort have benefited from modern science, or should he stick to alchemist methods? After everything you’ve just learned, I’ll leave it up to you.

By the way, anyone interested in setting up a UC San Diego research lab to study the effects of dark magic on the body should inquire within.