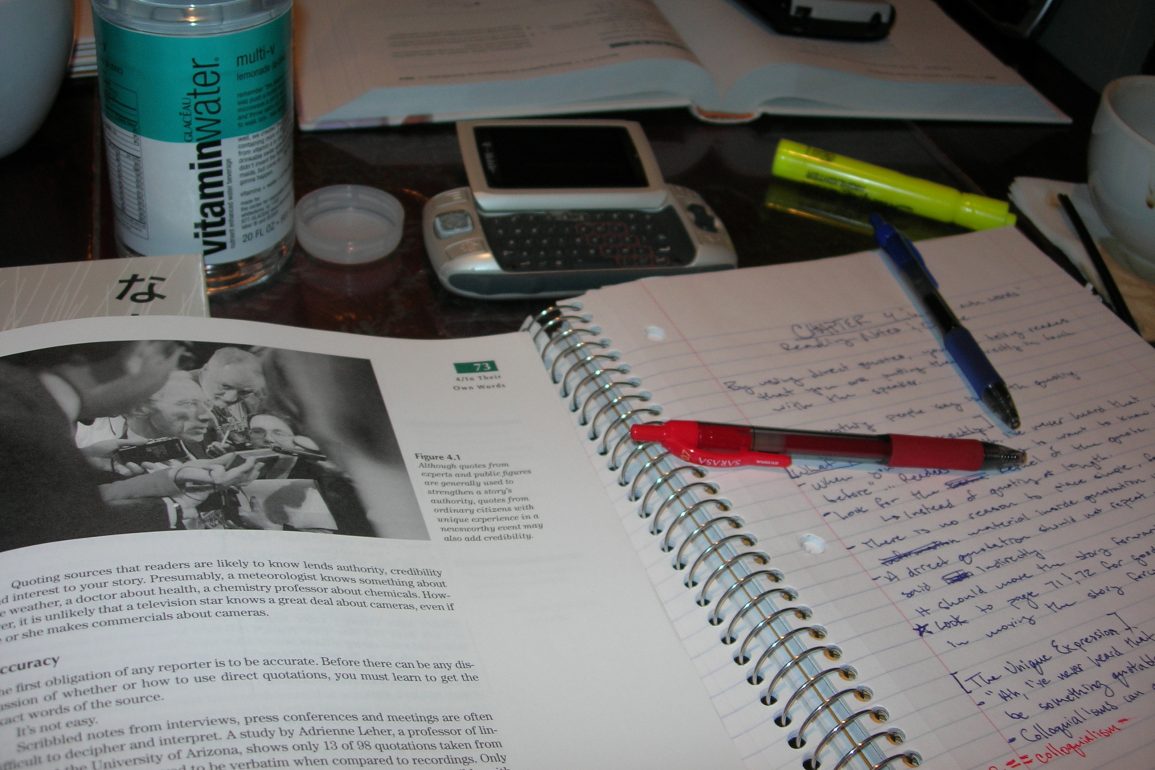 Your room is dim, lit only by the bright light of your laptop and the soft pearly glow of the moonlight spilling through your window. On any other night, this setup might be relaxing, but tonight you feel anything but relaxed; you have a chemistry final in a mere 12 hours, and you have just started studying. You drag yourself through the night, passively reading through lecture after lecture and trying to commit all of the material to memory. Glancing at your clock, you realize that practice problems are simply out of the question; you barely have time to cover all of the information once. Fast forward several hours, and you find yourself sitting in a large lecture hall surrounded by hundreds of other students who look too exhausted to be nervous. During the exam, you feel as though you’ve barely got all of the pieces of the material together. After handing in your test, you silently vow to yourself that you’ll start studying earlier for the “next one.”

Once again you find yourself in your dim bedroom, which is lit only by the bright light of your laptop and the soft pearly glow of the moonlight spilling through your window. On any other night, this setup might be relaxing, but tonight you feel anything but relaxed; you have an English paper due in a mere 12 hours and you have just started reading….

The Struggle of Learning and Testing….Is There A Better Way?

This universal, unceasing, and exhausting cycle is largely caused by the inefficiencies of passive learning. Passive learning encompasses a wide variety of techniques that for many students is what studying is: reading a textbook, rewatching a professor’s lecture, and rereading notes taken during class. Passive learning is not very interactive, as the transmission of information is strictly one-way—from teacher to student. This kind of teaching is commonly seen in educational institutions around the world and is especially prevalent in public universities such as UC San Diego. Across campus large lecture halls are crammed with nearly half a thousand students, all of whom are hunched over their notebooks copying notes furiously—yet absentmindedly—from a large screen displaying a professor’s PowerPoint packed with bullet points and diagrams.

A key component of the learning process that passive learning lacks is interaction with the material. When a student takes notes during lecture, they are not necessarily interacting with the material, but rather, simply copying information down. This lack of interaction also presents itself when students attempt to review notes or read through the solutions manual in preparation for an exam. Passive learning strategies are not only largely ineffective, but they are also often arduous and time-consuming. It’s exhausting to rewatch hours worth of lectures and take notes on each slide. Because passive learning strategies are so painstaking, students often spend a copious amount of time studying for exams. In the end, students fall into a situation like that described above: they run out of time and are unable to properly study all the material needed for the exam. When students find themselves in this situation, many comfort themselves by positively correlating the amount of time spent studying for a test with the grade they expect to receive on the exam. In other words, the more hours I spend sitting at my desk studying for an exam, the better I should do on the exam…right?

Mark McDaniel, Daniel Howard, and Gilles Einstein disagree. In early 2009, these three researchers conducted two experiments with a group of college students to compare the effectiveness of the “3R,” or “read-recite-review,” strategy against the standard passive learning strategies of rereading and note-taking. Initially developed in 1946 as the “SQ3R” method by American education philosopher, Francis P. Robinson, the “3R” method is an active learning strategy that consists of three simple steps: read, recite, and review. The 3R method consists of reading a text, reciting the information you’ve gathered from it, and then reviewing the text again to fill in the gaps in your understanding. In their study, McDaniel et al. compared college students’ efficacy in recalling information when using the 3R method versus when students used passive learning strategies to study the text. One group of students reread the text and took notes, while another group used the 3R method to actively engage with the information as they were learning it. The researchers tested the students both immediately after the initial study session and one week afterwards, using both multiple choice and free response questions. In both scenarios, the students who used the 3R method had better results. Additionally, they studied for a shorter period of time!

It sounds too good to be true. However, multiple studies have shown that solely rereading the textbook or taking notes does not help one retain information for long periods of time, which might be why students forget how to balance a reaction two minutes after turning in their chemistry exam, or forget the author of the book they were writing their paper on seconds after pressing submit (let’s be honest—maybe even before hitting submit). Druckman and Bjork, two researchers from Washington D.C., demonstrated in their 1994 study that the feeling of remembering does not directly correlate to actually being able to retrieve the “remembered information.” This common misconception is widely held by students, who get a false notion of understanding a topic just from rereading their textbook. In reality, much of the information the students read was not absorbed at all; if it was, it wasn’t absorbed for long. If passive learning has shown to be ineffective a majority of the time, what learning methods are effective for students?

Active recall has also been shown to be helpful in the other popular stomping grounds for students: parties. Alongside four other researchers, Peter Morris, a researcher at Lancaster University in the United Kingdom, published a paper in 2005 which examined the efficacy of different name-learning strategies for remembering names at parties. In his experiment, Morris had participants study a list of names. Morris had some of the participants actively try to recall the names while they were studying, while the rest of the participants simply studied the list of names repeatedly. After a short interval, Morris tested the participants on the names and found that the participants who retrieved names during their study period were able to recall 250% more than those who restudied. In the real-life segment of this experiment, Morris tested partygoers’ ability to retain names after either studying the names with active recall or just going through the list. Morris found that partygoers who used active recall were able to remember 11 names, while those who did not use an active learning method could only remember five. After seeing that active recall helps students and party animals alike, we have to ask ourselves: what makes active recall produce such positive results?

The (Neuro) Pathway to Success

As it turns out, active recall utilizes the testing effect, a psychological technique which describes how the long-term memory is improved when a part of the learning period devoted to internalizing information is utilized for information retrieval. In other words, you are able to remember information for a much longer time because you spent more time practicing remembering (retrieving) that information. Jeffrey Karpicke asserts this point in a 2012 article published to the Association for Psychological Sciences, “Retrieval-Based Learning: Active Retrieval Promotes Meaningful Learning.” In this article, Karpicke discusses the diagnostic value of retrieval cues, which describes how well certain cues help people remember a specific piece of information and disregard other information. Karpicke asserts that retrieval, a key component of the active recall method, may help enhance learning because it strengthens the connection between the cue and the target information. Practicing retrieving a certain piece of information may also facilitate learning by reducing the expanse of the possible “answers” or other pieces of information linked to that cue.

In its elemental form, implementing active recall into your daily studying regime is simple: read a section of text without taking notes, close your book or laptop, recite what you’ve remembered from your reading, and then read your text again to fill in what you missed. This studying method is simple, and its benefits are plentiful; however, many students do not implement it into their studying. A 2009 study by Karpicke, Butler, and Roediger asked 177 undergraduates at Washington University in St. Louis which study techniques they used. The researchers found that only 19 of the students used active recall when studying, coming to a mere 11%. If active recall is so straightforward to implement and produces such positive results, then why do such few students incorporate it into their studying?