Nearly 75% of the American population relies on some form of visual aid. According to The Vision Council, approximately 64% of people wear eyeglasses, while 11% rely on contact lenses. For most of us, these statistics are no surprise⁠—visual aids have been a prevalent part of our society for centuries. Many of us acquired our first pair of glasses or contacts at a young age, developing optical reliance early on.

But what really are these instruments, and why do so many of us need them? How do our lenses transform the way we see the world? Before delving into such questions, it is helpful to understand the physiology of sight. 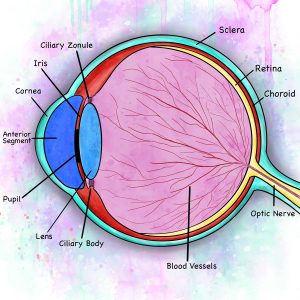 Anatomy of the human eye

When light enters the cornea, the clear outermost layer of the eye, it is bent towards the pupil, the opening of the eye. The pupil constricts and dilates in accordance with the environment through a process called pupillary light reflex: in dim settings, the pupil expands for better visual detection, while in brighter settings, it constricts to moderate light exposure. The transmitted light then passes through the lens and is bent once more before extending to the retina. This double-bending mechanism flips all visual input; however, the brain reverts it right-side up before cognitive perception occurs. To reach the brain, visual images are coded into electrical impulses that travel along the optic nerve, eventually making their way to the occipital lobe of the cerebral cortex.

Normally, light that enters the lens is fixated on a precise location in the retina known as the focal point. The quality of this fixation is dependent on the distance between the lens to the retina. When this distance deviates from the ideal length, the focal point forms either in front of or behind the retina rather than on the retina itself. The result is an imprecise scattering of light termed refractive error. Refractive errors disturb the clarity of sight by diminishing how visual input is focused and eventually interpreted. Because the shape and size of the human eye continue to change throughout development and adulthood, visual complications can occur at nearly any point in life.

The most prevalent refractive condition is myopia, commonly referred to as nearsightedness. In myopia, the axial length (distance between the lens and retina) is abnormally elongated such that the focal point occurs before the retina. This condition, resulting in a decreased ability to see distant objects clearly, affects an estimated 25% of Americans. 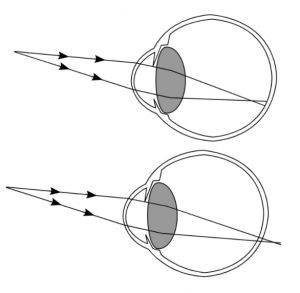 Myopia (top) and hyperopia (bottom), illustrating their respective focal point errors forming before and beyond the retina.

Alarmingly, the frequency of nearsightedness has doubled in the United States since 1971. In East Asian countries such as China, Taiwan and Japan, the prevalence of myopia in young adults approximates 70-90%. This finding indicates that environmental influence on vision is more prominent than previously believed, as children in these countries are reported to spend more time indoors and away from sunlight. In fact, one Taiwanese study found that light intervention significantly decreased myopic shift and axial elongation in schoolchildren who spent at least 11 hours a week outdoors for a one year duration. Another study found that students who played outdoor sports showed the least potential for myopic development.

The theorized mechanism for this effect is that dopamine secretion in the retina, which is induced by light, inversely correlates to axial elongation. Though the concise role of dopamine in this process is still uncertain, one explanation states that retinal dopamine agonists, which are substances that initiate a physiological response once bound to receptors, “interact with the early signaling molecule ZENK.” The result is an initiation of postnatal eye growth.

The severity of myopia in patients can be graded as mild, moderate, or high, depending on the extent of optical power needed for correction. Whereas mild myopia is most common and easily managed, high myopia is associated with more serious conditions, including retinal damage, glaucoma, and cataracts. Glaucoma, which results in damage to the optic nerve, and cataracts, which disturb visual clarity due to protein accumulation in the lens, are progressive pathologies. In severe cases, they can result in complete vision loss.

In contrast to myopia, hyperopia (also known as farsightedness) is marked by a shortened axial length, resulting in the focal point forming beyond the retina. Consequently, farsighted individuals are able to see distant objects clearly but report blurred vision at closer distances. Hyperopia is present in 10% of individuals in the United States and, like myopia, is diagnosed through a refractive assessment. Hyperopia also shows an association with the environment: a 2008 study conducted in Poland discovered that hyperopia presents at a lower frequency among schoolchildren raised in the city compared to those living in the countryside. This ailment has also shown to worsen with age due to a gradual increase in the rigidity of the lens over time. When farsightedness emerges in later adulthood, it is defined as presbyopia.

Hyperopia can be clinically diagnosed in several ways, including as simple or pathological. Simple hyperopia corresponds to the refractive error caused by axial shortening, while pathological hyperopia is attributed to “[prenatal, neurological, or inflammatory] maldevelopment, ocular disease, or trauma.”

Though most refractive errors are congenital, meaning present at birth, they can worsen throughout development. A primary reason for this progression is that ocular tissue continues to grow before and during adulthood. Consequently, the progression of myopia is often inevitable. In contrast, the shortened axial length seen in hyperopia may be naturally corrected over time due to this growth⁠—a process termed accommodation. 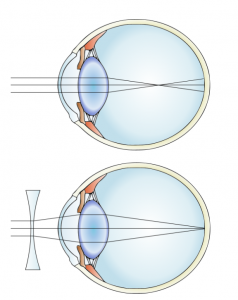 The optical treatment for myopia (top) as illustrated by the placement of a minus lens, altering light refraction at the cornea.

Because the causes of myopia and hyperopia are related to the refraction of light, their treatment directly involves the modification of such refraction. The treatment for all forms of optical error involves refractive modification through corrective lenses such as eyeglasses and contact lenses. More specifically, myopia is corrected by the diversion of light through a minus lens, which consists of a thick base and thin center. This structure promotes the focus of light at the retina. In contrast, hyperopia is corrected through a plus powered lens, which is composed of  a thicker center that shifts the focal point forward. Though the use of glasses and contacts are increasingly prevalent, the development of such optics date back to as far as the 13th century.

The first pair of spectacles is believed to have emerged in Pisa, Italy, though the conceptualization of optical aids existed much earlier. During the Middle Ages, for instance, scholars looked through glasses filled with water as a means of magnifying scripture. Eventually, single-lens frames composed of glass were hand-held to enhance near-sighted reading. By the late 1200s, magnifying lenses were doubled and connected along the nose bridge by various materials—think leather, wood, metal, or even animal bones—paving the way to the modern eyeglass. 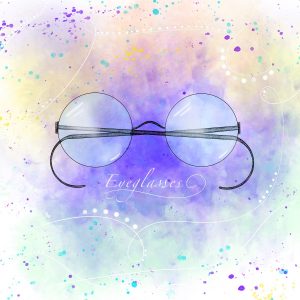 A silver lined frame crafted by Carl Fredrik Jonssén in 1850. (Depiction of Source)

Centuries later, contact lenses made their appearance through a series of flawed, yet increasingly efficient, introductions. In 1801, a young English scientist by the name of Thomas Young was inspired by Renee Descartes’ innovative notion that optical aids could be worn in direct contact with the lens of the eye. Young designed a thin glass tube containing water (for magnifying purposes) and applied the tube to his eyes using a wax adhesive. In retrospect, this was both dangerous and inefficient; at the time, however, Young paved the way for centuries of contact lens development.

Today, many advancements in contact lenses have allowed for increased comfort and safety. Most lenses provide moisture for longer wear-time following the emergence of hydrogel plastics. In addition, they can be worn either during the day or overnight, with the latter providing temporary day-time correction (known as “corneal reshaping contact lenses”).

In addition to the advancements in both eyeglasses and contact lenses, newer and more permanent technologies have emerged within the last several decades. Refractive eye surgery, also known as LASIK (laser-assisted in situ keratomileusis) involves the use of a pulsating laser beam for precise reshaping of the cornea. The process is relatively brief and begins with the incision of a thin flap of the cornea to expose underlying tissue curvature, followed by numbing eye drops and ocular tissue removal. In cases of myopia, the cornea is shaped in a concave manner to promote a long-lasting reduction in refractive power. With hyperopia, tissue is flattened along a spherical circumference to produce a sharper convex shape. With high rates of success and a low probability for complications, LASIK is best suited for individuals with mild to moderate myopia or hyperopia. It can also treat astigmatism, which is an impairment in vision characterized by imperfect curvature of the cornea. Surgical treatment is not suitable for severe myopia, as it would require too large a fraction of tissue removal.

Despite the increasing global prevalence of refractive errors, many misconceptions continue to surround what does or does not worsen eyesight. While natural light exposure does play a role in the progression of myopia and hyperopia, most lifestyle patterns do not. Squinting, for example, may be indicative of myopia but does not affect its progression. Similarly, while extended screen time may cause temporary eye discomfort (termed “digital eye strain”), studies show a limited impact of blue light on long-term visual impairment.

Another common misconception is that individuals who wear corrective lenses develop a physiological reliance on them or weaken their eyes through their usage. While refractive errors can worsen over time, the changes in our prescriptions are not a result of the optical aids we wear.

Finally, a prevailing household misconception is that carrots are beneficial to vision; many of us can likely recall being given cups of carrot juice to “strengthen our eyes.” While high in Vitamin A, carrot juice provides minimal, if any, impact on refractive errors. Nonetheless, the idea that vegetables can improve eye health has, in fact, been supported empirically. Leafy greens containing lutein and zeaxanthin carotenoid pigments have shown to prevent eye diseases such as age-related macular degeneration, which results in damage to the retina. Such pigments reduce the amount of light-induced oxidation in the retina, a process associated with harmful, high-energy blue light.

With the frequency of vision ailments on the rise, it is critical that we understand the causes and management of refractive errors. Though our ability to alter our visual predispositions is limited, there are measures we can take to protect our eyes. The best form of self-care includes regularly visiting an optometrist, spending time outdoors, and maintaining a balanced diet.

“Schematic diagram of the human eye en.svg“ by Rhcastilhos. And Jmarchn. is licensed under CC BY-SA 3.0

“Myopia and lens correction.svg“ by Gumenyuk I.S. is licensed under CC BY-SA 4.0

“Myopia and Hypertropia.svg“ by Gmeyer is licensed under CC SA 1.0