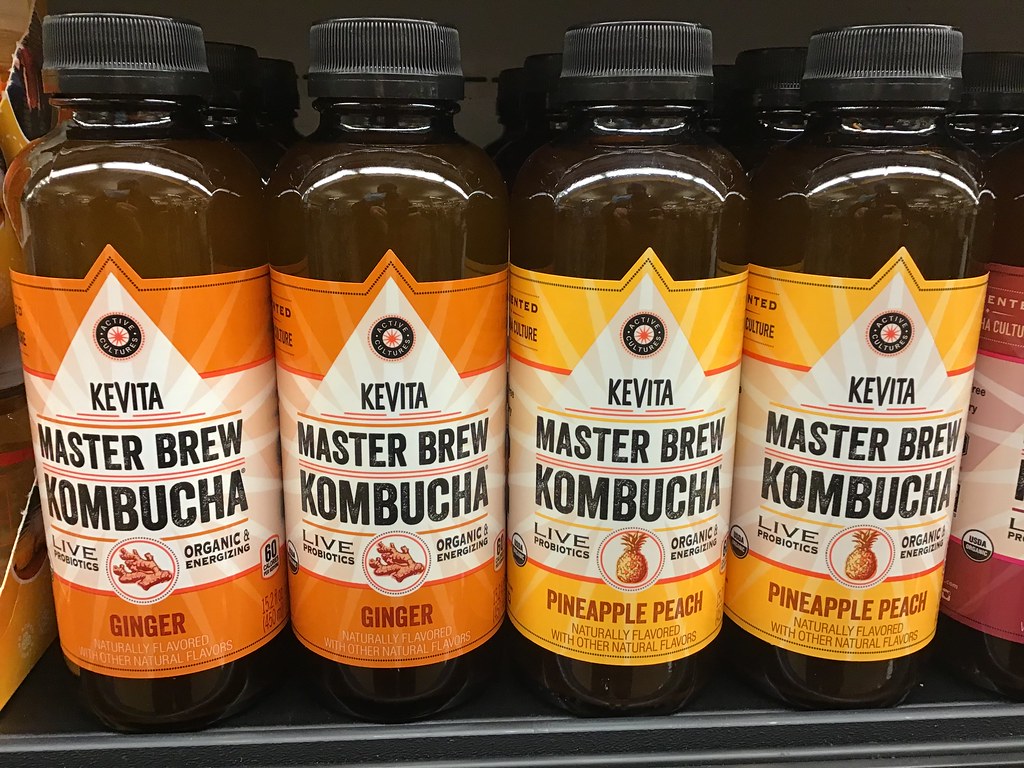 Today is officially day 42 of quarantine (although I’ve lost all sense of time and space, so this count could be wildly inaccurate). I’m back in my high school bedroom. I’m sharing a bathroom with my sister again. My daily steps have dropped from 12,000 to 500 a day. I have an uncomfortable amount of time on my hands.

Ever since California governor Gavin Newsom issued the state-wide shelter-in-place order, I’ve done what any other sane person in quarantine does: I’ve baked a total of five loaves of banana bread, picked up knitting, and tried, quit and tried again at the Chloe Ting workout challenges.

But a beast of an activity that I have yet to tackle is making my own kombucha.

If you aren’t familiar with kombucha, it’s a fermented tea drink made with bacteria and yeast—and yes, it is nothing short of incredibly delicious. Indeed, I have been gulping down bacteria by the gallons because of its several health benefits; kombucha has been reported to boost your immune system, improve digestion, and normalize your gut processes (1). You can thank the yummy bacteria for that one as the bacteria in kombucha are considered to be antimicrobial and probiotic. This is similar to the healthy bacteria in yogurt, which help promote healthy bacteria activity in the gut and fight off other harmful bacteria.

So how do we go about making our own kombucha? And why bacteria?

Well, kombucha is made possible through fermentation, which is a metabolic process in which microorganisms—in this case, yeast and bacteria—convert sugar into an alcohol or acid. Though the sound of bacteria in your food sounds less than appealing, the fermentation process actually introduces important and healthy microorganisms into your gut microbiome. Some of humanity’s greatest foods, in fact, are made through fermentation, such as kimchi, beer, sourdough bread, cheese, and yogurt (but I personally wouldn’t advise eating these foods in a meal together).

At a microscopic level, the bacteria and yeast, two unthinkable comrades, work together in a tag-team operation to convert tea into kombucha. Through a metabolic pathway called ‘glycolysis’, yeast will break down sucrose, or common sugar, into glucose and fructose, from which the glucose produces ethanol. Meanwhile, the bacteria will use the newly-produced glucose to make gluconic acid and the ethanol to make acetic acid (the stuff that makes kombucha taste slightly vinegary.)

I knew this was an endeavor that I simply had to get behind (I am a sucker for all things homemade and all things tasty.) To make my kombucha, I began by steeping eight black tea bags and adding one cup of sugar, which is essential for the yeast and bacteria to feast on. I also needed the yeast and bacteria themselves (otherwise known as SCOBY, short for Symbiotic Culture of Bacteria and Yeast). This I very easily purchased on Amazon. Man, the powers of the internet continue to surprise me each and every day.

After letting the sugary tea cool down to around 70-80 degrees Fahrenheit, I poured the tea, the SCOBY, and a cup of already-fermented kombucha at a low pH into a glass gallon jar, which I then covered with a coffee filter. These last steps ensured that any undesirable microorganisms would not grow in the jar and made sure that insects and fruit flies didn’t get into my kombucha before I could (2).

As a total kombucha newbie, I was nervous at first, afraid of what kombucha Frankenstein I might accidentally create overnight. As the good people of r/kombucha advised me, making kombucha is a delicate game of strategy. The element of time will make or break your product. Scientific studies have actually proven the most effective time frame to ferment your kombucha tea: around 15 days (3). Because the yeast and bacteria produce carbonic acid during fermentation, the tea will become tangier and more carbonated the longer you let your tea ferment.

However, the amount of time it takes for your tea to ferment also depends on the temperature of the room. Fermentation optimally occurs between 70 to 80 degrees Fahrenheit, when bacterial growth and metabolic activity are at their peak. Anything colder than that might cause your tea to sit there for months, fermenting more slowly than it takes me to write an SQ blog article (3).

So I let the tea sit and ferment on its own for a couple of days, occasionally checking up and saying a quick hello to my kombucha baby during my trips to the kitchen. On day three of fermentation, I was delighted to see that I was met with not one, but TWO scobies! The original SCOBY (termed “mother” SCOBY) had sunk to the bottom, only to reveal a beautiful baby “daughter” SCOBY (yes, these are real terms) that floated on top. This process happens because the original yeast and bacteria form a thin layer of cellulose that houses the newly grown bacteria as the sugar is consumed inside the jar (3). I felt like a proud mother that day.

After day 7 of fermentation, I began to taste test the kombucha. What a shock to discover that the tea had actually become tangy, tart, and simply effervescent—everything you’d ever want in a kombucha! The next step was to bottle the kombucha with all sorts of fun and wild flavor combinations (pretty much the ‘mad’ part of ‘mad scientist’).

Once considered a daunting culinary task best left to the experts, fermenting kombucha tea at home had surprisingly turned out to be a wild success! Thanks to the temperature and timing considerations, the kombucha turned out tangy, tasty, and bubbly. Oh, and one last thing. Making homemade kombucha essentially leaves you with gallons upon gallons upon gallons of kombucha. Each batch of kombucha creates a brand new ready-to-use SCOBY, so you literally can’t stop making it. That being said, if you’d like a free bottle of homemade kombucha, drop your addies in the comments. I have strawberry and mango flavors!