Skin Regeneration in Wound Healing: The Art of Self Preservation

Picture this: you’re a new parent, eager to keep your child safe at all costs and untrusting of a suddenly threatening world. You’ve read through every parenting guide and taken every precaution to avoid harmful toxins and maintain the highest standard of cleanliness. You feel prepared, but let’s face it, you can’t control every environment your toddler is in.

Now, picture this: you take your toddler to the park. You turn your head to greet another parent, and before you know it, you hear an eruption of sobbing. Your toddler is face down on the ground and bleeding. You gasp, pick up your child, and instinctively rush to the hospital for a set of stitches. But don’t worry—despite the bleeding, the doctor will likely reassure you that the cut is superficial and will heal itself. You leave with a few bandaids, antibacterial ointment, and some much needed peace of mind. On the drive home, you ponder how your oblivious toddler could possibly heal their own wounds.

As with all variations of evolution, the experience of self-healing is universal and takes many forms. We often recover from superficial injuries like paper cuts and minor falls without a thought. We develop immunity to pathogens that could otherwise result in organ damage, sepsis, or death. We find ways to cope with the damaging mental repercussions of trauma. Whether skin-deep or psychological, human beings—like all existing species—encounter barriers that threaten our survival. How we have evolved to overcome these barriers is explained by the art of self-preservation.

Understanding skin regeneration in wound healing requires foundational knowledge of the skin’s physiology. The skin embodies the integumentary system, which functions to protect our organs and extremities. Through its many layers, it serves as a physical barrier against environmental pollutants, helps retain bodily fluids, and provides a form of regulating the body’s temperature.

Human skin consists of two primary layers: the outer epidermis and inner dermis. The epidermis is composed of several epithelial (or thin) layers, namely stratum basale, stratum spinosum, stratum granulosum, and stratum corneum. Areas of the body that are thicker in texture, such as the palms of hands or soles of feet, contain a fifth epithelial layer known as stratum lucidum. Each of these layers houses unique groups of cells which preserve and protect the skin.

Through the presence of specialized proteins and cells (namely keratin, melanocytes and macrophages) the epidermis dynamically functions as a hydrating barrier and protector of underlying organ systems. Of equal importance is the underlying dermis; this composition of blood capillaries, lymph vessels, sweat glands and nerve endings is considered the heart of the integumentary system. The dermis provides structural support to the skin and is responsible for the production of sweat and sebum. Additionally, it supplies blood to the epidermis, providing essential nutrients for growth and recovery.

The physiology of the skin largely functions to preserve itself and promote regeneration, both long-term and in response to acute injury. Upon injury, skin healing occurs in a series of five major steps: coagulation, inflammation, epithelization, fibroplasia, and maturation. Each step plays a role in preventing blood loss and infection, regenerating epidermal and dermal layers, strengthening those layers, and, finally, restoring the localized properties of the skin.

When injury occurs to the skin, it damages the epidermis and dermis as well as the interstitial (connective) space between them. In damaged tissue, this bridging mechanism is compromised, and the surrounding skin presents a physical separation (seen as a cut). In response, blood plasma forms clots containing platelets and protein fibrins at the site of injury. This process of coagulation serves to prevent further blood loss and marks the first step of wound healing. 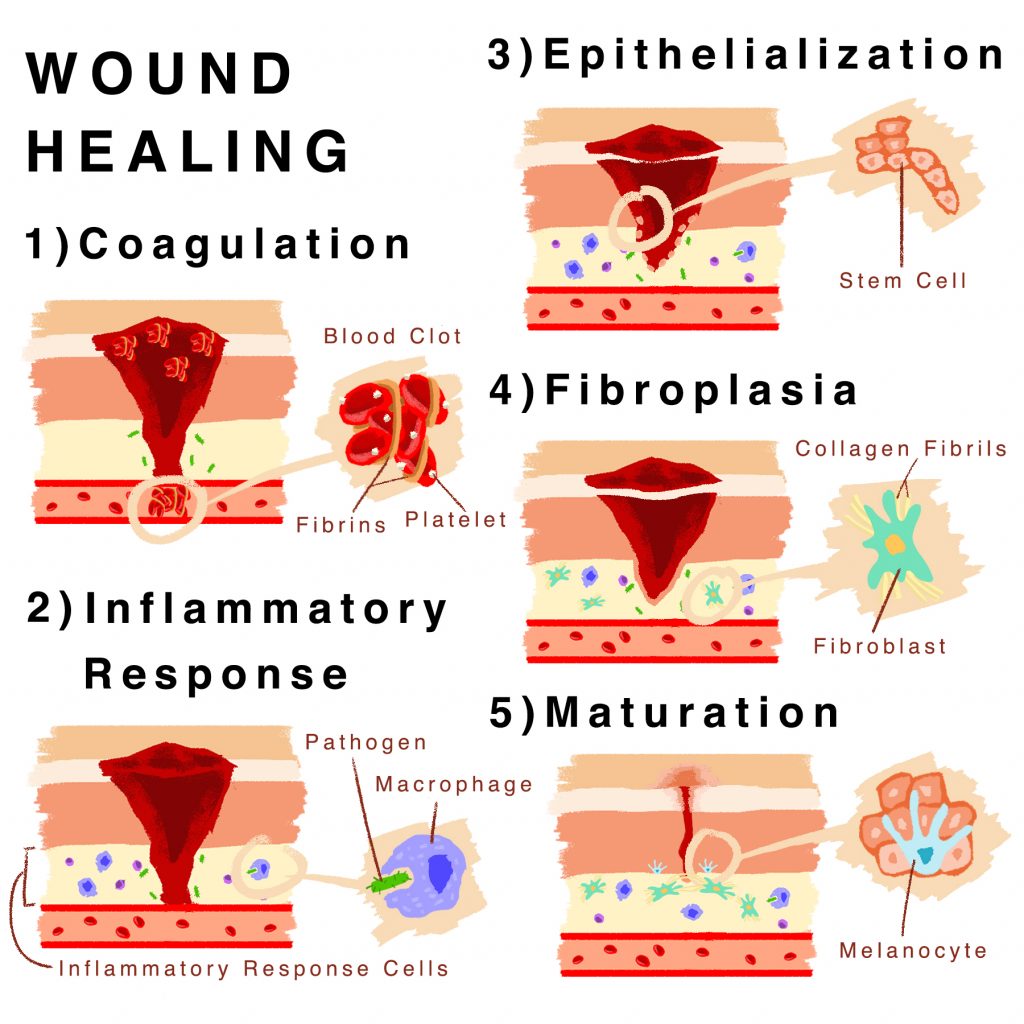 The five primary stages of wound healing and their corresponding cell types.

The next step involves an inflammatory response. The abraded layers of skin initiate the release of small proteins such as cytokines and chemokines, which attract immune cells. At this point, vasodilation also occurs. The recruitment of inflammatory response cells such as macrophages and neutrophils is more efficient as a result of blood vessel expansion caused by such dilation. As mentioned previously, macrophages engulf potential pathogens and “eat away at” damaged skin tissue. Neutrophils actively kill foreign intruders and act alongside macrophages in digesting them. After an inflammatory response, remnant immune cells sourced in blood clots engage in the formation of scar tissue.

The following step of wound healing is called epithelialization. This process pertains to the influx of basal stem cells, which are undifferentiated somatic cells that divide into specialized daughter cells through a process known as hyperplasia. Basal cells compensate for the loss of damaged and engulfed cells at the point of injury. While the epidermal layer regenerates rather quickly, the dermal layer beneath it requires more time to redevelop.

The fourth step of wound healing and skin regeneration is known as fibroplasia, which relates to the strengthening of the relatively new epidermal layer. This strengthening is the result of collagen production by fibroblast proteins in the surrounding tissue. The collection of collagen promotes structural integrity and durability, while simultaneously stimulating angiogenesis (the expansion of new blood vessels) and mitigating the loss of interstitial cells by acting as a bridge between the skin layers.

Although the phases of healing are consistent among all demographics, various skin diseases disturb the process of regeneration. For example, chronic wounds exist due to the persistence of the inflammatory stage. This extended inflammatory period is due to extended presence of macrophages and neutrophils during immune responses. The inability to complete inflammation prevents the third, fourth and fifth stages of healing from occurring. The elderly are the primary demographic for chronic wounds and most commonly present with pressure ulcers, diabetic ulcers, and venous leg ulcers. This age group is also most susceptible to disorders of regeneration due to reduced skin elasticity and a weakened immune response.

Interestingly, different tissue systems in the human body vary in their ability to regenerate post-trauma. Due to the presence of stem cells in superficial skin tissue, the epidermis can regenerate efficiently. However, unlike the skin, which is categorized as labile, or receptive to change, cardiac cells, neurons, and skeletal tissue are considered permanent due to their absence of stem cells and limited ability to regenerate.

The timespan of the healing process depends on the extent of damage to the epidermis, as well as the stability of one’s immune system at the time of injury. In more severe cases of injury, the body cannot adequately repair itself. Any wounds which remain open are consequently more prone to severe blood loss and infection, and such cases require medical intervention. Fortunately, innovative wound healing technologies continue to advance the rate and extent of healing. These evolving technologies include negative pressure therapy, advanced wound dressings, and dermatological skin substitutions.

Negative pressure wound therapy (NPWT) relies on the promotion of an ideal healing environment. This form of intervention places an equal-pressure foam dressing on the wound site, which removes excess moisture, limits opportunity for infection, and ultimately enhances the rate of recovery by optimizing environmental conditions. 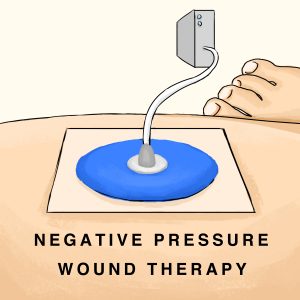 In light of the intricate functional relationships between the layers of the epidermis and the dermis, it is evident that the skin has evolved into a self-sustaining organ. Scientists have simply found ways to pioneer pre-existing processes of the skin by better understanding the physiology of regeneration and the autonomous mechanisms of skin healing.

With this in mind, the next time you picture yourself and your toddler heading into the bewildering outdoors, immersed with accidents, scratches, and burns, you might just have a bit more faith in the art of self-preservation.