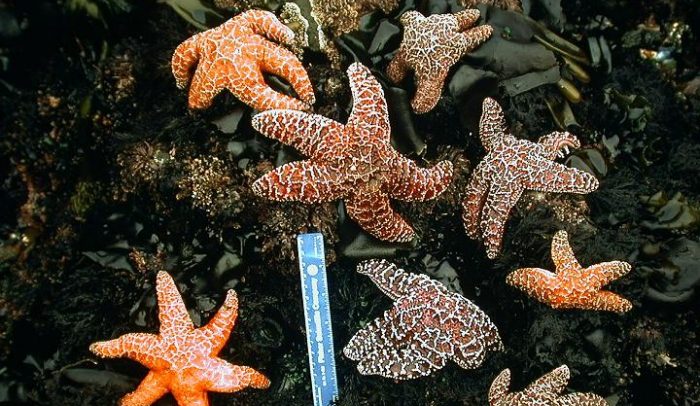 Understanding the zombie disease of the sea

Sea stars have been hit by the ocean’s latest zombie apocalypse. Lesions swell on their bodies, internal organs emerge, and limbs detach. Their amber, fuchsia, and violet colorings turn into sickly flesh gray. First noticed in 2013, scientists all along the West coast have been racing to understand the cause: sea star wasting disease. Why is it taking grip so quickly, and why won’t it go away?

In order to solve this mystery, scientists and communities have teamed up. Armed with cameras and good walking shoes, ocean enthusiasts traverse the rocky intertidal in search of sea stars, wasting or otherwise. This citizen science, or community-based science effort, builds a collaborative team to create robust datasets for professional scientists to use in studying sea star wasting disease.

Researcher Melissa Miner, based in Washington, works with the Multi-Agency Rocky Intertidal Network (MARINe) to collect and centralize animal data from coastal ecosystems between Alaska and Mexico. “One [method] targets key players in rocky intertidal, things like sea stars, mussels, and different species of seaweeds,” Miner describes, “we also have biodiversity surveys that are more inclusive both in the coverage of the sites sampled at and the species we record.”

MARINe is entirely composed of researchers, but the sea star wasting epidemic opened a way to incorporate community science work. One of MARINe’s target species is the ochre sea star: “We watched those numbers decline pretty much across the board at all our sites up and down the west coast,” Miner says.

Her goal became to connect existing citizen science communities along the West coast with MARINe’s existing monitoring efforts, despite the limited available funding. “I could train the person in charge of the citizen science efforts and they in turn could train volunteers…we’ve had no funding to give these groups, they’ve just been doing it because they really enjoy it.” Miner works alongside other members of a sea star wasting disease task force formed in 2018 to improve communication among groups working on the issue and construct a strategic action plan to provide guidance for research and restoration efforts.

Researcher Laura Anderson, based in Santa Cruz, spends much of her time in the field collecting sea star data. “We’re generally monitoring between San Francisco and Santa Barbara,” she says, “we have a lot of sites in those areas so we had a really good handle on what was going on with the sea stars in those regions.”

Anderson sometimes works alongside citizen scientists, as well. “We help them set up sites to come back to, time and time again, and monitor sea stars within that small area,” she describes. Citizen scientists can communicate any sea star sightings even outside these designated long-term monitoring sites. Anderson says, “If you’re somebody who enjoys walking on the beach, and if there used to be a ton [of sea stars] but no longer are…[MARINe has] a place to submit those observations.”

Sea stars, along with many other charismatic marine animals, have a reputation as a flagship species. “A flagship species is engaging to the public,” says Chrissy Tustison, a leader in the ongoing seadragon community science initiative DragonSearch, “People like to photograph it, people like to learn about it, it draws people in.”

Because of sea stars’ flagship-status, the sea star wasting disease citizen science effort has been immensely successful.“If this disease had hit some tiny algae species that we’re interested in the tide pools it might not have gone as well,” Anderson reflects, “without [citizen science], we would have had a great idea of what’s happening with sea stars around just central California, but we wouldn’t have been able to extrapolate that up and down the coast.”

Miner describes in particular a group of three citizen scientists who regularly observe sea stars in their local habitat in Washington. “[They] go out on a monthly basis to their local site, rain or shine, in the middle of the winter out there in the freezing cold…there are lots of stories like that where people are very much interested in what’s happened with the sea stars in their home areas.”

With the relatively simple method used by MARINe to collect sea star data, Miner and the rest of the community science leadership team are able to increase public interaction with ongoing scientific research.

A common misconception about the citizen science movement is that it is simply using people to generate free data for professional scientists. However, Tustison says, “citizen science, or more appropriately ‘community science’ is taking complementary skills and putting them together to achieve a greater result than anyone could achieve individually.”

Ultimately, this collaborative effort allows avenues for more hands-on engagement, enables the public with tools to conduct the first steps of science, and overall bridges professional scientists with broader audiences. “It has been a really great tool for us to be able to expand our knowledge about what’s happening with sea stars in areas we wouldn’t be able to sample otherwise,” Miner reflects, “and I think they learn a lot from talking to us, but we also get a lot back from those interactions with them.”

So, looking at this community-collected data, what’s happening with sea star wasting disease right now? According to Miner, it has been persisting at MARINe-monitored sites at a low level for the past seven years. The cause of the disease itself is unknown. Scientists have isolated a virus, but they hypothesize that the virus interacts with other factors such as rising ocean temperatures to ultimately cause the disease.

Community and professional scientists have seen some sea star recovery in the Northern areas of the West coast, but much less has been seen south of Point Conception. However, new data on several species, including the charismatic ochre star, continues to drive forward understanding of the disease and its impact on intertidal communities.

“It’s been really rewarding to see how excited and dedicated people have been,” Miner says. With collective mobilization of this growing community comes hope for defeating the zombie apocalypse and restoring the West coast’s sea stars.

Interested in community science? Get involved in a project near you through SciStarter!