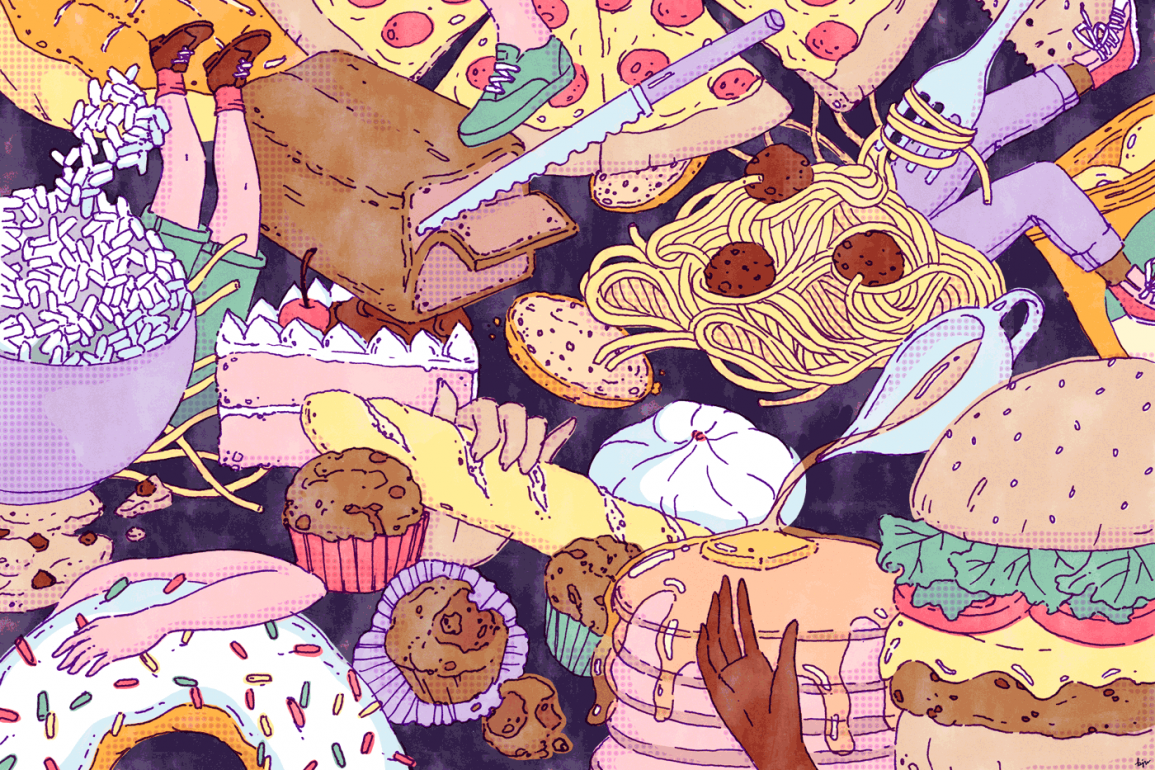 Food as Fortune-The Epigenetics of Pregnancy

Have you been feeling a little down lately? Is your academic performance not where you want it to be? Has the freshman fifteen turned into the sophomore sixty? Don’t worry; I’m not trying to sell you any miracle elixirs or life coaching plans. But maybe, just maybe, you can blame your mom’s pregnancy habits? And while this may sound a little too good to be true, the science behind it suggests otherwise.

How can it be possible that your mom’s strange affinity for fries during pregnancy has caused you to get a double serving of rice at Goody’s? Well, recent studies have focused on examining a phenomenon referred to as fetal programming, in which the diet of mothers during pregnancy can modify gene expression and change the way we develop for the rest of our lives.

Fetal programming comprises a subset of the emerging field of epigenetics, which describes how environmental factors can impact the manifestation of our genes. While the definition doesn’t sound terribly exciting, it has tremendous implications for the future in fields such as personalized medicine (1). Don’t feel at the edge of your seat yet? Don’t worry, we have many blogs to go in this series where I’ll be delving into a variety of subjects related to epigenetics and the endocrine system that will leave you feeling that maybe you can shift those newly acquired 60 pounds, become a genius, and grow superhuman capabilities.

Typically we associate pregnancy diets with raging hormones that cause voracious and sometimes strange cravings. Think pickles and peanut butter or spaghetti and maple syrup. But is this really good for the mother or the baby? While the current body of research remains small, we do see important links between dietary patterns and a process called DNA Methylation. Now before you run to get your biology book, let me explain. DNA Methylation involves the addition of a methyl bond to a DNA segment, much like adding a dog to a family. Seems innocuous enough, right? Well if you’ve owned a dog, you know that they can be life-changing. All of a sudden you find yourself waking up at 5 am in the rain to give it a walk. Or trips to the dog beach are now a regular occurrence rather than a spectator sport. The same goes for DNA; methyl bonds can either wreak havoc or make the DNA better than ever as they impact expression and coding, processes that determine the regulatory biochemical reactions in our organ systems. (4).

Of course, given the complexity of our environment, we could sit here for days discussing each aspect that impacts fetal development. But scientists have chosen to hone in on specific factors.

First, let’s talk about nutrients. In the same meta-analysis referred to previously (published in the Journal of Obstetric Medicine), researchers focused on vitamin intake in relation to pregnancy and identified a group of micronutrients known as methyl donors (choline, folate, B vitamins, betaine) that increase optimal methylation. You probably aren’t too familiar with them, but we see them in fortified cereals, whole grains, leafy greens and a whole host of other things that can’t be found in a typical college student’s diet (4).

For all of you gym-buffs out there, you may be wondering about the impact of macronutrients. While we need to consider the difficulty of isolating their individual impact, there have been proven links between low protein intake in the mother and poor methylation of their offspring’s genes corresponding to cell differentiation and growth (the process by which cells get a “job” and develop in accordance with their role) in animals.With respect to human studies, we really do not have that much information, but the general consensus remains that folic acid carries importance in the development of gene regulation, which means that those gummy vitamins may be doing you more good than you give them credit for (4).

All of these factors depend heavily on the in utero environment (in the belly).  Many papers cite the Dutch Winter Famine during the World War II era. The scarcity of food led to maternal malnutrition throughout the course of the pregnancy and children were born at lower birth weights than before. Future studies demonstrated that children with low birth weights had a higher propensity for weight gain later in life and were prone to insulin sensitivity, a condition that often precedes type II diabetes and adipose (fat) tissue accumulation. What is the explanation behind this? You guessed it: methylation, or more specifically a reduction in insulin growth factor methylation that stemmed from an inability of the mothers to produce growth supporting quantities of insulin. Not only does this give scientists more to think about, but should also make us think more critically about the multi-generational implications of war with regards to health (2).

Due to the relative age of epigenetics compared to other areas of studies, human subjects have not been explored in as much detail. Yet, in rats, we have seen that malnutrition has impaired beta cell functioning and development which can be considered a major detriment. Beta cells secrete insulin and impairments to this function can be caused by a reduction in mass or destruction, leading to diabetes. But don’t go running for a Big Mac in the name of nourishment just yet, as the opposite has also proven true. Animals fed a western diet—-high in fat and carbohydrates (think a Big Mac and fries)—produced offspring with increased adiposity or fat tissue. This strongly suggests that maternal dietary habits can program obesity in the next generation. And as scary as this sounds, it means that we need to pay much more attention to maternal nutrition and vitamin intake (3).

I know you might just be wondering—if something as simple as adding a few atoms to a molecule can have such intense ramifications, what else can? Luckily, I have an answer for you; I’ll explain with an analogy: the process of histone modification. See, histones package DNA and act as their “director.” If you change the director of a movie, you change the movie’s contents and vice versa. The same concept applies to histones—changing them will change the DNA composition and vice versa. While there are similarities to methylation, histone modification involves regulation by distinct enzymes and reactions. Taken together, these processes have the potential to silence genes, which will have significant ramifications with respect to promoting or reducing the expression of gene-related diseases like cancer and so forth (2)

Alright, well we definitely shouldn’t make our mothers assume total responsibility for our current situations. But the discovery of markers that can modify gene expressions can be the 21st century’s answer to “listening to your body” and uncovering a new language to “communicate with yourself.” Even if we don’t know too much about it now, we know enough to say that expecting mothers might want to lay off on excess carbs.