After years of waiting, it’s finally here; this July, Pokemon Go was released in the U.S. and many other countries. Unlike most of the Pokemon franchise – trading cards, animated movies and TV shows, and games for various generations of Nintendo game systems – Pokemon Go is a free app that can be played on most current smartphones. It utilizes Augmented Reality technology, using your phone’s camera to show virtual images of wild pokemon overlaid in the world around you. It also tracks your location via GPS to determine what pokemon you will encounter. Future updates may bring in other aspects of the classic Pokemon games, like trading and battling against friends. 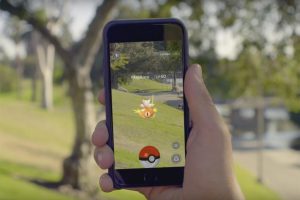 A virtual reality image of a Magikarp is overlaid over the phone’s view of the field, creating an augmented reality experience. (Source)

I’ve been playing the game since its release, and I really enjoy it. Like everyone who downloaded the game shortly after the release, I wandered around my hometown collecting pokemon, hatching eggs, and cursing the inconsistent servers. I even talked to a few people out and about. In the recent dialogue surrounding the game, many people have pointed out that certain functions in the game promote socialization and physical activity: lure modules can attract pokemon to one spot, benefitting anyone in the area, and GPS tracking to hatch eggs only works up to certain speeds (so driving in a car won’t register any significant distance traveled).

From a biological perspective, this mechanic could be beneficial by promoting biking, walking, or slow-moving public transportation in place of car travel – although the actual reduction in emissions probably isn’t very significant. Recent updates have added notifications to further discourage playing while driving, which will hopefully prevent accidents involving humans and animals alike as well as further promote physical activity. While the current mechanics seem to neglect environmental interests, the game has quickly created a massive global community; unity is a powerful tool, and a necessary one in combatting the environmental issues we’re facing. Wild pokemon only stick around one area for a short time, creating a sense of urgency that promotes quick action, while long term issues like climate change don’t seem to inspire action. If environmentalists could emulate some of those tactics, perhaps more people would be motivated to get as involved in environmental issues as catching pokemon.

In the case of conservation, it’s quite the experience to see people (myself included) get more excited about a digital image of a video game animal than seeing real animals in their natural habitats. Many were equal parts excited and frustrated by the fact that certain pokemon only appear in certain areas; for example, water pokemon appear mainly in close proximity to actual bodies of water. The same principle applies for regular animals, but doesn’t seem exciting in the slightest. Many pokemon are modeled after real animals as well, but obviously look and act in much more interesting ways – they’re specifically designed to appeal to us. The article “Fear Not, Pokemon Will Save the Planet” describes the universe as a balance of capitalism and environmentalism benefitting humans and animals, which is something that could stand to be applied to our own society. It says a lot that rare virtual creatures inspire more people to go outside than real animals that are becoming very rare very quickly. The Pokemon universe actually exemplifies a kind of ecological utopia; while there are bustling cities and endless technologies, every part of society is engineered around pokemon. Jobs are pokemon-centric, and specific habitats are maintained to promote diversity. While the real world’s list of species is steadily declining, each new generation of Pokemon game comes with an ever growing list of new species and variations. All of these aspects of the Pokemon universe draw us in, yet our own planet doesn’t seem to inspire the same kind of enthusiasm. Rhyhorn is great, but what about the creature that inspired it, the rapidly declining rhinoceros?

Catching Rhyhorn (right) is great, but many of its great characteristics are inspired by various species of rhinoceros (left), all of which range from threatened to nearly extinct. If you’d like to learn more about the species and subspecies of rhino, or want to help conservation efforts, check out the World Wide Fund for Nature/World Wildlife Fund’s information. (Source 1) (Source 2)

I’m in full support of the Pokemon Go hype; the game is cute and fun, and is encouraging people to be social and become more familiar with their surroundings. But the separation from our environment and the other creatures that we share it with needs to be addressed sooner rather than later. Maybe Pokemon Go and the rest of the Pokemon franchise can become an example for conservationists to come up with new ways to get people as invested in saving our planet as they are in finding a Dragonite.