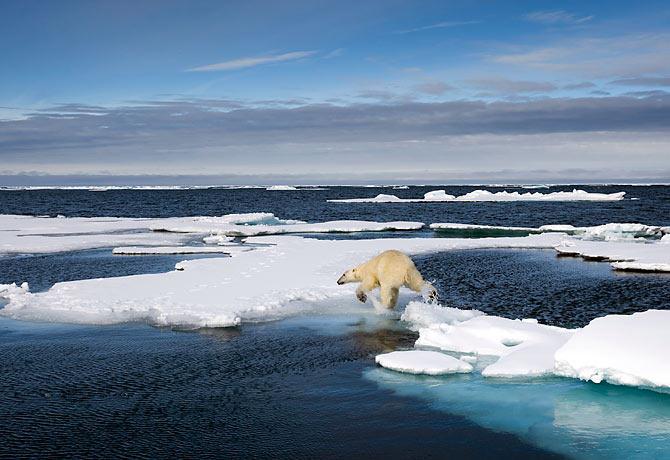 It was the year 2050. Despite all of the environmental warnings, humanity continued to operate as it did over the past several centuries. Global temperatures had risen by approximately 6℉, accompanied by a 45% decrease in Arctic Sea ice, since the beginning of the millennium. With the sea ice gone, only a narrow strip along the northern coast of Canada and Greenland remained: the Last Ice Area. However, one individual, Nora, a largely solitary beast residing on the northern Canadian coast, was so removed from humanity that these numbers meant nothing to her. She proceeded with her daily life as she saw fit and, in the heart of an environment in decline, this polar bear pressed onward.

The sun hung low over over the horizon as Nora lumbered across the snow. She had not seen another individual in months, not since before her hibernation. The tundra seemed devoid of life, but she needed to find prey somewhere, to find some semblance of life in the vast white expanse that could sustain her. The late spring air felt cold on her clear fur, but much warmer than last year.

The blue sea glistened on her left as she traversed westward, across the wet snow, along the northern Canadian coastline. It expanded across the horizon, seemingly over the edge of the earth. The coastline seemed a lot closer than Nora had remembered. The increase in global temperatures pushed the coastline inland. She had never been in the water herself, despite her natural inclination for swimming. Her webbed paws, developed over thousands of years of polar adaptation, in conjunction with her lungs were becoming an irrelevant combination in the new environment. With so much water, she was unable to follow her instincts and follow her prey from icy mass to icy mass as her ancestors had done.

Nora wondered if any life could survive in the vast, ever-expanding water. Little did she know that several decades ago, the sea was bustling with life. However, with the upward trend in ocean acidification, the environment saw the death of countless microorganisms, leading up through the marine food chain. The increase in atmospheric carbon dioxide as a result of human pollution had detrimental effects over the past centuries. Uptake of CO2 caused a decrease in pH, resulting in ocean acidification. Although Nora had a penchant for seal blubber, she instinctively knew that she would not find it in the water. Nora continued her search for life on land, and pressed onward.

Nora had not eaten since before her slumber and she was starving. She felt the hunger painfully manifest since her awakening. In her ten years of life she dealt with food scarcity; however, the future was looking bleak as scarcity transitioned to absence. As she continued her search, she could not help imagining snacking on something nice and fatty. Her previous meals, before her hibernation, never seemed sufficient enough for her. As big as caribou were, they were never satisfying. Yet, even finding such an animal would prove to be a blessing for Nora. Without food, her energy was declining; but hungrily, she pressed onward.

The sun once again hung low in the sky. Nora had exhausted most of her energy searching for other forms of life in the tundra, to no avail. Hungry and tired, she laid down in the wet snow, snout over paw. And so the last polar bear of the Arctic slept, dreaming of one day finding food, or at the very least some semblance of life, in the receding tundra.