Drifting silently along the ocean floor exists a tiny creature with a large reputation. Spanning a meager 4.5mm in diameter, Turritopsis dohrnii (colloquially known as the immortal jellyfish) has gained scientific recognition as an organism that defies the most basic scientific concept: all living things must die. The jellyfish possess a unique ability to revert to their earliest developmental state and grow all over again. 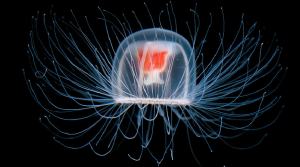 Scientists at Kyoto University’s Seto Marine Biological Laboratory discovered that one mechanism by which the jellyfish accomplishes this is through transdifferentiation. This is a process in which a cell changes into a different type of cell (e.g., a nerve cell to a muscle cell). However, there is still uncertainty over the primary biological course of action the organism uses. Because of its rarity, Turritopsis dohrnii has only been studied by a few scientists. The findings so far have been linked to a survival mechanism in which the jellyfish essentially ages backward during periods of stress (e.g., physical harm or environmental unrest). Turritopsis dohrnii have also been found to thrive in all ocean waters, allowing for geographic expansion of the species. While it may be a stretch to say this jellyfish holds the key to immortality, understanding the mechanisms that allow for such eccentric behavior could open the doors to radical scientific and medical advancements.