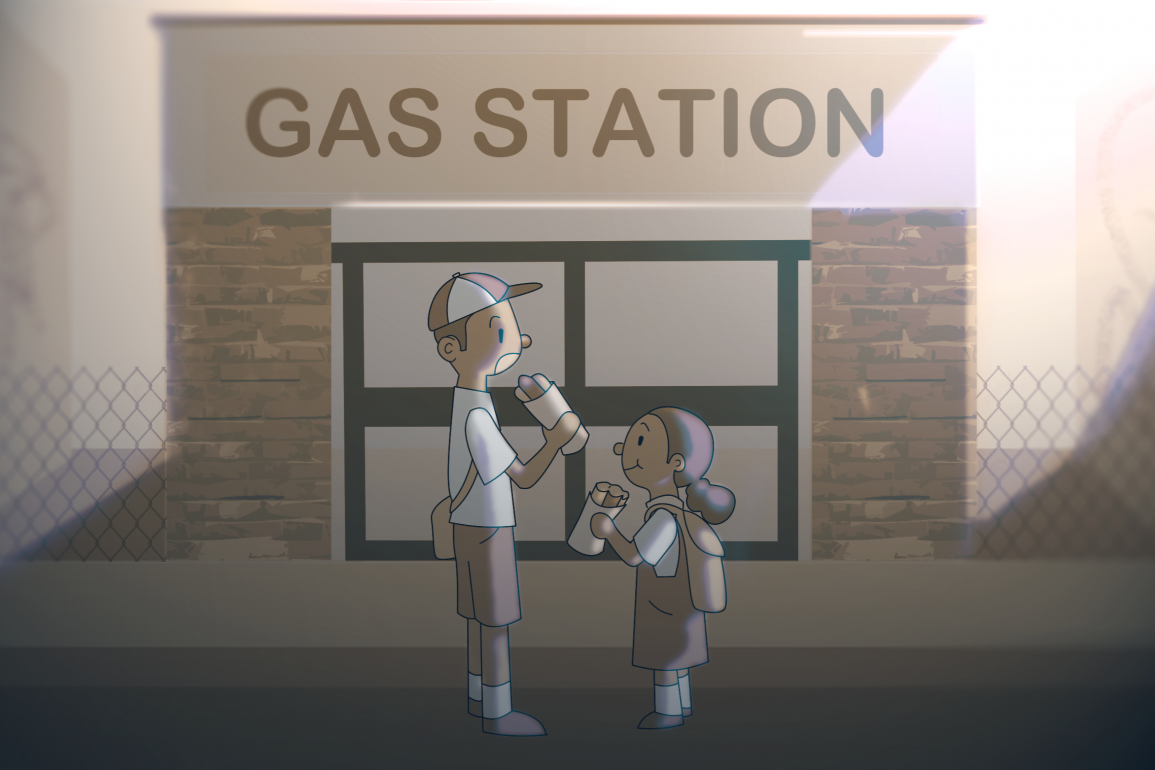 “Finish your vegetables before you get dessert.” When heard at a meal, this phrase is often met with groans of displeasure from its audience. Children push around the last few vegetables on their plate, minds drifting away from the dinner table while their parents begin lecturing them on healthy eating habits. Parents frequently encourage their children to eat vegetables, a food considered as healthy, because it is a common belief that a healthy body requires a diet composed of fresh, nutrient dense foods. There have been many models and debates over what this healthy diet should look like. From the food pyramid to the food plate, there is an abundance of guidance detailing the types and amounts of foods to meet your body’s daily requirements. Both the food pyramid and the food plate have been used by the US government to advocate for a healthy diet in which at least half the food volume is composed of fruits and vegetables. For many people in the US, access to fresh and healthy produce is unattainable due to distance, cost, or time. Large varieties of fresh fruits and vegetables are mainly found in grocery stores, and this type of food is not only perishable, but also time-consuming to prepare. In these situations, highly processed foods from chain restaurants are available closer and cheaper. As a result, people that live in areas with insufficient food access often show higher rates of diet-related morbidities, such as diabetes.

What do you call an area in which you can find a fast food restaurant on every block, but where the nearest grocery store is one town over? Traditionally, these communities have been described as food deserts. Food deserts are formally defined through two components: increased poverty and lack of access to healthy food. Food deserts have a poverty rate greater than or equal to 20%. In urban areas, this also means that the median family income is less than 80% of the median family income in the surrounding area. Non-urban communities fall under this criteria if their median family income is less than 80% of the statewide median family income. Lack of access to healthy foods is defined by distance to grocery stores, and the amount of people that are deemed as “living too far”. In urban food deserts, one third of the population lives over one mile from the nearest grocery store. In non-urban food deserts, one third of the population live over ten miles from the grocery store. In addition, many neighborhoods located within food deserts have a majority of black, indigenous, and people of color (BIPOC) populations, with black and indigenous communities being the most disproportionately affected.

The creation of food deserts in the US is linked to predatory housing acts that continue to segregate neighborhoods along racial and wealth lines. Neighborhoods that lack access to grocery stores and healthy foods today are most often lower income communities with a majority of black, brown, and indigenous residents as a result of historical redlining. Redlining was a practice used by the US government in the 1930s to highlight these racial communities as high-risks to mortgage lenders. As a result, it was more difficult for businesses, like community grocery stores, to acquire the capital to build and operate in the previously redlined BIPOC neighborhoods. The redlined communities of the past are still identifiable on the maps of today, as many of them still crop up when looking at maps identifying food desert areas.

Recently, new terminology has been created by these communities to describe their affected situation. New York food justice advocate Karen Washington coined the term “food apartheid” to describe the segregation of food access while still giving respect to and recognizing the power and resilience of the families that live in these spaces. “Food apartheid” challenges social infrastructures like housing and poverty, in addition to nutrition, that creates segregated spaces of food access. In these areas, people lack access to affordable, healthy food and education about food and health. While the term “food desert” is used as a physical descriptor for this lack of access, the term “food apartheid” highlights the forces of segregation behind this problem. This model examines how food insecurity and low socioeconomic status disproportionately harm the health of poorer communities of color, especially in urban areas. This harm is visible in the  higher cases of preventable causes of death, like diabetes or heart disease, in food deserts.

For many communities, living in an area affected by food apartheid means that daily diets mostly consist of processed foods and consequently, are high in simple carbohydrates, like sugar. In the absence of grocery stores, the options are often limited to a selection of fast food chains and gas station convenience stores. Many of these foods also have a high glycemic index, which is a ranking used to describe how quickly and how much a certain type of food will raise your blood sugar after you ingest it. Foods with a high glycemic index, like white bread, are metabolized quickly from complex carbohydrates into simple sugars after consumption. This causes a large spike in blood glucose, which triggers the pancreas to release insulin. Insulin then serves to bring blood sugar levels back down by signaling for glucose uptake and glucose storage (through glycogen synthesis). A regular diet of high glycemic index foods, common in areas affected by food apartheid, results in consistently elevated blood glucose (hyperglycemia) and increased insulin levels (hyperinsulinemia). Eventually, an accumulation of hyperglycemic and hyperinsulinemic instances puts the body at risk for developing insulin resistance and type 2 diabetes, a condition that is worsened by a continual lack of access to nutritious, low glycemic index foods.

In addition to the excess sugars present in processed foods, communities living under food apartheid also tend to consume an excess of sodium through their meals, which puts them at higher risk for many chronic diseases. This excess sodium can be found in common sources like deli meats and bread. Sodium levels in the body are regulated by the kidney, which conserves water to dilute blood sodium concentration when blood sodium levels are too high. This extra water retained by the kidneys when sodium levels are high, is redistributed to the blood, resulting in a notable increase in blood volume. Consequently, the heart must work harder to circulate this increased volume of blood, which can cause chronically high blood pressure within the blood vessels. Repeated instances of high sodium consumption, therefore, puts people at risk for conditions like cardiovascular disease and chronic kidney disease. Prevention of conditions like these requires careful and routine regulation of daily sodium consumption. While cooking meals from scratch is a major way for controlling sodium levels in food, this task requires the financial means to buy the ingredients, and more importantly, time. However, people from lower income communities often lack both the transportation to commute to areas that sell groceries and the money to buy higher priced nutritious foods like fresh produce.

A lifetime of a diet high in sodium and sugar paired with the excessive caloric intake  encouraged by the engineering of processed foods is also associated with a shortened lifespan. Through biochemical processes, the high fat, sugar, and sodium levels of processed food often encourage over consumption, which can lead g to caloric excess and eventually, obesity. The resulting increase in body mass increases metabolic rate, especially with age. As a consequence , higher levels of oxygen consumption and metabolism lead to an increase in reactive, oxidative byproducts. These byproducts cause bodily stress by prematurely damaging the body’s essential DNA, proteins, and lipids. This damage can expand to the level of tissues and organs, and is implicated in the development of life-threatening conditions, such as heart failure and stomach cancer, which can prematurely shorten one’s lifespan.

Many grassroots community organizations have turned to small-scale, sustainable gardens to resist the damage that food apartheid inflicts on health in their neighborhoods. These gardens are usually run by local members, who work together to grow and distribute seasonal crops. This type of agriculture, particularly urban gardening, helps to compensate for a lack of access to fresh, affordable produce that is prevalent in cities. Not only does urban farming give people access to food, it also gives them autonomy. People like Karen Washington, who is also the creator of the term “food justice,” lead and organize to educate their communities on sustainable farming and nutritional eating practices. In addition to transforming empty lots in the Bronx into spaces for growing food and hosting farmer’s markets, Washington’s organization, Black Urban Growers, provides educational and community support for Black leaders in agriculture and food justice. Urban farming is a praxis of food justice that creates sources of both income and healthy food for neighborhoods affected by food apartheid.

In addition to urban farming, an emerging solution that increases access to not only healthy, but sustainably grown foods is the development of local “food forests.” Food forests are a type of permaculture, or agriculture that is designed to mimic the ecosystem of its location in order to be self-sustaining. The ecosystems are made up of multiple layers and designed with a three dimensional spatial organization of plants, rather than the two dimensional organization of the monoculture agriculture normally seen today. While monoculture agriculture only utilizes a single, flat layer on the surface earth to grow crops, food forests utilizes the space above and below this layer as well to sustain a complex network of species. The top canopy layer is made of fruit or nut trees, while the bottom root microbiome layer is composed of root crops like potatoes and carrots. In between these layers, these forests contain berry-yielding shrubs, herbaceous ground cover to prevent weed growth and water loss, and vining plants, like beans. Although the overall content varies based on region, all plants in a food forest have edible or medicinal purposes, and are available for communal use and care. Food forests are a relatively radical and new approach. They take time to cultivate, so it is likely that their impact will be better seen and accessed some time in the near future.

Although food apartheid is an issue of the present, it is the product of historical segregation and racist government policy from the past. As a result, lower income BIPOC populations are at a far higher risk for diet-related health issues because they live in neighborhoods that lack the wealth and infrastructure to support large chain grocery stores due to historical redlining. These issues are painful and costly to treat, leading to situations that trap families without wealth into continued debt and generational trauma. In these diseases, such as diabetes or heart disease, oftentimes prevention is far less invasive and more cost efficient than treatment. Prevention of these diet-related health issues begins at a societal level, through programs like urban farming or food forests, which puts access, education, and health autonomy into the hands of the historically disenfranchised communities.