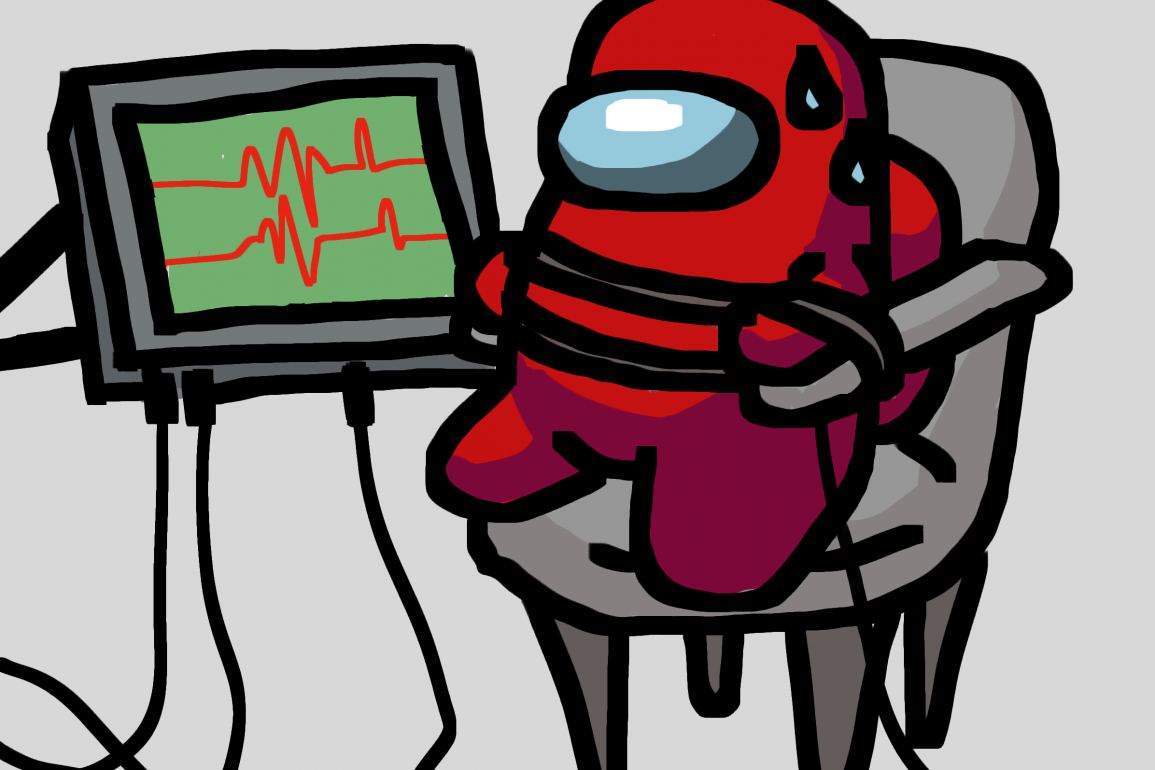 In my opinion, Red is always sus. I know this because I play Red all the time, and I’m always the first one ejected.

If you know what I am talking about, you may be one of the victims of the rising mafia-esque quarantine game, Among Us. Players are selected for one of two teams: Crewmate who travel around the map completing necessary tasks, or Imposter, who aim to sabotage and kill the crew without arousing suspicion. The trail of bodies left behind at the scene and visual and locational clues on the identity of the Imposter lead to a playful game of con and deception.

Despite the plethora of online games on the App Store, Among Us reigned as #1 on the Top Free game chart for months. How and why did this game become so popular in the global community? The answer is that we love the art of deception.

Lies and untruthfulness drive our entertainment. Stories that have survived generations, such as great Shakespearean plays like Hamlet, often feature lies layered bringing about tragic endings. Popular movies are peppered with betrayals and plot twists  keep audience engaged during three hour screenings. We love hidden role games, like Among Us, where we pretend to be trustworthy. Given our constant chase for deception, I wanted to explore the behavioral motivators of lying, various forms of deception employed by animals, and preventative measures to detect our crafty behaviors.

In the animal realm, many species use camouflage as a form of deception. By displaying a pattern similar to their surroundings, animals are able to blend into their background.

For instance, the frogfish, which is a type of angler fish, blends into the coral reef or surrounding rocks and waves where its imitation lures small prey. Other animals, who may be in the lower ranks of the food chain like the swallowtail caterpillar, evolved features and patterns mimicking a large animal, such as these eye-like patterns to fend off predators.

Animals of all complexities, from sponges in the coral reef to tigers in the jungle, utilize camouflage as an adaptive mechanism. Their deception strategies arise out of the need for survival: one to hunt and the other to hide. However, the cause for human lies is very different from animal needs. Rather than as means of survival, most of our lies stem from our social relations, or rather, for “social survival.”

It is interesting to note that lying can be an innate part of a human baby. Babies can exhibit lying behavior as early as 42 months. For example, some babies test their crying to gain attention to themselves, regardless of necessity. Dr. Reddy, who investigated these whimsical lies explained these “fake crying” are how the babies learn social interaction with their parents. These lies grow in complexity as their brain develops by learning how to add context, making situations more believable, and preparing for any challenges to their lies.

Some aspects of lying can be attributed to genetic factors, such as the Dopamine Receptor D4 (DRD4) gene. The D4 dopamine receptor is responsible for neuronal signals in the mesolimbic system, commonly known as the “reward pathway” activated by dopamine. The DRD4 gene, also known as the “thrill seeking” gene, is associated with a number of disorders related to impulse-control such as ADHD, schizophrenia, and anorexia nervosa. One such allele variation is the 7R+ genotype, a 7-repeat allele within the variable number tandem repeats (VNTR).

Dr. Justin Garcia of Binghamton University found that men with these 7R+ genotypes were more likely to have more promiscuous sexual  experiences, and more often engaged in extra-relationship sexual experiences and partners. A further research on these repeated alleles revealed that those with this genotype tended to have reduced binding affinity for dopamine neurotransmissions. The reduced binding affinity could mean that these people with 7R+ genotype will feel less “thrill” per their dopamine-releasing actions, thus seek bigger thrills to satisfy their dopamine needs, often engaging in unfaithful relationships.

Others attribute some lies to a “tend and defend” behavior, controlled by the oxytocin hormone. Oxytocin is commonly called the “cuddle” or “love” hormone, and plays a major role in social interactions. When it comes to achieving the benefits of social acceptance, oxytocin is greatly involved in the process, even in the means of lies. Dr. Shalvi and De Dreu at Princeton University gathered adult men to simulate coin tosses in a study. The simulation provided an opportunity to lie about their score in a game in which all members will be rewarded for collective performance. When administered with oxytocin, as compared to a placebo, the men were more likely to lie. However, this wasn’t the case when the participants  were told lying about their scores would only reward themselves individually. This shows that some aspects of lies, particularly the white lies people tell to save others from embarrassment or criticism, are sprung from an innate need to preserve the benefit of the group.

As a kid, my mother warned me against lying; that deceiving someone will get easier with experience. It turns out that her view is also supported by biological evidence. Dr. Neil Garrett’s Research suggests that the amygdala, a small part of the brain responsible for various emotional responses such as fear and anxiety, decreased in activity as the lies grew in repetition. This experiment was done monitoring subjects’ brains while they played a game which rewarded the players for successful deception. As the players gained more financial reward for the lies, the amygdala responded with lesser intensity. Essentially, the brain was desensitized to the repeated lies, and felt less of the emotional responses of a lie: guilt, fear, and uncertainty. Dr. Garret further shared that these muted responses, and a continuous reward for the deception, increased the likelihood that the participants would lie again.

So what are some ways to distinguish deception from truth? When we hear the phrase  “lie-detecting,” we can’t help but imagine the classic scenes of polygraph tests. The science behind polygraph tests is rather simple. The various equipment around the person in question measures the heart/blood pressure, respiration, and skin conductivity. The changes in these measurements while answering a series of questions alert the interpreter to call out where a lie has been made. However, the polygraph test is a very controversial method, and not accepted as hard evidence in courts, despite its sound theories. This is because of the variation in each persons’ physical response to lies, and the possibility that the confessions come from the “fear” of the crimes being revealed through the polygraph test; thus the polygraph test is used as a “fear” detector rather than a lie detector, and is more often used to determine if there is anything hidden in the responses rather than to seek the truth.

Lying is a tool that animals and humans both use in their daily lives. Surprisingly, although we initially imagine lying as a cognitive tool, our skills of deception can be coded into our DNA, or even be controlled by our hormones for the greater good of the community. Even practicing lying will eventually help us to lie better, as our amygdalas feel less nervous after every act of deceit. Perhaps some of us are truly, genetically born to be the best Among Us Imposters. But for now, it seems like my amygdala needs more practice to stay calm during my lying spree in chat. Either way, please don’t kill me while I do my electrical wire task.