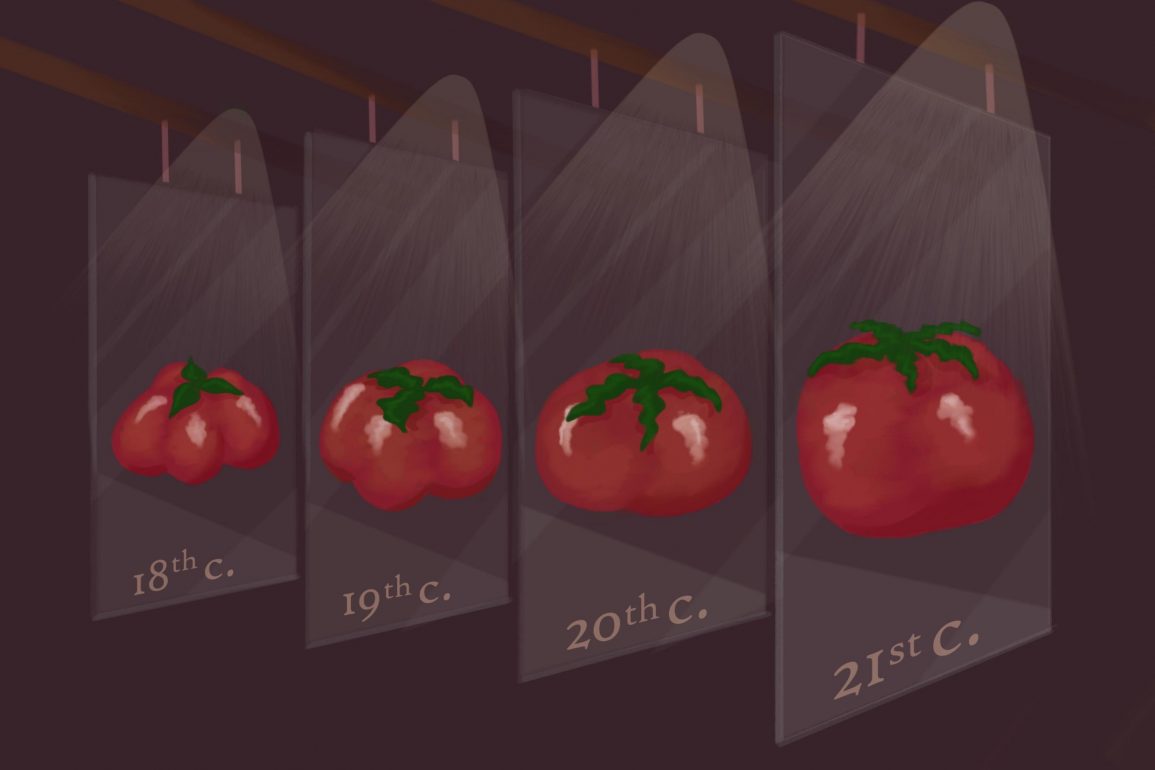 Walking into the produce section of any grocery store, you are always greeted by the sight of uniform rows of fruits and vegetables. The pyramids of shiny waxed apples are built out of identical pieces of fruit: each of them the same size, color, and taste. Sometimes, you might spend a little too much time weighing a piece of fruit in each hand, trying to decide if one looks better than its almost identical twin. If you have trouble choosing between nearly identical pieces of fruit today, how might you have reacted to the vast biodiversity of produce and crops in the past?

Today, when you think of watermelons, what comes to mind? You might picture a large, striped, green melon that yields bright red, juicy flesh dotted occasionally with small black or white seeds when cracked open. But watermelons haven’t always looked this way. Giovanni Stanchi’s still life, Watermelons, peaches, pears, and other fruits in a landscape, paints a vastly different image of the watermelon in seventeenth century Italy. The rind of the fruit is thicker, and the flesh itself is segmented into several swirling triangles when the watermelon is cut in half. Rather than the rich ruby red that appears in watermelons today, the inside of this fruit is a muted, pale pink. The seeds inside are large, plentiful, and black, clustered together within the swirls of flesh. Over the years, selective breeding has allowed growers to manipulate the characteristics of this fruit and cultivate it into the watermelon we know today. As a result, more recent paintings such as Alvan Fisher’s 19th century A Still Life with Watermelons and Peaches showcase a fruit that more closely resembles the watermelons that fill up the enormous cardboard boxes in the grocery store in the summer.

Similar to the watermelon, tomatoes have also undergone significant changes throughout history.  James Peale’s 19th century painting, Still Life: Balsam Apple and Vegetables, depicts two tomatoes in the foreground. While those tomatoes still have their signature red color, their lumpy, asymmetrical, and tilted figures appear more like small pumpkins rather than the smooth tomatoes found in grocery stores of the present. The change in the shape of tomatoes parallels the rise in mass production as crop characteristics were modified to better serve the transportation and yield needs of farmers. Tomatoes were genetically modified to inhibit the gene causing them to ripen before they arrived at the grocery store, so that they could withstand longer trips from farms. However, this change also had unintended consequences in terms of tomato taste and appearance. As a result, these specific tomatoes exhibited a less robust flavor that makes them recognizable in many global cuisines. These modified tomatoes were also more uniform in appearance, with a rounder and more symmetrical shape.

Records of historical art provide important imagery and context to the genetic analysis and research on historical plants and produce. A movement, known by the name of #ArtGenetics was started by Ive De Smet, a plant biologist, and David Vergauwen, an art historian. According to Smet, “We may have some of the genetic code for certain ancient plants, but often not well-preserved samples, so looking at art can help put these species on a time map and track down their evolution.” This movement exposes scientists to art submitted by the general public, thus providing the scientists with resources to better understand how plants have evolved phenotypically through selective pressures. Produce, like the watermelon and tomato, are popular still life subjects that have been tracked extensively through the #ArtGenetics movement.

So, how did the unrecognizable, almost alien forms from the still life paintings of the past “become” the fruits and vegetables in today’s grocery stores? The foundation of crop modification and selective breeding lies in the theoretical frameworks created by Charles Darwin and Gregor Mendel. Darwin’s theory of natural selection and heritable traits and Mendel’s statistical model of genetic inheritance together helped guide one of the earliest techniques of plant breeding: selective breeding and pollination. Selective breeding involves identifying multiple plants that have desired traits (like large fruit size) and introducing the pollen of one desired plant to the flower of the other. With repeated cycles of selection and cross pollination, the likelihood of the desired trait showing up in future offspring increases.

Another technique with which plant breeders modified the traits of their crops was through mutagenesis, a method developed  in the 1940s. When mutations occur naturally in organisms, new genes and traits are introduced into the species’ gene pool. Mutagens, such as electromagnetic or particle radiation, can be used by plant breeders on plant propagules (parts of the plant that allow it to “propagate” itself, like seeds) to increase the frequency of mutations. By increasing the frequency of mutations, plant breeders raise the chance of a “helpful” mutation occurring, like one that may increase the quality or yield of a crop. Although uncommon today, this technique was widely used through the 1970s to create varieties of other crops like rice and grapefruit.

Today, industrial agriculture and mass production has seen a shift in selective breeding techniques from antiquated techniques like mutagenesis to more precise methods of genetic modification through DNA recombination. This technique works to modify plants by introducing desired genes from outside sources (such as viruses) into the plant’s genome, which ensures that the new variety of plant takes on the desired trait. This method was particularly impactful in the papaya industry, where it introduced viral resistance genes into Hawaiian papaya trees. Genes containing the desired resistance trait were first cut out of the viral RNA using enzymes and then amplified using PCR. The amplified genes were subsequently packaged by adding papaya DNA on both ends of the gene, then inserted into papaya cells so that they could be incorporated into the papaya genome. The result was astounding: more than 80 percent of papayas grown in Hawaii are now genetically engineered as a result of successful viral resistance.

Unfortunately, the advantages resulting from scientific advancements in crop modification also come with consequences that impact economies, businesses, and biodiversity.

The influx of genetic modification has brought with it a new legal challenge. Now, many seed varieties are considered as intellectual property that are illegal to reproduce. Today, Monsanto is one of the largest companies in the agricultural biotechnology industry, and the company holds a large majority of patents for genetically modified seeds and crops today. Since the natural reproduction method of most plants is through random, environmental seed and/or pollen dispersal, Monsanto has encountered and pursued an abundance of lawsuits over the past years. According to a report by the Center of Food Safety, Monsanto has sued farmers in instances where their fields were contaminated with seeds or pollen from a neighboring GMO crop. On the other hand, Monsanto alleges that these cases are not due to “inadvertent contamination.” The company states on their website that they promise to never sue farmers who unknowingly used their patented seeds, or if trace contamination (<1%) occurs in their fields. These lawsuits exemplify how the popularization of GMOs and the ability to patent living organisms have resulted in conflict between farmers and corporations, both inside the court and out on the fields.

Even though techniques like DNA recombination might provide us with a short term solution to crop diseases, the results often ignore the long term problem of monoculture. A monoculture can be defined as “the practice of fostering just one variety of something,” and one of the most popular monocultures today is the Cavendish banana, which makes up 99% of the banana varieties exported from large scale farms in South American countries, like Colombia. The Cavendish monoculture was initially popularized for its resistance to Panama disease, a disease which destroyed the previously popular Gros Michael variety of bananas. Ironically, the Cavendish monoculture is now threatened by Panama disease itself, as the disease strain has mutated enough to render the initial resistance ineffective. Without intervention, the vulnerability of the global banana supply could lead to economic havoc in the agriculture and food industry. The most common solutions to this issue are genetic engineering and the development of a new disease resistant variety of the Cavendish. However, such solutions could replicate the root cause of the issue, monoculture itself.

The history of crop modification is a colorful and nuanced one that is still advancing today. From a glance at the neat rows of fruits and vegetables in the supermarket, it is difficult to discern the trial and error of selective breeding that resulted in the refreshing watermelon on your plate or the ongoing economic and legal debates about your corn. The produce that ends up in your grocery cart aren’t just the ingredients for your weekly meal prep, they’re also some food for thought about the art, industry, and science that has shaped and influenced them over the decades.