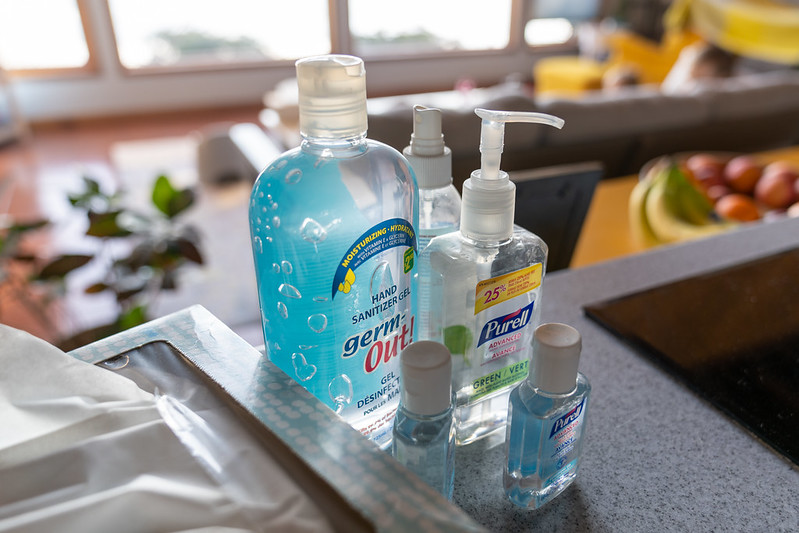 Even when we are alone, we are not actually alone. Rather, we are surrounded by trillions of bacteria that can survive on surfaces anywhere from a few hours to many days. As a result, many individuals rely on disinfecting products like hand-sanitizers, alcohol and Clorox wipes to save the day. Seeing the label “Kills 99.9% of Germs,” consumers assume these products make their surfaces germ-free. However, no one asks about the remaining 0.1%, the organismal residue left even after cleaning. This residue is known as endospores.

Endospores are produced by many bacteria as a way of storing genetic material until a more favorable environment is found. They are produced when bacteria face stressful environmental situations like high temperatures or chemical changes. Since the endospores can stay dormant and resistant to extreme environments, the bacterial colonies are able to multiply again when the environment improves. Essentially, the 0.1% residue that the cleaning product does not destroy can potentially give rise to the same bacteria that were present prior to the cleanse.

Diving into the inner workings of bacteria reveals that endospore formation is a complex, time-consuming process. According to the Department of Microbiology at Cornell University, when the environment becomes harsh, bacteria begin to form endospores by dividing asymmetrically and making two compartments. The genetic material is copied and placed in the smaller compartment that is the future endospore. After the endospore matures, the larger compartment—called the “mother cell”—undergoes programmed cell death. This way, although the bacterium dies off, the endospore gets to live on and wait for better environmental conditions.

This resilient nature of an endospore is partly due to its two layers of coating. The outer coat is a protein-rich sheath that gives the cell most of its resistance against chemicals and enzymes. Below the coat, there is a thick cortex composed of peptidoglycan—a tough layer of intertwined sugars and amino acids—that makes the endospore resistant to high temperatures. These layers and many other structures of the endospore protect the cell itself, and the genetic material and ribosomes of the bacterium are tucked away deep inside the core. To ensure resistance against high temperatures, both the core and the peptidoglycan layer are in a very dehydrated form. The immense dehydration gives the endospore the ability to withstand high temperatures and survive.

If we cannot destroy the endospores with disinfection, then what else can we do? Sterilization is one way to battle endospores and avoid any bacterial comeback. Although both disinfection and sterilization are types of decontamination, it is only the latter that can kill all endospores. According to the CDC, steam under pressure (autoclave), dry heat, and hydrogen gas plasma are some methods of proper sterilization. Although these are great techniques to use in hospitals and other medical and research facilities, this is undoubtedly a very inconvenient method for people at home. It is therefore very important not only to use disinfection methods, but also to use something as simple as soap. The amphipathicity of soap—the fact that its molecular structure has polar and nonpolar properties—allows for the complete removal of bacteria and endospores from one’s hands following a thorough wash. Even with the many disinfecting products currently available, it is important not to forego hand-washing. Especially in a time like this, when many people can be immunocompromised from other viruses and illnesses, it is imperative to minimize health risks that may come from bacterial endospores.