The Future of Science Education

We are living in a complicated era for education. With the new presidential administration, changing standards and curriculums, and many different attitudes toward the sciences across our nation, it’s hard to predict the future of science in our schools.

In the past, the common method of “raising standards” has been to teach higher level concepts at lower grade levels. I’ve grown up hearing constantly from parents and grandparents that concepts I was learning in science, mathematics, and technology had been taught to them as late as high school or college. This is partly due to the steady increase in technology as we progress into the future; my parents took typing classes in late high school and first learned basic computer skills in college, while I learned proper keyboard technique and standard computer programs like Word and Powerpoint in the first and second grades. Our grandparents struggle to understand the smartphones and tablets that today’s toddlers seem to intuitively handle. But teaching new discoveries in science and mathematics isn’t necessarily as simple as teaching students to use new forms of technology.

While there are national standards for science curriculums, they act as more of a guideline, leaving the states to interpret as they like. As such, science education isn’t equal from state to state, or even from school to school – and only in the case of public schools, as private schools follow their own personal standards. This means that students from states with lower standards could be at a serious disadvantage in pursuing a degree and eventual career in STEM. And that’s after considering that a poor introduction to science early on in life likely wouldn’t encourage most students to pursue the sciences further. 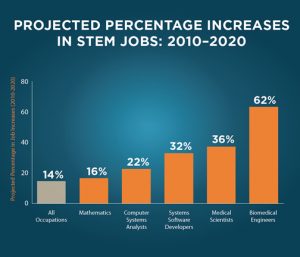 We’re seeing a significant increase in the amount of people pursuing jobs in STEM, which is already being felt by all of the students at UCSD with impacted majors. (Source)

I am of the belief that while we’re making progress in diversifying scientists and future scientists in the United States, factors like differing state standards and biases in early education still push certain students away from a future in STEM. Not only is it tragic to discourage young children from pursuing paths of learning that inspire them, but looking to the future of science, technology, and humanity, we need all of the creative minds that we can get. It is not in any of our best interests to miss out on potential colleagues based simply on their class, race, gender identity, or any other part of their background.

We need to create comprehensive standards that provide a stronger foundation for students who wish to pursue science professionally as well as an equally useful understanding for the average American. A better understanding of the sciences is becoming more and more necessary as our environment continues to be affected by pollution, man-made disasters, and the changing climate. Politicians and voters alike deserve to understand the implications of the legislature they create, as well as the problems we have yet to face.

As students at a public research university, we have a different perspective than many others. Many of us are unsure what to expect in the coming years in terms of new technology, accessibility of funding, legislature, research opportunities, and so on. Instead of collaborating with our fellow student, we see them as just a resume that might be longer or better than our own. But there’s also a good chance that they used to be a young kid who was wholeheartedly excited about building small robots, or studying the bugs in their backyard, or devouring books from the library about whatever they found interesting. Maybe they were encouraged, given small chemistry sets or build-your-own circuit boards – or maybe they weren’t, and they’re here in spite of teachers and family members who told them they weren’t smart enough or shouldn’t even bother trying to pursue an education in science. Or perhaps they were forced away from a love for the arts or humanities in favor of a high paying job in technical or medical sciences.

Current standards for K-12 schools – and to a degree, higher education as well – focus more on understanding and creating experiments and technical concepts rather than learning facts. To a degree, this is a good thing; experimental work is incredibly important, but every experiment starts with a question about the world around us. But in every upper division class I’ve taken so far, I’ve heard multiple questions asked about basic concepts, like the structure of DNA or how traits are inherited. How can we expect students to construct experiments about concepts that they don’t understand or find interesting? New standards need to provide students with ways to learn about the areas of study that interest them, whether they are anatomical, botanical, physical, mathematical, etc. so that students can find the questions they’d like to form experiments around. 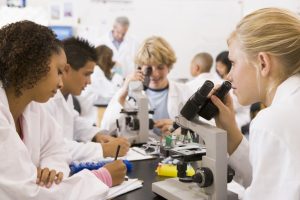 As the newest generation of scientists, it’s up to us more than anyone to stand together in support of our art, and to encourage the future scientists around us to love the world around them as much as we did when we were their age. I know I’d prefer to see a present and a future full of doctors who genuinely care about their patients, biologists working to keep our planet healthy, physicists discovering new mechanisms in the workings of our universe, engineers building further into the future, and so on: each scientist an artist working in their own medium. We’ve all seen the steady decline of support for the other arts in our education system, and it’s up to us to keep our own mediums alive and taught in the years to come.

Find some quick information about STEM education in the US here: