With the winter holidays in our recent past and Valentine’s Day just around the corner, ‘tis the season to splurge on food. Whether it’s the final remnants of your grandmother’s crisp peppermint bark or the indulgent heart-shaped chocolates that are lining the supermarket aisles, food is on all our radars at this time of year.

…But, so is nutrition. Health consciousness is currently at its height with the increasingly popular low-fat and low-carb diets. So, why, then, have the national obesity rates been on an upward trend? The truth is, while people may be counting their calories or limiting their intake of fat, the root of all evil remains unbeknownst to many: sugar.

The seemingly innocuous substance may well be the cause of numerous health defects, including diabetes, obesity, and organ damage. When sugar first enters the bloodstream via the pores of the small intestines, it travels to the liver, where a small portion is burned off to fuel bodily functions. The excess amounts of sugar are then converted into fat, some of which is stored in the liver, leading to potential weight gain and liver disease. This sugar-induced fat, known as triglycerides, hardens and clogs blood vessels, increasing the risk for hypertension and heart disease. Excessive sugar also leads to lower levels of high-density lipoprotein (HDL, or “good” cholesterol), further intensifying the threat of cardiovascular disease.

But it doesn’t just end there. Sugar can also result in hormonal imbalances. For example, the more sugar a person consumes, the more insulin that is released within his or her body. Insulin is a hormone produced by the pancreas that allows the body to convert blood glucose, or sugar, into energy. A surplus of sugar can cause an abundance of insulin in the body, eventually leading to a complete insulin resistance known as type 2 diabetes. As insulin also carries magnesium, a mineral that helps relax muscles, insulin resistance is linked with constricted blood vessels and high blood pressure as well.

In early November, the Food and Drug Administration (FDA) issued a recommended limit of 50 grams of sugar each day. Meanwhile, the World Health Organization advocates for 25 grams per day. In any case, both of these numbers bear little weight in comparison to the current average daily consumption of sugar in America — approximately 80 grams.

And this number is only getting higher with time, causing younger populations to be increasingly affected. “There is a definite trend towards an earlier diagnosis of diabetes type 2,” says Diane Peterson, a Certified Diabetes Educator and UC San Diego Diabetes Specialist.

Most health-conscious people restrict the amounts of desserts and candies they eat, and yet they still consume unexpectedly large amounts of sugar. So, where is it all coming from? To put it bluntly, sugar is everywhere, hidden in places we would least suspect.

For instance, fruits, especially when dried, contain loads of sugar. Smoothies and fruit juices carry even higher amounts, counteracting many of their widely marketed health benefits. However, due to the accompanying fiber, minerals, and nutrients in foods such as fruits, vegetables, and milk, natural sugars are always preferred to the additive sugars in processed foods. Flavored yogurt, granola bars, and cereals are exemplars of seemingly nutritious foods that contain much more sugar than we would expect. While health is a central concern for UCSD’s Housing, Dining, and Hospitality (HDH) services, a few of our own dining hall foods contain staggering amounts of sugar as well, as shown in the infographic below. 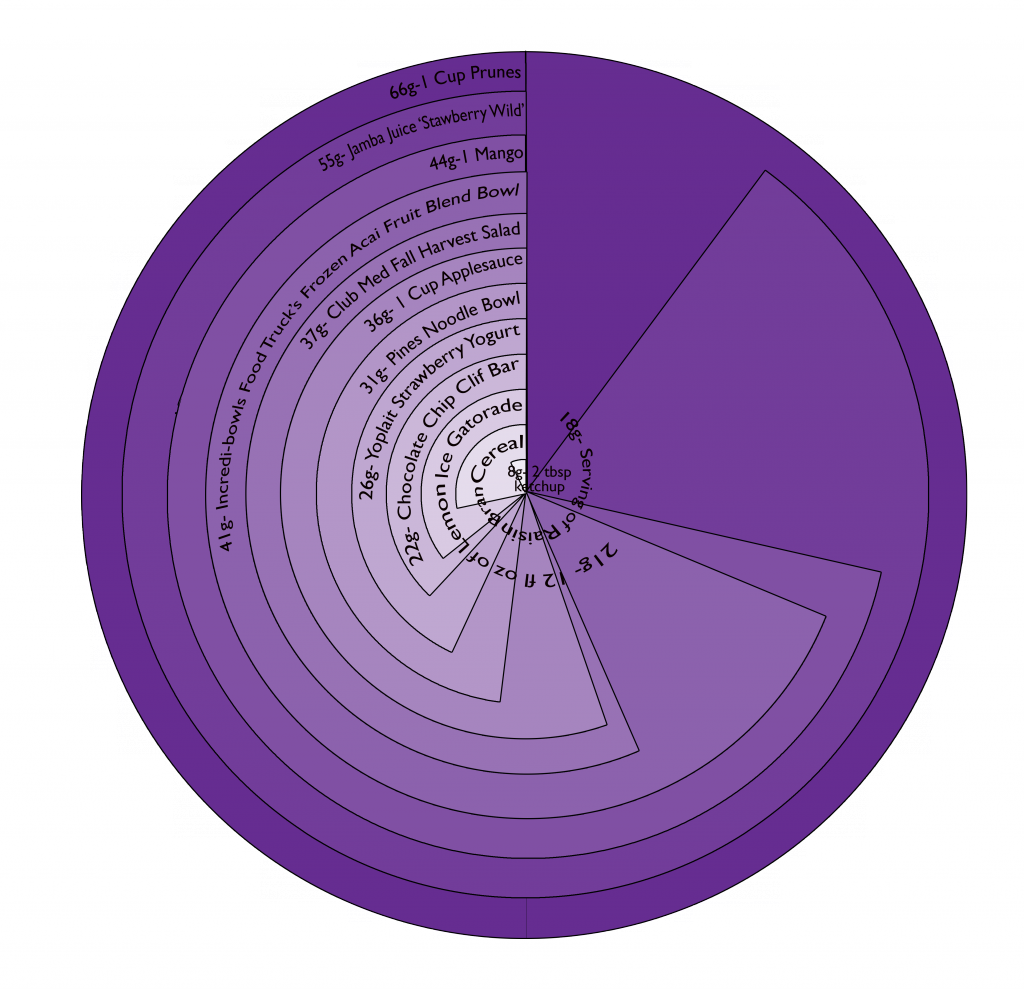 Now that we know sugar is creating a significant dietary problem in our world, how do we fix it? The first step is to keep track of our daily sugar intake. Read nutrition labels and keep a daily log of the amount of sugar you are consuming. Smartphone apps, such as Sugar Counter, can help make this process less grueling. Set a goal for yourself, and eventually work your way down to 50 grams or less if possible. Try to limit flavored and processed foods while sticking to small portions of natural sugars that accompany healthful vitamins and minerals. But don’t forget to treat yourself every once in a while. After all, a little sugar isn’t going to kill you; just make sure a little doesn’t become a lot.