Winnie the Pooh might not be as golly of a bear if he were to catch wind of the honeybee epidemic that is taking the US agriculture industry by storm. While this Colony Collapse Disorder (CCD) amongst bees was first noticed a decade ago, it has been increasing at alarming rates, and scientists remain puzzled by this enigma. CCD is a phenomenon where the adult bees abandon the colony and its queen, often resulting in reduced hive efficiency and the gradual death of the colony as a whole.  According to a survey conducted by the Bee Informed Partnership and Apiary Inspectors of America, beekeepers in the United States lost roughly 40% of their bee population within the past year. Even though the exact cause of this disorder remains unclear, researchers have identified several potential culprits, including a few pathogens and parasites, insecticides, and poor nutrition.

While the deaths of these pesky insects may be good news to the victims of their frightening stingers, honey bees actually have a tremendous impact on the consumer food market. A study by the US Department of Agriculture estimated that honeybees contribute more than $15 billion to the value of the country’s crops per year, and over 130 nutritious fruits and vegetables are cross pollinated by honey  bees. What seems to be an annoying little insect is actually responsible for pollinating a third of every bite of food we eat on a daily basis. With the rising number of deaths among honey bees, it is likely that the cost of a beekeeper’s pollination services will also skyrocket and effectively stimulate a similar heightened cost in the price of local produce. Not to mention, foods that we have come to love will become increasingly processed and scarce. Suddenly, an insect that you wanted to swat out of the air might just be saving you a couple bucks with every visit to the local grocery store.

In addition to playing a key role in the food chain, bees also fuel a large pollination industry that might be put in a position of risk as a result of this epidemic. Bee scientist from the University of Maryland Dennis van Engelsdorp reasons that while scientists are concerned with the looming extinction of bees, they are also worried that the commercial beekeeper won’t be able to stay in business. Among the last migratory farmers in America, beekeepers are losing a vast number of colonies annually, which poses a financial burden on their business and significantly reduces their pollination efficiency. What seemed to be just another insect fortuitously dying off is actually proving to have a substantial impact on the economic well-being of this nation.

So what exactly can we blame for this epidemic? Pathogens such as Nosema and parasites like the Varroa mites have been identified in hives suffering from CCD. Unfortunately, there is no direct correlation between the majority of reported CCD incidents and the discovery of these visitors. On the other hand, some 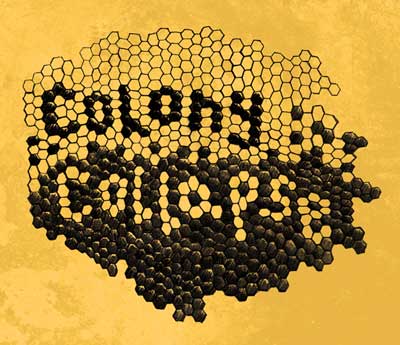 scientists are quick to blame large chemical manufacturing companies such as Monsanto, Dow, and Bayer for introducing insecticides that ultimately weaken the bees’ natural genetic defenses to fight off the pathogens and parasites. One of the more infamous insecticides, neonicotinoids, is known to cause acute and chronic poisoning in entire colonies and attack the central nervous system of bees. Once again, there is not a strong enough correlation to pin pesticides as the root cause of the problem, and experiments have shown that they are only lethal at incredulous experimental doses. Lastly, poor agricultural management in many areas that only grow one cash crop has reduced biodiversity, and thus reduced the opportunity for bees to pollinate. California’s extensive almond fields that rely heavily on pollination need to add more crops that will attract bees year-round if they still want routine visits from our black and yellow friends. It is likely that CCD is a result from a collection of these factors and that each cause is equally coterminous.

Among the countless efforts being taken to shed light on what is causing this CCD crisis, UC San Diego’s prestigious Nieh lab is on the frontier. Principal investigator James Nieh strives to develop a greater understanding of the foraging mechanisms of bees and what selective pressures have shaped the evolution of these mechanisms. In addition, the Nieh lab spends part of its time focusing on the effects the Nosema parasite has on honey bee health. Using different doses of the parasite, the lab examines the varying growth and development of honey bee larvae. The lab also looks into the effects of neonicotinoid pesticides: specifically, how bees are being exposed to the chemicals and how their willingness to forage is being affected.

So with all this said, what can the everyday human being do to keep a smile on Winnie’s face? For starters, one can try to improve honey bee survival by not using pesticides indiscriminately and avoiding products with chemicals like neonicotinoids. Apart from pesticide use, one can also keep pollinator-friendly plants in their backyards such as the red clover or foxglove to attract bees and provide greater biodiversity. Even the smallest steps towards helping honey bees survive may end up having a monumental impact on our ecosystem and economic well-being. Since this is a relatively new problem and scientists are still researching the root cause of the problem, it is essential to take every measure possible to help bee colonies prosper.