When I tell people that I spent my summer doing field research on great white sharks off the coast of South Africa, most people imagine me on the tiny boat from “Jaws” fending off a 12-meter shark in a crazed feeding frenzy. Others, thinking themselves above 1970s horror dramas, instead imagine me hanging off the side of a boat with a state-of-the-art high-definition camera to stick in megalodon’s mouth Ã  la Shark Week. The reality, however, was far from these sensationalized versions of “research.” While I was never forced to feed a shark sticks of dynamite to keep it from eating my boat, I was awed by these creatures that have captured the fascination of marine biologists and horror fanatics alike.

My internship consisted of shifts working on various research projects run by Oceans Research, a small organization based in Mossel Bay in the Western Cape of South Africa. On any given day, I might be out on a boat fishing for small benthic sharks on the rocky reefs that dot the bottom of the bay for a benthic population study in the morning, then spend the afternoon counting different kinds of limpets and barnacles in the tidal zone of a beach for an invertebrate population study. The next day, I might spend the morning at the tiny Mossel Bay aquarium doing a cognition and memory experiment on one of the cat sharks that calls the aquarium home and then spend the night on the boat, logging the movements of the Cape fur seals to and from their home on Seal Island. As interns, we had an opportunity to see what real scientific research is like and learn that field research isn’t all fun and games. Sometimes, it’s a full day of whale watching for marine mammal visual surveys with beautiful blue skies and a flat sea, but other times, it’s a full day in front of a computer entering data while torrential rainstorms make the swell too high to go out in our tiny research boat. 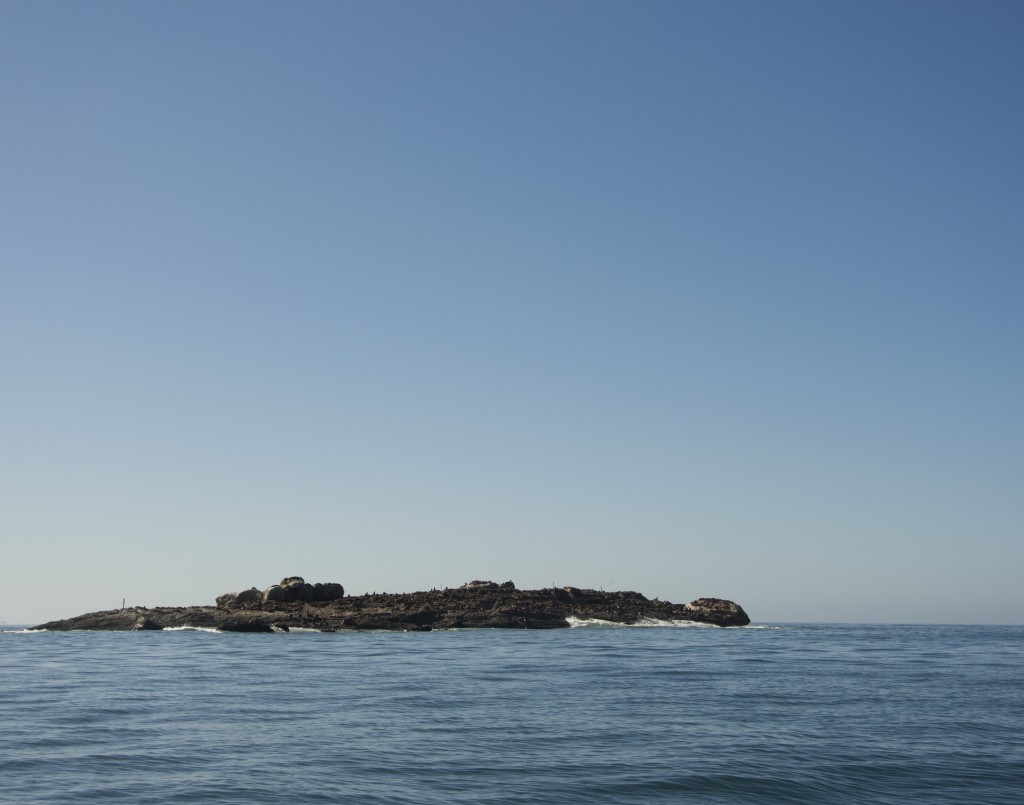 The highlights of my time, however, were the gross but aptly named “chum trips” that allowed face-to-face contact with the stars of Mossel Bay: the juvenile great white sharks. Our job as interns was to keep a record of which sharks were in the bay. Little is known about the life history of white sharks, and data is difficult to collect. By creating a database of where sharks are at what times, researchers can track the movements of the sharks both spatially and temporally. This will help us understand what these sharks do over their lifetimes and determine what measures are necessary to protect these important creatures. Currently, there is not enough data to determine whether white sharks are even endangered because there is no accurate count of current or past populations. Thus, it was our jobs as interns to collect data to add to this growing database, which will be accessible by shark scientists around the world.

On each chum trip, we set out with a stack of blank forms to record location, time spotted, and physical features and a camera to photograph the sharks’ dorsal fins. Each shark has a unique set of notches and markings that makes it identifiable, so we lured the sharks with a combination of chum and a bait rope and attempted to photograph them as they approached. This was no glamorous task. Chum is a disgusting stew of fish guts we had to mash up ourselves from blocks of frozen sardines, and it comes with a noxious stink that you can never really get out of your nose. We ladled it into the water cup by cup, forming an oil slick that spread a few meters around our boat and alerted the sharks to our presence, hopefully enticing them to check out our boat. Next came the bait rope, which had a giant tuna head on one end and an adrenaline-filled intern on the other, ready to yank it from the shark’s reach as it lunged. The word “disgusting” loses all meaning once you’ve stuck a metal stake through a tuna head from one eye socket to the other, but we did it willingly and excitedly, knowing that we would soon be visited by a curious and hungry shark. 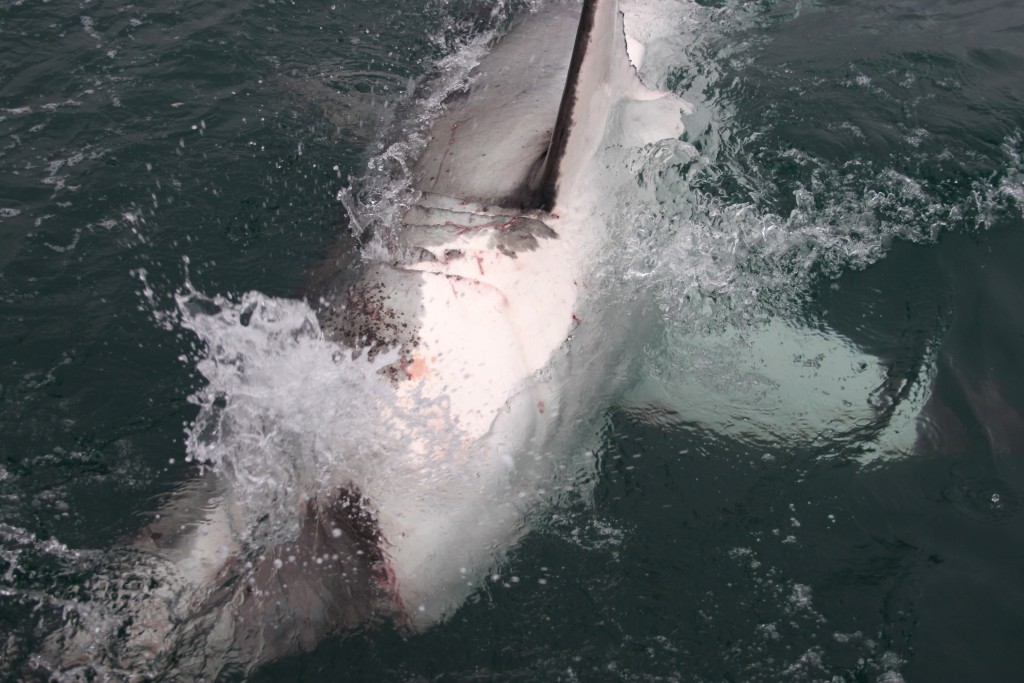 To get an idea of what it was like bait roping, imagine playing tug-of-war with your dog. Now, instead of a friendly Jack Russell Terrier, imagine your dog is a three-meter-long great white shark who could snap you in half in one bite. “Adrenaline rush” barely begins to cover it. It was terrifyingly fun, and gave me an intimate appreciation for sharks as apex predators acutely adapted to acquiring their next meal. In addition to feeling their brute strength, I could tell that behind every move, there was a calculating mind choosing each swish of the fin carefully. No mindless eating machines here – even when they breached the water in a fruitless attempt to steal our tuna head baits, not once did they seem to lose control or awareness of their actions. When the water visibility was good, they would surprise us by breaching from under the boat, where we couldn’t see them coming. When the visibility wasn’t good, they would take a brute-force approach and breach straight up from the deep, catching us unprepared.

As the weeks progressed, I became more and more familiar with the inhabitants of the bay. Each shark had its own personality – Rosie and Blackgill, named for their unique pigmentation, were known for bold breaches on the tuna head, whereas Taggie, named for a satellite tag deformation on her dorsal fin, preferred to swim by thoughtfully and only went for the bait when she suspected you weren’t paying attention. It was an amazing perspective, one you can’t get from watching Top 10 Most Dangerous Shark Bites on the Discovery Channel. I was repeatedly awed by their beauty, grace, and surprising calmness. Even when I had the opportunity to swim with them in a commercial cage dive, I didn’t feel any of the aggression they’re known for, only the peaceful calm of a creature that has remained mostly unchanged by evolution for millions of years. But that’s not to say they weren’t scary – despite being perfectly safe on a boat or behind the metal bars of the shark cage, you can feel their sheer power just by looking at them and know that this is not a creature you want to cross. 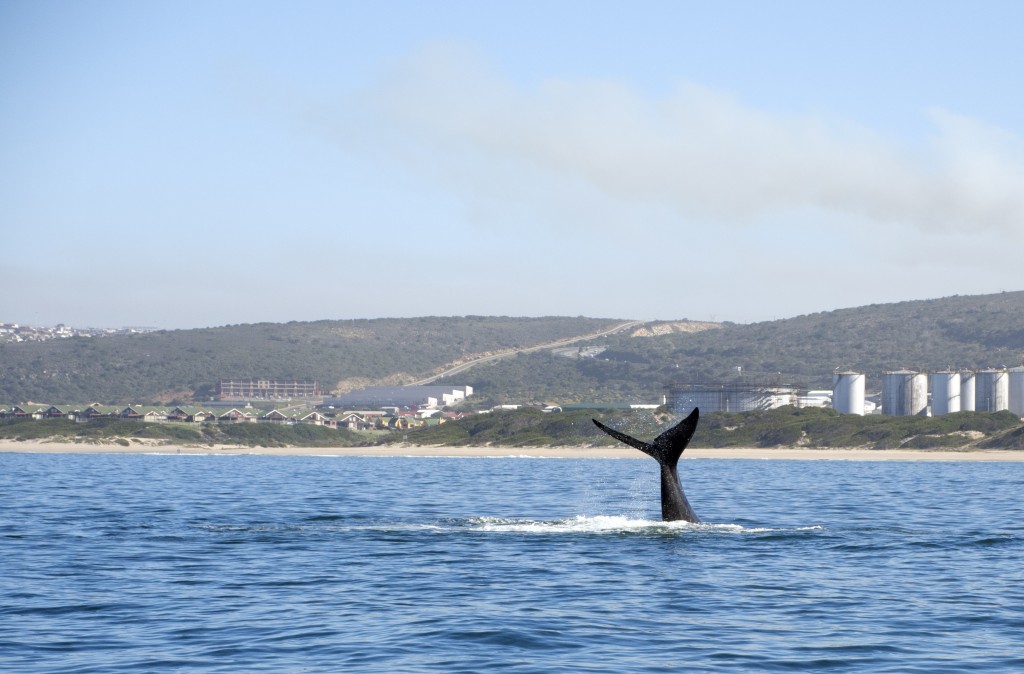 I read somewhere on the Internet that kids are fascinated by apex predators like T. rex, bears, and sharks because those creatures can eat us. To a small child, consumption is the greatest form of control, and control garners respect. I guess that makes sense – maybe the allure of studying one of the ocean’s greatest predators is the knowledge that in the water, a human doesn’t hold a candle to a white shark’s ability to control its environment. Studying white sharks reminds you of the ephemerality of life, such as in the case of the fates of countless Cape fur seals, but also its wonder. There are few times I’ve felt more alive than when on a boat surrounded by five circling white sharks circling, waiting for a turn at the bait rope. They’re majestic, beautiful, and powerful, demanding the utmost respect from humans intruding in their environment. I was lucky to have a chance to spend my summer with them, and it’s an experience I will never forget.