Antibiotic resistance: Are we heading back to pre-penicillin era? 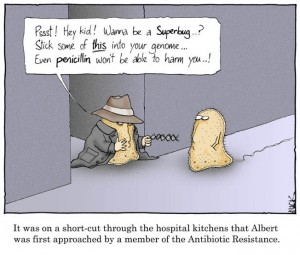 Contaminations are certainly not welcome by most scientists. However, there are a few exceptions, such as the fungal contamination on Alexander Fleming’s bacteria plate. This unwanted guest on Fleming’s plate led to one of the most important medical discoveries of the century—penicillin. Despite the initial success of antibiotics, bacteria evolved quickly and developed resistance against antibiotics.

Individual bacterium naturally has different resistance to antibiotics. This is similar to the height variation in human population; some people are taller while the others are shorter. In many cases, taking half the recommended dose of antibiotics is sufficient to wipe out most bacteria (Figure 1b.), and that is why people feel much better after taking just a few pills. However, if patients discontinue the treatment before all the bacteria are eliminated, the bacteria with higher resistance to penicillin will propagate and establish new populations with higher resistance (Figure 1c.). While it is relatively easy to kill a small amount of high-resistance bacteria, killing colonies of them is a much harder task.

Nine decades after the discovery of magical antibiotics, many bacteria had already developed multiple-drug resistance (e.g. MRSA, MDR tuberculosis). Rumor has it that we might soon go back to the pre-antibiotic era, when everyone died from diseases like tuberculosis and scarlet fever. We urgently need a reasonable solution. What are our potential candidates?

Alternative 1. Taking away their weapon

Our cells have membranes made up of two layers of lipid molecules (Figure 2b.) which isolate and allow the cell to maintain its internal environment. For bacteria to do any harm to the host cell, its toxins need to be able to get through this strictly controlled lipid bilayer. Therefore, bacteria toxins tend to stay close to the membrane, and hope to invade the cells once they have a chance. A group of scientists in the University of Bern made use of this property of bacterial toxin and artificially synthesized a structure, liposome (Figure 2a.), that is very similar to the cell membrane.  These liposomes, which have exceptionally high affinity to bacterial toxins, can be designed to hold compounds to neutralize toxins. When bacteria enter the environment that has both artificial liposome and host cells, the toxin secreted will all be attracted to the liposome. Liposomes will then neutralize the toxins. The harmful bacteria cannot do any harm to the host, and they will eventually be eliminated by the host’s immune system.

The best thing about this approach is that the bacteria will not develop resistance against this treatment because the treatment is not directly targeting the bacteria.

What if we switch our perspectives and try to attack the bacteria in our body instead of defending ourselves against them? A group of chemists in South Carolina had come up with an interesting approach to address this. Normally, multidrug resistant bacteria, such as MRSA, have more than one protective mechanism. The scientists created large molecules, named metallopolymers, that target both MRSA’s defensive enzymes and protective physical barriers, leaving MRSA susceptible to antibiotics.These metallopolymers are very effective in taking down bacterial defense mechanisms, but are found to have no effects on cells in the human body. They are safe to use and are potentially our weapon against multi-drug resistant bacteria.

Even though antibiotic resistance is already developed in multiple species, there are also some things that we can do to stop the situation from getting worse. First of all, do not use antibiotics unless your illness is caused by bacteria, and your doctor instructs you to do so. If you decided to start an antibiotic treatment, make sure you finish the whole prescribed course. Most importantly, we should maintain a healthy lifestyle so that our bodies will have  strong immune systems to defend against bacteria.