I’ve Had It With These Mako Sharks

In this mako shark genetic engineering and testing lab … I think his other line is better. Recently, I watched Django Unchained, which led me to Pulp Fiction and finally Deep Blue Sea. Samuel L. Jackson certainly mixes up his roles. So this movie, which is definitely not trying to rip off Jaws, is about three mako sharks secretly genetically engineered to have enlarged brains for experimentation, but instead the sharks use their superior intellect to shepherd the personnel through the facility.

Let’s start with the big brains. Would you look at that: sperm whales have brains 5.5x the size of our brains! Which makes sense; super-smart space whales are a common occurrence. Bigger brains do not necessarily mean smarter organisms (check out these big brains). Perhaps the ratio of body mass to brain size would be a better indicator of intelligence, but then doubling both body mass and brain size would not change the sharks’ intelligence. Furthermore, in humans, differences in brain size seem to have only a slight relationship with intelligence. 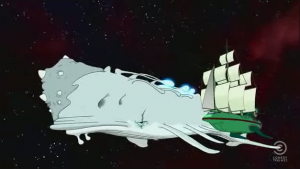 Why were the big fish with teeth necessary, you might wonder. The scientists in the movie were trying to harvest some naturally generated enzyme that’s a cure to Alzheimer’s disease! Presumably, this is based on the myth that sharks don’t get cancer (they absolutely do). Alzheimer’s disease is an incurable brain disease that slowly destroys memory and thinking skills, and it typically affects people over 65. In fact, five million Americans may have this disease, which is characterized by the spread of neurofibrillary tangles (tangled bundles of fibers) and amyloid plaques (abnormal clumps) in the brain. The abnormal deposits of proteins cause neurons to stop working efficiently, lose function, and die; too much neuronal death causes affected brain regions to shrink and cease functioning. Current treatments involve four medications approved by the FDA that do not prevent the problem but delay the inevitable by regulating neurotransmitters. Unexplained magic shark protein does not seem likely to cure Alzheimer’s.

At the end, the sharks are blown up, electrocuted, and blown up, in that order. The last shark, as smart as it may be, is lured away from escape by the head researcher jumping in the water, splashing about with blood. Wait a minute, human blood doesn’t attract sharks; Mythbusters tested that in their Shark Week episode! But while the Mythbusters love to test, they usually falter on their discussion. From what I’ve gathered, sharks like eating boneless fish and nice, blubbery sea mammals. People, however, have a high (for lack of a better term) meat to bone ratio, and I’d imagine a shark would rather have something that’d be easier on its digestion. All of that is my conjecture, however, and could be very promising for further research.