Because every year during Thanksgiving I don’t go home, I’ve decided to watch some Godzilla movies during this lovely four day weekend with campus services shut down.

First off: History. Gojira first terrorized Tokyo in Ishiro Honda’s 1954 film which, when translated, was presented to American audiences as 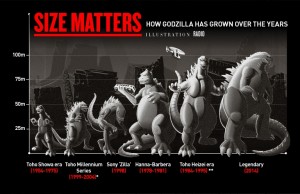 Godzilla, King of the Monsters! two years later. Gojira is a combination of the Japanese words for gorilla and whale. Gorilla-whale sounds dumb, so, since the official translation is Godzilla, I’m going to keep referring to the king of monsters as such. After decades of Godzilla played by men in monster suits stomping around model cities, American writer and director Roland Emmerich reimagined a CGI Godzilla terrorizing New York, and just this year Gareth Edwards had CGI Godzilla attacking attacking San Francisco.

Now culture corner. Godzilla originates out of post-World War II Japanese memories of the nuclear bombings of Hiroshima and Nagasaki as well as other Pacific tests. The power released by the splitting of an atom ended hundreds of thousands of lives and reduced two cities to rubble. Producer Tomoyuki Tanaka said “the theme of the film, from the beginning, was the terror of the bomb. Mankind had created the bomb, and now nature was going to take revenge on mankind.” Godzilla is the symbol of the danger and destruction that nuclear weapons present. It’s interesting how in the 21st century, Americans start making movies about nuclear-powered monsters on American soil. 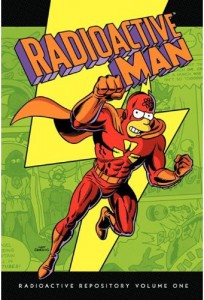 Nuclear-powered monsters? It’s called science fiction for a reason: nuclear radiation doesn’t tend to give out super powers… no matter what Marvel’s marketing division would have you believe. Personally, I’ve never understood what radiation actually does to you; I just knew radiation is scary.

Before talking about the effects of radiation on a living organism, where the heck do we get sources of radiation? Nuclear power plants right? A quick search on epa.gov tells us there are both natural and man-made radiation sources. Basically, radon comes from the soil and is actually the second leading cause of lung cancer. Radiation from space including UV and gamma radiation are mostly filtered by Earth’s atmosphere. Between thinning of the ozone layer and high energy gamma rays, we’re still barraged by rays so keep that sunblock on. Of course that extra area at the bottom of the periodic table of elements tends to have rather radioactive elements such as plutonium and uranium. Naturally occurring in the earth, we can find it in granite… such as the granite used to build Grand Central Station.

Of course the dawn of the atomic age has brought man-made radiation sources into our lives, such as xrays, every time you visit the dentist as well as nuclear power plants. Surprisingly, the EPA says half of the radiation you’re exposed to comes from medical sources! All this exposure is going to make me into a giant lizard or something, right?

The effects of radiation can be devastating, but, like all life, it all starts with changing chemical bonds. Ionizing radiation has enough energy to remove electrons from these bonds which causes them to break. Depending on where in the cell,  breaking a chemical bond can have drastically different significance; four basic things can happen. The cell can be undamaged when the bond broken is one that is normally broken, or the cell can be damaged but repair the damage and operate normally. The cell can die if the radiation is excessive since it is important to cell survival or reproductive ability, but the bigger concern is when cells are damaged, they attempt to repair, but they operate abnormally. Abnormal operation typically means changes in genome so that the effects are seen in the next generation or in a multitude of cancers, not giant lizard mutations. 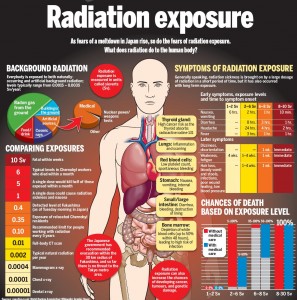 Sorry for the delay in posting last week, there was a mix up involving someone (it was me) deleting my blog. I hope you all had a good Thanksgiving and stayed away from radiation and Godzilla in all his forms.