Although I love the United States’ East Coast in the winter and autumn, spring is a whole different type of breathtaking. This is my first visit to West Virginia, and I am so glad I got to experience it during the season of rebirth. Everything is vibrant and green, everything. Well, maybe I’m being a little biased since I’ve been spending most of my time here near Stonewall Jackson Lake, where there’s a better chance that I’ll encounter bats among the forested rolling hills.

Anyone who loves animals knows that it is next to impossible to choose a favorite creature, and although that stands true with me as well, bats are my default favorite. They are the only mammal that flies (those so called “flying” squirrels merely glide). A lot of people think that bats are dirty, blind pests, but the truth is the complete opposite! Bats groom themselves quite often while they are roosting, and they can see as well as the average human can. Bats that eat fruit or nectar help pollinate plants while insectivores help keep bug (including mosquito) populations under control. An individual can eat half of its body weight in insects in one night! Their bad reputation is heavily fueled by the media and the fear of contracting rabies. Although some bats do carry rabies, the transmission rate to humans is really low. I confidently believe that bats do a thousand times more good than they do bad.

There are about 1,000 species of bats in the world, but the one I am looking for is one of the most abundant species in West Virginia, the little brown bat.

During the spring, these bats have separate day and night roosting sites, so I have to put my sleuthing skills on overdrive to find these little guys. When I say little, trust me, I mean it. I was at the Natural Science Museum in Roanoke two days ago, and they had an entire exhibit going on about bats. That’s where I saw how small the little brown bat is; its mass ranges from five to 14 grams. That’s less than two tablespoons of sugar! Their bodies are on average 3 ½ inches long.

The docent there told me that bats are really common in attics and abandoned buildings. I took his advice and spent that night online looking for abandoned spaces around town, and in the 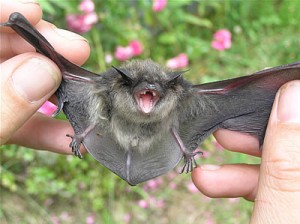 morning, I stopped by a few of the ones I had found. There were no bats in any of them. Now, I am back to my initial plan to venture into natural areas and look through trees, which are other possible roosting sites for these bats. Hopefully, my search will be more fruitful this time around!