Sliced bread may not be the only invention that has changed mankind’s perspective on layers. Recent breakthroughs in scientific methods have allowed researchers to study thin segments of the cerebral cortex, as pioneered by UCSD neuroscientist, Dr. Eric Courchesne. In a collaboration with the Allen Institute of Brain Science, Dr. Courchesne’s team harvested postmortem brain tissue from patients with autism and discovered that particular regions of the brain in the cortex had abnormal cell distributions consistent with autistic symptoms [1].

Autism spectrum disorder is a developmental disability that typically manifests itself in the first few years of a child’s life [2]. It is characterised by a wide range of symptoms and differing ranges of severity. These may include social challenges, communication difficulties, repetitive behaviors, or even medical disorders such as seizures or sleep dysfunction.Theories on how autism arises have shifted from a straightforward function of the environment to a complex mixture of environmental and genetic causes [1] but Dr. Courschene’s study points to a different factor: the importance of prenatal development. 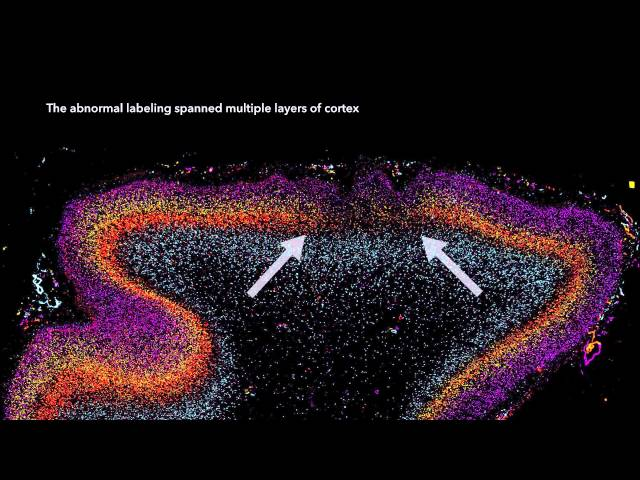 The bulk of the research was conducted by taking samples from various locations throughout the cortex. Each region of the cortex was sliced into thin layers to facilitate identification of particular types of cells, a technique that allowed for higher levels of detail. Researchers uncovered regions of abnormal cell distributions throughout the cortex, particularly in focal areas such as the frontal cortex. These regions contained clumps of cells, a characteristic unevenness that has been attributed as one of the causes for autistic symptoms [4].

These findings align with many of the treatments known for autism today, such as the belief that early treatment leads to a better prognosis, as neurons are more capable of rewiring correctly [2]. The spectrum nature of the disorder may also be the result of the varying patches found in the brain. Dr. Janet Lainhart of the University of Wisconsin commented that these findings support the theory that autism lies in faulty neuronal connections in the frontal region, as many of the patches in Dr. Courchesne’s study were concentrated particularly in that region [4]. It is estimated that these patches develop during the the second trimester of pregnancy, further supporting the prenatal theory for autism [2].

Dr. Courchesne’s study opens exciting new potentials for diagnosis and treatments. The next step would most likely focus on translating these findings into a clinical setting, a field that will open a variety of research opportunities for UCSD students interested in autism research. As techniques for early identification are finalized, autism may no longer be a disorder carrying such a heavy sentence. Now that would be a discovery greater than sliced bread!