Meet Your Baby Before Conception 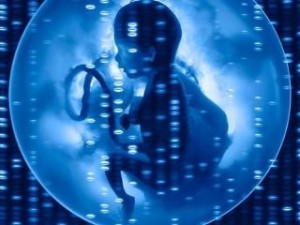 Researchers have developed a new tool to take the genomes of two separate human individuals and combine them to create a hypothetical embryo. No actual life is created and no physical embryo exists. This tool goes by the name of GenePeeks; there are plans to implement it in parts of the United States and make it available immediately to prospective mothers looking for sperm donors. This system uses multi-step analysis software to create thousands of virtual embryos by digitally combining a prospective mother’s DNA with the DNA of multiple prospective dads and eliminating combinations that lead to hypothetical babies with the highest risk of disease.

GenePeeks plans to use a Matchright online sperm catalogue system to help sperm bank recipient mothers choose sperm that is a better match for them, allowing them to create healthier babies. Prospective mothers receive a non-invasive DNA sample kit that can be used in the privacy of their own home; once they mail the kit back in, GenePeeks works together with the Matchright system to select optimal father donors based on DNA results. After using the non-invasive kit at home, prospective mothers send it back to the GenePeeks company who will analyze it and provide the future mother with an online registry of sperm donors that are the ‘lowest risk’ for her to procreate with. The mother is then able to scroll through the list of sperm donors from the privacy of her own home and choose the best option for her.

The idea for GenePeeks started with Anne Morriss. About six years ago, she was impregnated by donated sperm and gave birth to a baby boy. Morriss’ son was soon diagnosed with a condition known as Medium-chain acyl-coenzyme A dehydrogenase deficiency (MCADD).

MCADD is a disorder in which the affected individual lacks the enzyme responsible for converting fats into sugars. Individuals with MCADD cannot use the fats they eat for energy and this means that their body is likely to experience a metabolic crisis, which is a serious life threatening event. Although, Morriss and her son were lucky routine tests picked up the MCADD early on and were able to save her son, it is an ongoing condition.

Today, Morriss notes she always has emergency hospital bags near their door ready to grab just in case there is a MCADD related medical emergency. Morriss states that she had no known family history at all of this disorder and later discovered she was a silent carrier of the MCADD mutation; the sperm donation she received came from someone who also happened to be a carrier for MCADD. A silent carrier is someone who carries a recessive allele but does not display the disease and therefore may not know they are a carrier of the disease.

Lee M. Silver, Ph.D., co-founded GenePeeks along with Morriss. Dr. Silver acknowledges that everyone is a silent carrier of autosomal recessive genes but this only becomes a problem when one person has a child with someone else who is a carrier for the same autosomal recessive gene. The goal of GenePeeks is to eliminate this risk to mothers receiving sperm donations by using multi-analysis software to eliminate ‘risky’ sperm donors from the prospective mother’s Matchright catalog. The company hopes to expand to the general population and even world wide one day to help prevent the conception of children with deadly autosomal recessive diseases.