I’ve recently begun my bittersweet journey into the final season of Breaking Bad after the season 4 finale left my head spinning. As my freshman year of college winds down, so does my rollercoaster of a ride with this show, but unfortunately all good things must come to an end. If you still don’t know what this show is about, here’s a quick-and-dirty plot summary: overqualified and underpaid high school chemistry teacher Walter White gets diagnosed with cancer and begins cooking methamphetamine in order to pay his medical bills. 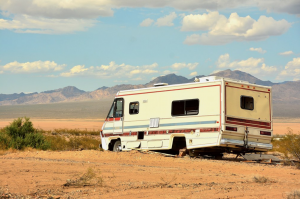 The infamous RV in which Walter began cooking meth. (Source)

Breaking Bad paints a painful and poignant picture of life in the drug business: despite Walter’s original intention to do “clean and easy” business as a meth cook, his involvement quickly got messy, affecting not only his livelihood but also those of his loved ones. However, the show focused more on the psychological effects of the drug industry rather than drug addiction. Walter White is an infamous methamphetamine cook yet he has never tried meth himself. We see countless instances of Jesse Pinkman (Walter’s former student and partner-in-literal-crime) using hard drugs and even attending a few AA meetings before relapsing, but he is never portrayed as a true addict within the scope of the show.

What ultimately does the most damage to Jesse’s relationships with friends and family is not his drug use, but his involvement in the drug business and his involvement with Walter. With that being said, I can’t help but wonder how the show’s focus might have shifted if Walter White drank his own Kool-Aid (incidentally, Walter’s signature meth was actually blue in color). As a chemist, he’s most likely aware of the psychological long-term damage caused by meth, and avoided it as a result. But how do these effects manifest biologically?

Interestingly, if we had some insight into Walter’s DNA, we may be able to predict whether he has a greater risk of addiction than the general population. Geneticists have been examining human DNA through genome-wide association studies (GWAS) as well as whole-genome sequencing (WGS) in order to determine whether our genetics play a role in susceptibility to drug addiction. GWAS associates marker genes with phenotypic data, while WGS surveys the entire genome using sequence data instead of markers. These methods study the DNA of populations to look for variations known as single nucleotide polymorphisms, or SNPs, where a single letter of the genetic code differs between two people (one with the disease/condition of interest, in this case addiction, and one without). SNPs appearing more frequently in people with the disease may directly affect disease risk, or, it may be a genetic marker for a different portion of the genome which does. 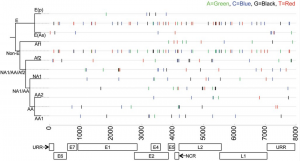 An example map of lineage-specific SNPs in a strain of HPV (human papillomavirus infection) and their positions within the genome. Tracing SNP locations provides insight into disease risk. (Source)

To test for possible genes influencing addiction risk, a group of international scientists measured smoking and alcohol behaviors, such as age when smoking or drinking began and number of cigarettes or drinks per day/week, as well as significant life events and physical conditions. Then, they correlated these results with specific genes thought to be involved in substance abuse. The researchers were able to identify over 400 locations within the genome that influenced smoking or alcohol use, and three gene locations associated with addiction were found in all of the 1.2 million participants studied. It’s still unclear exactly to what extent drug addiction may be hereditary, but we now understand that external factors (such as availability of drugs in the individual’s neighborhood or city) are not the only things influencing addiction risk.

Neurotransmitters never actually enter the receiving neurons—they simply bind to receptors on the surface. After binding, neurotransmitters are released back into the synaptic cleft, which is the space between the two neurons, and eventually meet their demise in a few different ways: some are broken up by enzymes in the synaptic cleft, and some re-enter the original messenger neuron for future use. An important mechanism by which meth becomes addictive is by blocking the reuptake of dopamine (known as the “feel-good” neurotransmitter) at the synapse, so that dopamine is unable to leave the synaptic cleft and instead continuously binds to its receptor. 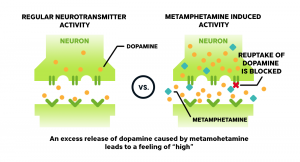 Methamphetamine specifically mimics the dopamine neurotransmitter in shape and size so that it can bind to dopamine receptors to signal for excessive release of dopamine. Heroin also signals for dopamine release by engaging in the brain’s natural opioid receptors and amplifying opioid receptor activity. Excessive release of dopamine produces an extreme euphoric feeling, referred to as the “high”. Over time, high concentrations of dopamine in the synapse damages nerve terminals by making receptors less sensitive to the presence of the neurotransmitter. Increased concentrations of meth are needed to replicate the same high, but due to the gradual desensitization of neuronal synapses, it becomes virtually impossible to replicate the same high experienced by a first-time meth user.

We still don’t fully understand what biological mechanisms lead a casual drug user to become an addict, who is physically unable to keep from using the drug despite consciously not wanting to consume it. So far, scientists widely believe that addiction stems from disruption in neuronal pathways associated with reward sensitivity, incentive motivation, and conditioning. For addicts, these physiological alterations in neuron signaling pathways make it such that drug use no longer becomes a choice, but rather a neuronal necessity.

Recovery is a long and windy road, well summed-up by Dr. Nora Volkow of the National Institute on Drug Addiction (NIDA): “As we understand the complexity of the human brain, it becomes very much of a magical thinking that one pill will solve the problem of addiction.” Currently, there are no FDA-approved treatments for meth addiction, but major progress was made in January of this year. A successful two-year clinical trial funded by NIDA provided patients with a combination of two existing medications, one for opioid addiction and the other being an antidepressant, and found that 13.4% of the experimental group were helped with their addiction compared to 2.5% of the placebo group. The success rate may seem low upon first glance, but this is a common number amongst brain disorder therapies.

Though it’s still unclear why the specific combination of these two drugs was effective, Dr. Volkow explained one possible theory. Naltrexone, which blocks opioid receptors, might work to mitigate the physiological meth cravings, while the antidepressant bupropion may reduce the emotional distress which accompanies sobriety for many addicts.

For those of us who don’t dabble in drugs, addiction may seem like a reality far-removed from our own. But does this mentality fail to recognize that the brain rewiring of addiction isn’t exclusive to drug abuse, but can apply to the things we engage with on a daily basis? When social media and caffeine addicts go cold-turkey, the withdrawal symptoms are eerily similar to those of other addicts. I certainly hope scientists will conduct more thorough studies on these “everyday addictions” within the next few decades, but only time will tell.

All I know for sure is that in an alternate universe where Walter White teaches CHEM 7L at UC San Diego, you and I are both getting front-row seats at every lecture.