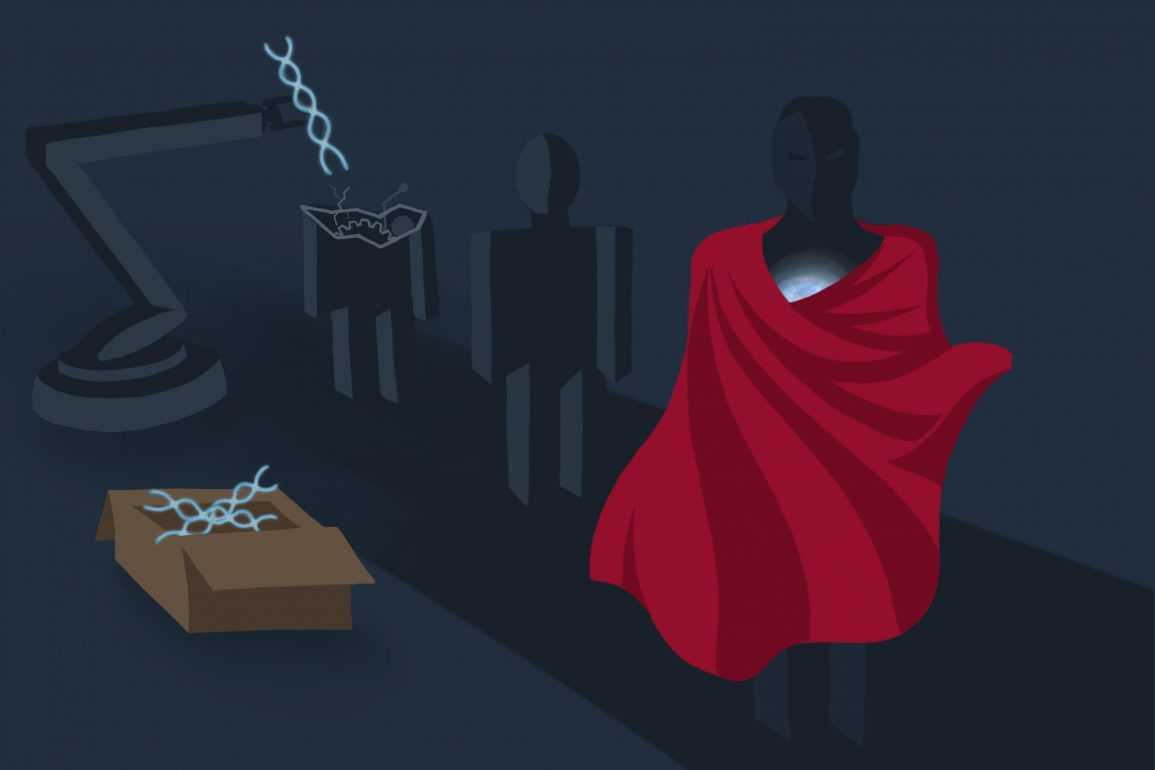 Full disclosure, I’ve never been a superhero movie buff. I watched Avengers: Endgame before I watched Avengers: Infinity War. I’ve seen Thor Ragnarok, but none of the other Thor movies. In the pre-pandemic era, superhero movies were primarily sources of social interaction for me; friends would ask me to accompany them to the theater to watch New Superhero Movie #7263 and I’d say yes, despite never having watched Superhero Movies #1-7262.

There’s something mesmerizing about the worldwide success of superhero stories. No matter how many times the same story is remade, every new film is an instant hit. At the end of the day, it’s escapism, but perhaps one of the most interesting aspects of superhero plotlines is the countless amount of “origin stories”: All it takes is a spider bite, a chemical spill, a burst of radiation, and suddenly normal humans can bend the rules of normal life. But what about the genetic superhumans, who’ve seemingly won the genetic lottery by receiving biological advantages through mutant DNA? What kinds of “superpowers” has mother nature already bestowed upon us, and is there a possibility in the future for translating big-screen superhero origin stories into real life?

While many mutations are visible through changes in one’s physical appearance or abilities, the origin of the mutation is hidden deep within the cell’s DNA, where genetic information is stored. These mutations can involve the deletion, insertion, or substitution of a nucleotide within the genetic code, altering the corresponding amino acid sequence. Proteins necessary for bodily function, such as those that aid in perceiving visual information,  are coded for by those specific sequences of nucleotides in our DNA. 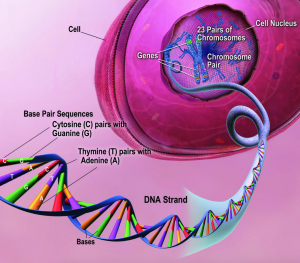 The double-helix shape of DNA is made up of two strands of nucleotides, which then pair according to their complement: cytosine pairs with guanine, and thymine pairs with adenine. (Source)

The most common type of mutation affects only a single base in our DNA sequence,  also known as a point mutation. A seemingly minor change in the genome can have devastating effects:  in patients with sickle cell anemia, a single base substitution from adenine to thymine leads to the production of the amino acid valine rather than the normal glutamine. This amino acid change causes  a red blood cell to become sickle-shaped, consequently making it unable to carry sufficient levels of oxygen to tissues and organs. Most mutations are deleterious, meaning they have a negative (and sometimes lethal) effect on our physical and cognitive functions. So, what are the chances that a mutation will actually be beneficial and grant some sort of superpower-like functional advantage?

According to a study conducted by Oxford researchers in 2014,  only 8.2% of human DNA is considered “functional”, meaning only 8.2% of DNA is important enough to normal human function to be evolutionarily conserved. In other studies, this number jumps to as low as 2%, meaning around 90-98% of our DNA is “non-coding”, or does not code for proteins. This doesn’t necessarily mean that non-coding DNA is useless—much of this non-coding DNA plays an important role in regulating when and where a gene should turn on or off, as well as how long certain genes should be expressed.

When we refer to DNA mutations that affect the organism in some way (good, netural, or bad), we’re largely referring to issues within the functional, coding DNA, which already make up a striking minority of our genome. Less than half of all mutations are considered “neutral” and do not have a particularly beneficial or detrimental effect on the organism. Some examples of these mutations would be blue eyes or red hair, and other neutral mutations may not even present phenotypically. According to Dr. David Plasteid at UNC Chapel Hill, out of the non-neutral mutations, 999/1000 are harmful. The chances of getting a beneficial mutation are so low, they’re comparable to the chances of receiving a delicious meal from Canyon Vista. So while this article focuses on beneficial mutations, it’s important to remember how rare these mutations actually are.

Different types of point mutations can have differing effects on the nucleotide sequence of DNA, thus influencing the proteins produced and altering gene expression. (Source)

Interestingly, there may be several different genetic mutations which could all grant an affected person the same unique “power”, a condition known as congenital insensitivity to pain (CIP), or the inability to feel pain. Patients with CIP experience pain insensitivity—in other words, a punch from Thor’s hammer would do the same physical damage in a CIP patient versus a non-CIP patient, but the CIP patient may not feel any pain at all.

A case report published in the UK in 2019 examined a case of CIP in a 66-year old woman from Scotland who was administered few pain-reducing drugs during her hand surgery and did not ingest a single painkiller after surgery, yet curiously reported 0/10 pain and was promptly discharged. Following intensive genetic sequencing, scientists discovered two mutations which both seemed to contribute to her strange, pain-insensitive phenotype. The first mutation was a single nucleotide change in a gene encoding for the FAAH enzyme, which breaks down a certain molecule known as anandamide (which elevates mood and reduces pain). A partial loss of function in FAAH functioning would mean an excess of anandamide in your body, causing a much more cheerful disposition and less pain sensitivity than normal. The second mutation was a small microdeletion of 8,131 base pairs further along the genome, in a pseudogene region: a sequence of DNA which has been mutated into an inactive form, yet resembles a functional gene. While this deletion is associated with pain insensitivity, the mechanism through which this is possible is still unclear.

Surprisingly, the first single-base change is quite common and appears in around one-quarter of the population. But this doesn’t mean that 25% of our population is pain-insensitive, though they might have a higher pain tolerance than others. The second mutation discovered in the woman is extremely rare; it’s the unique combination of both mutations which is believed to be responsible for her CIP. In a superhero world, though, CIP may not be such a great thing, since unbearable pain in a brutal fight against The Hulk wouldn’t signal you to surrender before lethal injury.

If you’re the type to choose flight over a fight with The Hulk, a certain mutation in ACTN3  (colloquially referred to as “a gene for speed”) would be advantageous. ACTN3 is a gene which codes for alpha-actinin-3, a protein with functions within the skeletal muscle fiber relating to faster muscle contraction. 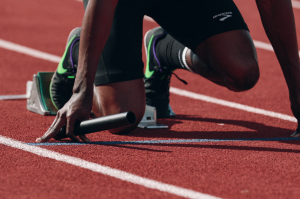 ACTN3 polymorphisms have been found to influence sprinting ability. (Source)

Most of us have a polymorphism in the genome known as R577X which alters ACTN3 function. Polymorphisms are deviations in DNA sequences which have become common enough within the population to no longer be considered a mutation, since the term mutation usually implies a certain rarity. The R577X polymorphism, in which a single base substitution from cytosine to thymine leads to the formation of a premature stop codon, occurs in 70% of the general population and leads to at least one copy of a loss-of-function allele for ACTN3 (this condition is abbreviated as ‘X’).

In homozygotes, or people who have two copies of this loss-of-function allele (XX), alpha-actinin-3 is completely absent in muscle fibers. On the other hand, homozygotes for the functional allele (RR) demonstrate an abundance of alpha-actinin-3 in muscle fibers, and various studies have shown that the homozygosity for the functional allele occurs in higher proportions amongst elite sprint/power athletes. Barry Allen’s super-speed didn’t arise from genotypic variations, but some athletes among us may be the closest to achieving Flash-like abilities.

While heroes such as Batman and Green Arrow weren’t given any supernatural powers by their creators, they were suspiciously good at saving the world at night while maintaining some semblance of a normal life during the day. If we had Batman or Green Arrow in real life, a mutation in the gene known as DEC2 may explain their night-owl behaviors. DEC2 is responsible for regulating our circadian rhythms, specifically by controlling the amount of the hormone orexin produced by our bodies. Orexin plays a vital role in keeping us awake, so this mutation in DEC2 leads to an overproduction of orexin and thus allows people with this mutation to feel well-rested on only four to six hours of sleep as opposed to the normal eight hours (yes, you do need eight hours of sleep to function properly; you’re not just “built different,” unless you have this mutation in which case you may literally be “built different”).

Genome-editing technology is becoming increasingly advanced, so we may all eventually get the chance to be “built different”. Just this past year, the leading scientists who developed the novel CRISPR/Cas9 technology (which function as “molecular scissors”) were awarded the Nobel Prize for Chemistry. By making precise modifications to DNA sequences, we may be able to “edit out” harmful genetic diseases, many of which currently have no cure. 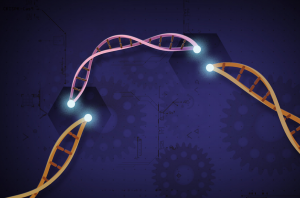 CRISPRs are specialized regions of  DNA, which the Cas9 enzyme can target and cut out of the genome. Scientists can delegate which DNA should be cut by attaching a CRISPR RNA guide strand to Cas9, which will lead the enzyme to a target gene. (Source)

But as Spider-Man might say, with great power comes great responsibility. If gene editing technology is unregulated, nothing would stop us from editing one’s DNA sequence in favor of some of these beneficial, ‘superpower’-like mutations. Like many other members of the scientific community, bioethicist Ronald Green of Dartmouth College claims that widespread gene editing is inevitable, and believes that “…it will become one of the central foci of our social debates later in this century and in the century beyond.”

It’s hard to imagine a Gattaca-esque society as anything but science fiction, but without any sort of regulation, humanity may misuse genome editing to grant “superpower” features to perfectly normal human beings. At the same time, technology such as CRISPR/Cas9 has the potential to save millions of lives worldwide and greatly improve overall quality of life. A daunting yet necessary task in the next few decades will be to strike the right balance. Maybe we should call up Thanos to keep things “perfectly balanced, as all things should be”.