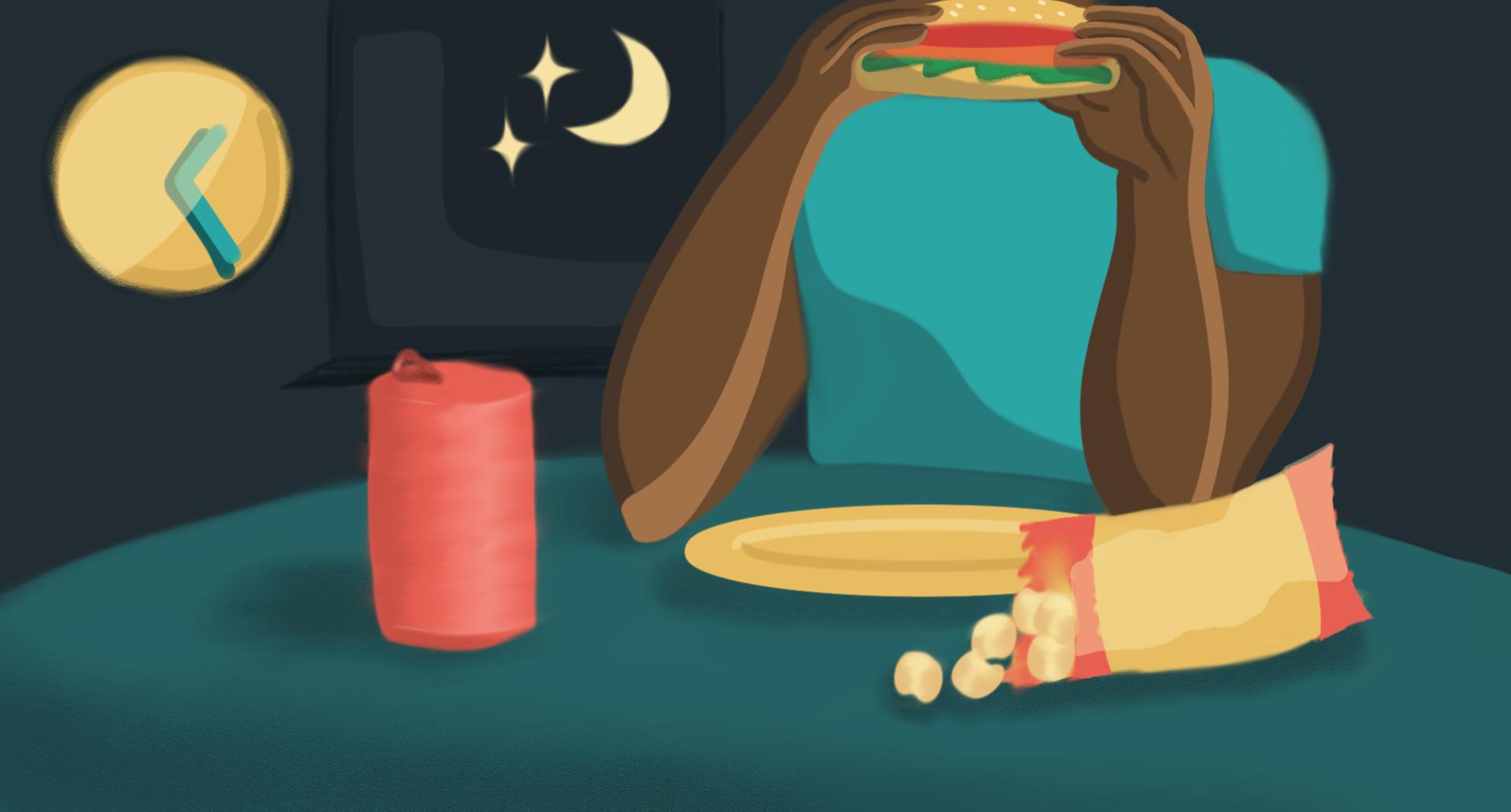 It’s midnight, again. Whether you find yourself studying into the night to catch up on class material, interrupting your sleep schedule to watch the latest episode of your favorite show, or staying up for absolutely no reason, at some point you might have found yourself standing in front of the refrigerator with one hand on the door and back hunched over, surveying your options for tonight’s midnight snack. Dinner was hours ago, but your body craves for more. You give in more often than you’d like to admit and maybe hope that you don’t get caught while stealing a bite. Or several.

Having an appetite at ungodly hours of the day can be attributed to many factors, including one’s usual eating habits, sleep patterns, stress levels, etc. However, appetite is seldom viewed through the lens of the trillions of microorganisms that reside in the human gut–the gut microbiota. Those who have studied the digestive system to any length may have heard of how gut microbes in the intestines help break down food and synthesize essential nutrients for the body. Knowledge of these gut microbes ends there for most people, but little do they realize that the gut microbiota is so much more than just our food metabolizer.

In addition to its influences on body weight and mental health, developing research suggests that the gut microbiota potentially plays a role in appetite regulation through a strategy called molecular mimicry. Through this strategy, certain gut microbes produce peptides with structures that might mimic those of major hormones that are responsible for appetite regulation. This suggests that our gut microbes may hold some responsibility for certain autoimmune and diet-related diseases.

Before delving into the details, it is important to get acquainted with some of the key players involved in regulating appetite. There are two main groups of chemical messengers: those that are orexigenic (appetite stimulants) and those that are anorexigenic (appetite suppressants). Ghrelin is an orexigenic hormone that is secreted from the stomach, and it signals the part of the brain called the hypothalamus to release two orexigenic neuropeptides called neuropeptide Y (NPY) and agouti-related peptide (AGRP). At this point, you start to feel hungry, and your stomach won’t stop growling (which can become an awkward ordeal when the class is quiet). Assuming the body responds and fills the stomach with food, ghrelin levels start to decrease and anorexigenic messengers enter the scene to suppress appetite.

One major anorexigenic messenger is leptin, a hormone that is produced by energy-storage cells called adipose cells (also known as fat cells). When the body senses that it has stored sufficient energy in adipose tissue, adipose cells release leptin which signals the hypothalamus to tell the body to stop eating. One way that leptin suppresses hunger is by signaling the hypothalamus to inhibit the formation and release of NPY, which is a hunger-inducing peptide. While leptin suppresses hunger, the small intestine secretes two other anorexigenic hormones called peptide YY (PYY) and cholecystokinin (CCK), both of which create a sense of fullness. From then on, the body pauses eating and enters a fasting state for the next several hours.

In a simplified homeostatic circuit for appetite regulation, the two starting hormones for stimulating and suppressing appetite are ghrelin and leptin respectively. However, a 2008 research study observed that certain gut microbes produce microbial peptides that contain sections of at least five consecutive amino acid sequences that are identical to the ones found in major appetite-regulating hormones like leptin, ghrelin, NPY, AGRP, PYY, and CCK. The significance of these identical fragments lies in how their structures can potentially resemble the ones found in appetite-regulating hormones. To give a visual example, let’s say the key to unleashing the hunger-inducing proteins (NPY and AGRP) is found only in ghrelin. Theoretically, unless this key is present, no other hormones can trigger the release of NPY and AGRP. However, the research study suggests that some microbial peptides are suspected to have keys that are identical or very similar to the key found in ghrelin, which creates a possibility for chemical messengers other than ghrelin to induce hunger. This structural similarity is known as molecular mimicry, and it is often observed in pathogens trying to slip past a host cell’s defense system, but scientists rarely considered the idea that the gut microbiota could also utilize this strategy. If such a mechanism does occur, it might enable microbial peptides, and thus gut microbes, to participate in appetite regulation.

Evidence that further supports this idea of gut microbes having a part in appetite regulation can be seen in how the microbial peptides of gut microbes are capable of influencing the amounts of autoantibodies targeting major appetite-regulating hormones.

What are these “bodies,” and why are they in our bodies, you might ask? Let’s briefly review the basics of the immune system.

Should the claim that gut microbes are capable of performing molecular mimicry be true, it could potentially help shed some light on certain eating-related health conditions such as leptin resistance, which is believed to be the main contributor to obesity. Recall how leptin is an anorexigenic hormone that originates from adipose cells and signals the brain to tell the body to stop eating. The more adipose cells there are, the more leptin is released. Obese individuals have plenty of adipose tissue and thus high levels of leptin, which should naturally stifle the need to eat, but the brain is unable to receive the leptin signal. Even though the body senses fullness, the brain thinks it is starving and tells the individual to continue eating. While the causes of leptin resistance are still unclear, perhaps the production of peptides with leptin-like structures by the gut microbiome could leave some clues to the reason behind why the brain ignores leptin signals in obese individuals.

If the molecular mimicry of gut microbes proves to have a role in appetite regulation, it would generate many new questions. Can gut microbes dictate when and how much we eat? Are gut microbes part of the reason why we sometimes have food cravings during ungodly hours of the night? Could gut microbes be the culprit behind certain eating disorders and autoimmune diseases? Perhaps we eat not because our bodies are lacking energy, but because our gut microbes are feeling extra gluttonous.

All illustrations drawn by Shae Galli