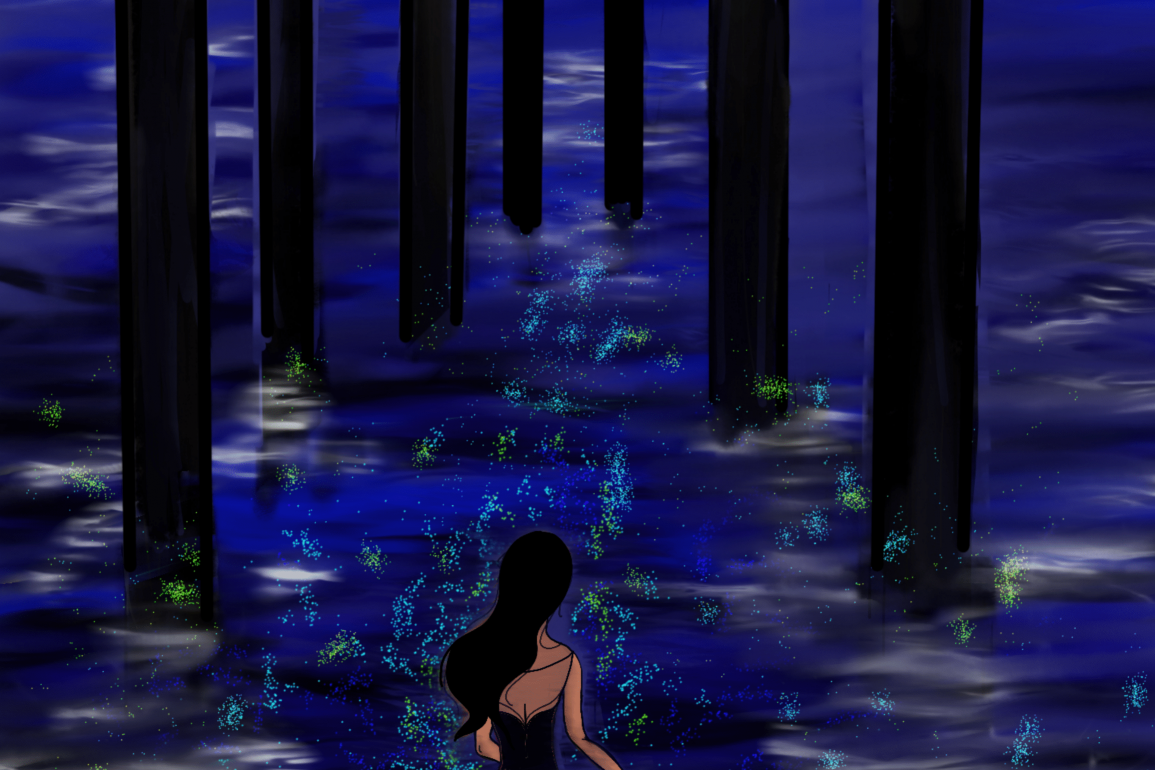 During the early summer nights, luminous blue and green hues light up La Jolla’s waters. This phenomenon, that has transformed the nighttime ocean into a captivating tourist destination, is the result of bioluminescence in a myriad of sea creatures. Bioluminescence, however, is more than just dazzling colors for us to gaze upon; in fact, this glowing sensation has evolved into existence through 40 different species. Exploring the scientific and evolutionary basis of this process can provide insight into its ubiquity.

Bioluminescence is defined as “a chemical reaction that produces light within an organism’s body.” Most organisms produce this light through the use of a catalyst called luciferase, which oxidizes the substrate luciferin. When the “activated” luciferin reaches and subsequently drops down from its excited state, an energy release in the form of light results in bioluminescence. One third of bioluminescent animals utilize molecules called photoproteins, which do not require the use of luciferase; instead, these photoproteins react with a small amount of a positive ion (such as calcium) to produce light. The most important characteristic of this light is its common blue-green visualization. In oceans, these colors have shorter wavelengths and can navigate through shallow or deep water. Alternatively, colors with longer wavelengths, such as orange or red, cannot make their way through water, which has resulted in the evolution of organisms that are unable to see those colors!

A variety of marine and land organisms utilize this technique. Dinoflagellates, plankton that produce their own luciferin and luciferase——and therefore their own bioluminescence—appear in the waves of La Jolla! Other marine animals even have a mutually beneficial relationship with bioluminescent bacteria. For instance, the Hawaiian Bobtail fish house bacteria in one of their organs; this symbiotic relationship has evolved due to the enriched environment that promotes survival of the bacteria and bioluminescent abilities of the fish. Furthermore, one of the most interesting land animals to display this trait is the Railroad worm from South America—alternating segments of its body glow red and green, which is exactly how it got its name! The vast range of species that possess the ability to light up in different ways reveals the ubiquity of bioluminescence. Understanding the evolutionary purpose of bioluminescence can provide insight into the true relevance of this trait.

All organisms have two evolutionary purposes—to survive and to reproduce. Most traits that become present in an organism’s biology or behavior promote these evolutionary goals and are passed down from one generation to the next. A few of the most prominent reasons for the existence of bioluminescence are mating, predator evasion, and hunting prey.

Mating is the primary method by which organisms pass down their genes, and evolution has refined bioluminescence as a useful technique to facilitate this process. Bioluminescent mating signals range from simply lighting up, as seen in fireflies, to traveling in circular patterns while emitting different lighting patterns, as displayed in the Odontosyllis Enopola, a marine fireworm. A type of crustacean even releases bioluminescent vomit to attract females! Such signals differentiate the sexes or indicate whether an organism is ready to mate. It is interesting to see that an idea as simple as light results in a vast range of signals for attracting mates. These observations begin to explain bioluminescence’s frequent occurrences.

Another purpose of bioluminescence is to provide organisms with defense from predators. Counterillumination, a form of camouflage, is a method of escape from the predator-luring silhouettes cast by prey that are caused by light shining through the water’s surface. Organisms use photophores on their body to emit the same wavelengths as the light that shines through the water in order to make themselves invisible. Some of the most common organisms to utilize this technique are the “benttooth bristlemouth, lanternfish, viperish, scaly dragonfish, krill, and squid.” Additionally, animals can use bioluminescence to distract their predators by flashing light and indicating their toxicity, or by releasing glowing liquid to escape. One of the most interesting examples of this is the Octopoteuthis deletron, a type of squid that, when in danger, can make its arms glow and release them from its body. These arms then attach onto the predator to distract it and lure in larger predators! Such organisms provide insight into why bioluminescence is evolutionarily beneficial for predator defense.

One more evolutionary advantage of glowing is with regards to hunting for prey. Predators can emit different lighting patterns that either confuse their prey or make it easier for predators to see their food. A fascinating example of this is the dragonfish, which can see and release red light to scavenge prey. The dragonfish has an evolutionary advantage, as most organisms cannot see the longer wavelengths of the color red in deeper waters. As a result, bioluminescence helps the dragonfish and other such sea creatures in finding sustenance.

Despite the seemingly simple nature of these glowing waves, bioluminescence and other such natural phenomena hold a much deeper purpose with regards to their origins, mechanisms, and functions. The countless organisms that display this trait in various ways reveal that an uncomplicated concept such as light can be manipulated towards evolutionary benefits. So the next time you see something as simple yet as  extraordinary as bioluminescence, understanding the reasons behind it may just reveal the deeper intricacies of science and this world.