Lyme Disease in a Nutshell 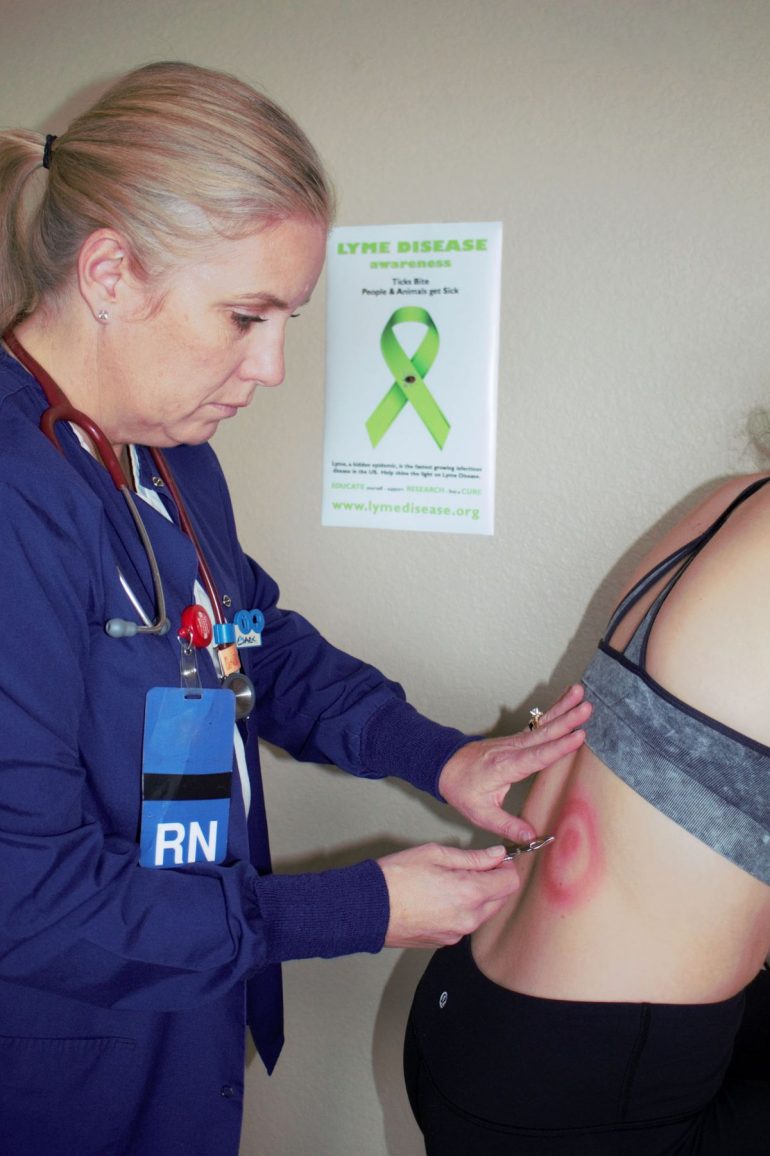 Imagine this. You’re a little tick egg, about to hatch. Your tick mom carries the bacteria that causes Lyme disease. But this bacteria is not transmitted from mom to child, so you will not be born a carrier. You’re just a harmless little larva, but not for long! Hunger gets the best of you. You spot a white-footed mouse scurrying by and jump on the opportunity for your first blood meal. You feast for about three to six days on your first hearty meal, not knowing that the mouse is infected with Borrelia burgdorferi, the bacteria that causes Lyme disease. What does this mean for you? Two things: For one, you will now molt and grow into a nymph within the next one to twelve months. And more importantly, you have now attained the status of being a vector, which means that the infected host (the mouse) has handed some Borrelia burgdorferi over to you.

Flash forward to a few months later: you are a hungry, infected nymph roaming the forest on your eight little nymph legs. You spot a large mammal and latch on to its limb. As you begin to feed, you are not only nourishing yourself but are also transmitting Borrelia burgdorferi to the mammal (host) through your salivary glands. After feeding for a day and a half, you’re finally full. But you see something moving a little further down the host’s limb. “Could that be another tick?,” you think to yourself. As you trek down the host’s limb, you find yourself interlocking eyes with another tick. A love story begins. You mate, lay eggs, grow old together for a few days, then die. In an alternative scenario, if you had not seen the love of your life on this host, you may have hopped off and found another host to infect the next (and probably last time) you were hungry. Either way, the large mammal host that you fed on has now been infected with Borrelia burgdorferi. Keep in mind the great number of possible “large mammal” hosts meandering in your forests. Of the many possibilities, your host could have been a large rodent, a deer, or even a human!

The complexity of this disease is further heightened by various controversies that surround it. Many of these controversies stem from the diagnosis of Lyme disease itself. In order to screen for Lyme disease, individuals are tested for antibodies against Borrelia burgdorferi. Since the antibodies are only produced in the presence of Borrelia burgdorferi, detection of antibodies would indicate infection. This method is sensitive in testing for Lyme disease during later stages; however, it is not as effective in detecting Lyme disease in earlier stages when the body has not yet produced antibodies against the pathogen. During early stages, Lyme disease symptoms include a characteristic rash and mild inflammatory symptoms. This stage can be treated within three weeks with the help of antibiotics. However, if left untreated, a more serious case of late Lyme disease can manifest with joint pain and significant neurological symptoms. If this stage is a result of a misdiagnosis due to a false negative and consequent neglect of symptoms, it is understandable why contention may arise. However, the most controversy surrounds a subset of Lyme disease called chronic Lyme disease.

Yet another controversy about Lyme disease has arisen from a conspiracy theory claiming that the disease was created by the US government intending for it to be a bioweapon. This claim surfaced in the mainstream media in July 2019 due to an amendment calling for the investigation of Lyme disease-harboring ticks as bioweapons. However, this theory has been debunked several times based on the history and nature of Lyme disease itself. Firstly, cases of Lyme disease have manifested in several places before it was formally discovered and given a name in a lab. If Lyme disease was actually a result of bio-weaponization, the cases would only have started after the pathogen was found in the lab. Furthermore, Lyme disease would make a very inefficient bioweapon due to its low lethality and its long incubation period (the amount of time it takes to be infected by the pathogen). Simply put, the biology of Lyme disease does not allow for it to be the swift killer that bioweapons strive to be.

One of the reasons this far-fetched conspiracy theory gained traction was because of the increasing number of Lyme disease cases throughout the United States. The real reason for the increase in Lyme disease diagnoses has nothing to do with bioweapons and everything to do with climate change and habitat destruction. The cycle of climate change feeds on habitat destruction and vice versa. This destructive cycle fuels itself and ultimately leads to lower biodiversity in areas that were previously biodiversity hotspots. As biodiversity declines, the role of the small number of species that can thrive in a particular harsh environment is amplified. For example, mice are one of these animals that excel at thriving in any area. However, the immune systems of mice are inadequate at attacking Borrelia burgdorferi, making mice likely candidates for infection. Conversely, opossums are animals that have an immune system more effective in fighting off Borrelia burgdorferi. This leads to a lower rate of Lyme disease infection among opossums compared to mice when bitten by an infected tick. Unfortunately, due to their requirement of a more niche habitat, opossums are less likely to thrive in habitats with lower biodiversity. Therefore, by decreasing the number of species less likely to be infected, lower biodiversity can allow for the propagation of Lyme disease. This phenomenon is known as the “dilution effect”.

In today’s world of decreasing biodiversity, the progression of Lyme disease is yet another reason for us to be mindful of climate change and its adverse effects on the environment. Despite how cool the life cycle of an infected tick is, or how interesting the controversies behind the disease are, Lyme disease inflicts great suffering on those affected by it. Now that we know the role of climate change in Lyme disease, let’s try not to tick off our planet more than we already have, shall we? For the sake of Lyme disease prevention.