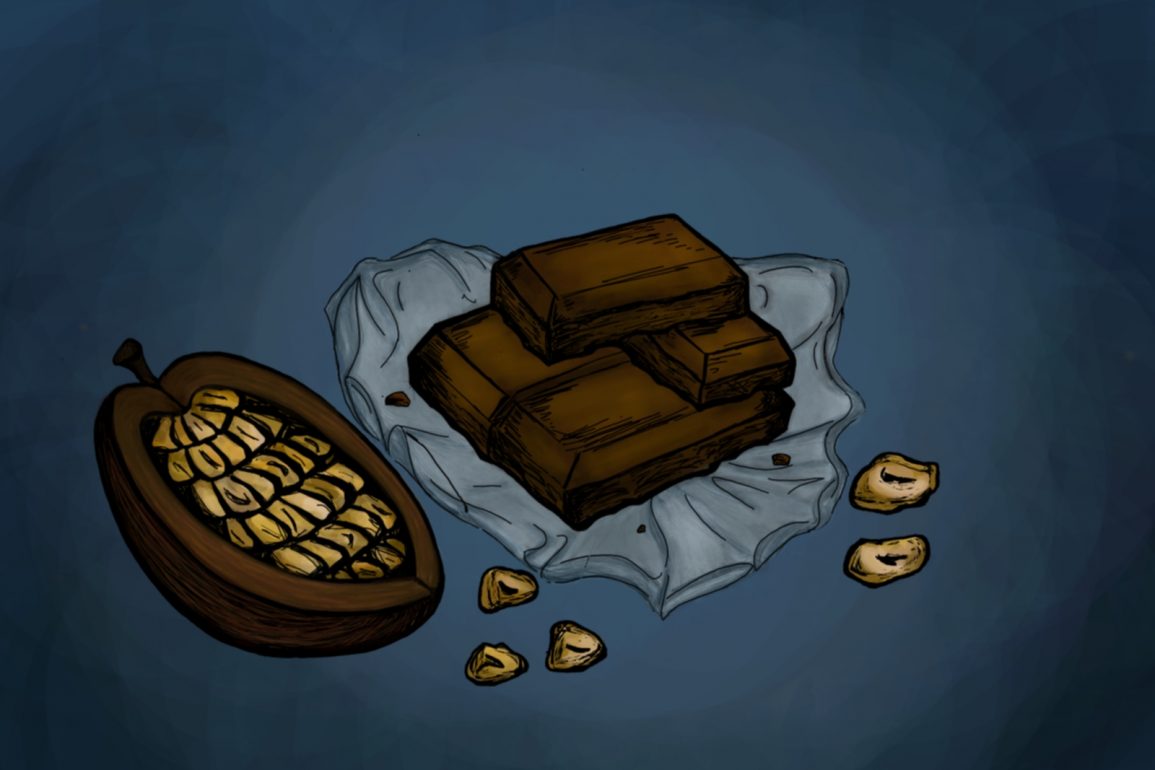 The Genetic Solution for Chocolate

Chocolate is a decadent snack and a beloved ingredient, available today in great amount and variety. However, recent reports predict that chocolate may disappear by 2050.

This forecast is directly related to the projected extinction of cacao trees, which are plants that produce the cocoa beans necessary for the production of chocolate.

The decline of the cacao tree population is buttressed by its requirement for a very specific habitat: cacao trees require a perpetually warm and humid climate that is only provided by regions 20 degrees north and 20 degrees south of the Equator. Currently, the vast majority of the world’s cocoa is produced in the countries of Ghana, Cote d’Ivoire, and Indonesia, all of which are experiencing the effects of climate change. Vast regions in these countries that were once hospitable to cacao tree growth are now disappearing due to warmer temperature trends and increasingly arid conditions. The temperature in all three countries is expected to increase 3.8°F by 2050, which will cause a considerable amount of liquid to escape from the soil, thereby leading to poorer crop quality.

This will have negative repercussions for the delicate cacao tree, which will inevitably suffer from these heightened temperatures as well as from excessive tropical pathogens. Both factors have placed the cacao tree on a rapid rate of decline, greatly reducing the global harvest of cocoa and chocolate production. A continued decrease in population will eventually lead to the extinction of the cacao tree, thereby ending the cocoa and chocolate industry that currently provides many jobs and careers worldwide.

To combat the decline of cacao trees, a novel genetic approach is currently being applied at the molecular level. This method uses a genetic engineering system known as CRISPR/Cas 9 (Clustered Regularly Interspaced Short Palindromic Repeats/Associated Protein 9), which has recently gained fame for its versatility. The gene editing mechanism relies first on foreign DNA that is inserted into the cell and digested by enzymes. Eventually, the DNA is incorporated into the cell’s genome. The now-cellular DNA is recognized by a specific single strand of RNA—a molecule used to produce proteins. This single-stranded RNA is attached to the digesting enzyme Cas 9 and guides it to the targeted DNA in the cell. Cas 9 then cuts the DNA at this location, often rendering the targeted gene nonfunctional, or unable to perform its duty for the host. CRISPR/Cas 9 is frequently used in this way to silence or knock out particular genes in an organism.

CRISPR/Cas 9 is currently being used by postdoctoral researchers at Pennsylvania State University to silence a particular gene called TcNPR3 (Non-Expressor of Pathogenesis-Related 3), which suppresses the defense response of cacao trees. The hope is that knocking out this gene will elevate the overall defenses of the cacao plant, providing it with increased resistance against its many natural pathogens.

The CRISPR/Cas 9 system was first put into action in cacao tree leaves that had been separated from the rest of the plant. Cas 9 successfully silenced 27 percent of TcNPR3 gene expression in these leaves, which were subsequently exposed to Phytopthera tropicalis, a prevalent pathogen of cacao trees. Upon infection, the modified leaves exhibited a greater resistance against disease, demonstrating that only a fraction of the TcNPR3 copies need to be silenced to produce this desired response. In order to further study this gene-altering phenomenon, CRISPR/Cas 9 has also been used to edit cacao embryo seeds (in a fashion similar to the method used in the isolated leaves) so that researchers can follow the heightened defense response throughout the lifetime of a cacao tree. This allows for a longer, more comprehensive study of the effects of CRISPR/Cas 9 on the cacao plant.

Research involving CRISPR and cacao is also occurring through a partnership between the UC Berkeley Plant Genomics Department and the Mars Chocolate Company. Cacao embryos with CRISPR/Cas 9-modified genomes have been created in order to enhance the weather resistance of the plant. It remains to be seen whether these seedlings will be able to withstand more arid conditions once they are fully-developed trees. The collaboration between UC Berkeley and Mars is part of the chocolate company’s attempt to reduce its carbon footprint and maintain the roughly 80,000 jobs that it provides.

The use of gene editing builds upon decades of research, innovation, and knowledge in a variety of scientific fields. The applications of such work now extend far beyond the realm of pure laboratory science, as exemplified by the wide-ranging abilities of the CRISPR/Cas 9 system. Though the methodology was created through biological research, its aim of increasing the standard of living for small scale growers by buttressing the diminishing cacao population extends into the social realm. This intersection of society and science is becoming more prevalent as technology continues to advance, which can be seen through the increasing amounts of cooperation between industry and laboratories. Today, this synergy and the innovation that it produces are being used to save the cacao industry, coveted both for its ability to provide jobs and for its end product.