I Got It From My Momma

It is not uncommon to hear “I got (insert trait here) from my dad”, or that so-and-so got the “good genes”. But in day-to-day conversations, we tend to misconstrue, and therefore misunderstand, the scientific meaning of heritability.

A biology textbook would define heritability as an assessment of how significantly genetics influences the variation of diseases or complex traits across generations. In other words, the components of phenotypic variation are genes and the environment, and heritability measures the proportion of the total phenotypic variance for a trait that can be accounted for by genes. Furthermore, all of these measures must be studied at the population level and cannot be assessed for individuals. So, as we start to dive into these technicalities, it becomes clear that there is a more complex dimensionality to heritability than the generalizations people often make.

One common generalization is the association of IQ with genetics; by analyzing this example, we can hopefully build a better understanding of how heritability operates for most other traits. When we consider heritability estimates, we must keep in mind that heritability in a population must be contextualized within its environment. For example, socioeconomic status is an important factor to consider when studying the heritability of IQ. This is where a lot of the misconceptions may arise.

To elucidate this topic, the Genetic and Developmental Psychiatry Centre at the Institute of Psychiatry in London analyzed relevant twin studies. Among their main findings were that the heritability of intelligence increases over one’s lifespan and that intelligence is correlated with education and socioeconomic status. The first claim essentially shows that the influence of genes in determining intelligence becomes greater over time. I personally found this finding hard to grasp. However, the paper explains a new concept called genetic amplification, which hypothesizes that at younger ages, the minor genetic differences among children are amplified by the wide variety of environmental factors changing around them, since “children select, modify and create environments correlated with their genetic propensities.” However, these environmental factors become less influential as individuals mature, and individuals’ phenotypes become more heavily determined by their genetic predispositions. 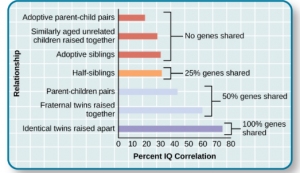 Correlation of genes and IQ among twins. Identical twins, sharing 100% of their genetic material, show the highest correlation of IQ, which demonstrates the genetic component of heritability. (Source)

Furthermore, epigenetics– changes in gene expression caused by the environment– may also play a role in how intelligence manifests itself phenotypically. These, unlike the aforementioned concept of amplification, are physical changes to DNA. Methylation, for example, decreases gene expression. Although further investigation is needed, epigenetic changes to a gene called DRD2 have been associated with differences in IQ. This is especially interesting because epigenetic changes can also be passed on to future generations.

All in all, the interplay of the environment and genetics is the key to producing phenotypes for all traits. So… “I got it from my momma” is only one part of the big picture.