Let’s Talk About Sex, Binary? A Discussion About Sex, Gender, and Biology

While many of us were taught growing up that sex and gender exist as binaries, the reality is far more complicated. Gender is very much a social construct, meaning it is a way that society chooses to organize its members based on arbitrary criteria. Gender essentialism is the idea that gender and sex are inherently tied together, and that a person of a particular sex will exhibit certain gendered characteristics, regardless of the environment. So when we do see differences between sexes, we begin to assign them to a biological binary too, saying that some physiological and genotypic traits “belong” to one sex or another. But there are clear gaps in the logic of such a separation based on “biology,” and these false social distinctions based on biased science can lead to tangible harm, both physical and mental.

What is the difference between “sex” and “gender”? Sociological studies have provided many definitions. Generally speaking, sex is defined as the “biological” difference between males and females, whereas gender is more of a “social” difference based on one’s perception of one’s self and/or their presentation of themselves to society. Gender is often perceived as a ratio of masculinity to femininity, with gender presentations other than those two forms considered outside our society’s traditional understanding of gender. In American society, there is a gender binary where it is assumed that certain traits are always and only associated with one sex, either male or female. An example of this is how physical strength is associated with masculinity, and therefore this trait is “unavailable” to females as a representation of femininity—females who demonstrate physical strength are seen as taking on a masculine characteristic rather than just portraying another version of femininity.

It is easy to see how this supposed binary is flawed, because every one of our personalities is an amalgamation of components of so-called “masculinity” and “femininity.” We have falsely categorized human traits in a dichotomy in an attempt to simplify our very complex world. But if we focus on the foundation used to explain this construction, we see that this elaborate social structure is based on the assumption of only two sexes: male and female. However, is there actually a biological basis to the perceived sex binary?

Even minor scrutiny is sufficient to negate the existence of a sex binary. This is because the biological parameters we choose to use to define gender are themselves socially defined and not all-encompassing. These parameters often include genitalia, sex chromosome combination, hormone ratios, and physical traits. Some people feel that their gender identity does not align with their biological sex, and will choose to be transgender, meaning they undergo a mental and/or physical transition to present themselves as the “other” gender and/or sex. Many people also fall in between what is defined as “male” and “female,” and label themselves as intersex. Chromosomes in particular are often held up as a biological validation of a difference between sexes. But, though it often seems as simple as XX or XY, minor complications with cell division and meiosis can often lead to a wide range of genotypes and phenotypes—and subsequently, an equally wide range of biological representations of sex. It is actually surprisingly common to have a phenotype that is not XX or XY—one in every 1,700 births may be XXX, XXY, a mosaic of XX and XY, or yet another genotype, with a variety of associated phenotypes (ISNA).

Other biological events can occur that impact one’s sex and gender. Professor Georgiann Davis, the author of Contesting Intersex, discusses her own experience of being intersex. She has complete androgen-insensitivity syndrome, meaning that despite having the genetic makeup of XY, her body is unable to use and respond to androgens. Androgens are male hormones produced by their testes that contribute to the development of male sex characteristics. Due to this condition, she has female sex characteristics, has a female body, and identifies as a woman. As we can see with Davis, as well as with the genotypes and phenotypes of many other intersex individuals, many biological events can bring about a wide diversity of genders.

What does it mean, then, if both biological sex and gender really are spectrums? It simply means there is a large range of sexes! Many, many people fall in between or outside of the binaries as they have currently been defined. Most importantly, we should recognize that both the sex and gender binaries are limiting and often stifling for both those who attempt to follow them and for those who are unable to. Rather than using incomplete, biased biology to uphold these separations, we should focus on making facts available and accessible to the public and giving people the agency they deserve in their own lives. For example, many transgender people, those who identify as a gender that does not “match” their sex assigned at birth, prefer gender pronouns that match the gender they identify as. However, it is incredibly difficult to change your gender in your records, such as on your driver’s license, in many states, especially with the constantly shifting requirements within and between states. This means that doctors and nurses continue to use the incorrect pronouns, as listed on patient records, which is very gender non-affirming for people who have struggled with their identity for their entire life. As a medical and scientific community, where the primary goal is to care for patients, medical professionals have a responsibility to ensure their patient has a safe and healthy experience within the healthcare industry, but this fairly common experience contradicts that expectation. 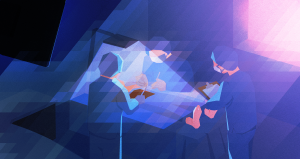 This question extends past just using the right words. Far too often, decisions about intersex kids are made without their consent. Professor Davis had her undescended testes surgically removed by doctors without her consent, which they did under the guise of “tumor removal.” She was not told what was happening, and only found out years later when looking through her own medical records—records that were buried deep in the hospital system. Doctors failed to obtain Professor Davis’ consent for this medically invasive surgery, and to this day, Professor Davis still suffers from the loss of all of the necessary hormones that her testes would have otherwise been able to produce for her. She has osteopenia, which is a condition of low bone mineral density that results in brittle bones. Her insensitivity to androgens contributes to it, and the removal of her testes may have exacerbated the effects. The surgery was psychologically scarring too, as Davis recounts the feeling of shame and loneliness she felt when she realized her doctors and her parents had hidden the truth about her body from her—as if it was something as “wrong” or “dangerous” as cancer. As aspiring scientists, medics, and healthcare professionals, we should consider this powerful patient testimonial, echoed by thousands of other intersex people around the world, and critique the choices of the medical professionals. Why was this choice made? There are concerns about a small chance of undescended testes becoming cancerous later in life. Or perhaps the surgery was done early to ensure that her body would be able to recover faster than it would at a later age. Professor Davis was a teenager at the time—most likely old enough to understand the situation and be capable of providing consent. This begs the question of why doctors withheld so much information from her.  Was the surgery truly out of concern for her health, or was it to ensure that she fit the sex binary as the doctors and her parents saw fit? Professor Davis’ experience is a powerful reminder of the importance of respecting every individual, and considering that similar experiences are shared but often kept silent by many of the intersex community, trans community, and gender-nonconforming community, it is vital that we all remember to listen when people do speak up.

As biologists, we already know that biology is messy. Math might always have an answer, physics might always have a proof, chemicals might have a rulebook. But biology shifts and varies and changes with the slightest of pressures—just shifting the oxygen content of the air can lead to exponential changes in the lifespan of a bacteria. It would be absurd for us to blindly believe in something as falsely clear-cut as a sex binary solely because we grew up with the idea—the scientific community thrives on questioning things, thinking critically, and providing scientific reasoning. It is important to stay open and accepting to new ideas, science, and experiences so that we can create a more cohesive understanding of our world, and realize that the world is better because of the diversity of the people within it.