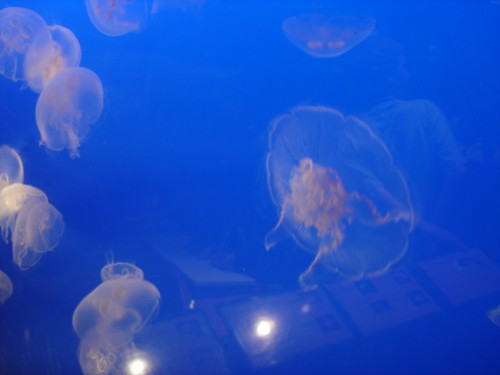 Over the Moon for Moon Jellies: What the First Sequenced Jellyfish Genome Has Already Told Us

One of the world’s oldest species has become a key player in one of the newest sciences. For the first time, the fully sequenced genome of a jellyfish species, Aurelia aurita — commonly known as the moon jelly — has been made available for in depth analyses. A team of researchers at UC Davis and the UC San Diego Kavli Institute for the Brain and Mind are co-leading the study. Still in its earliest stages, the project has already revealed a novel evolutionary mechanism that may be responsible for the survival prowess of the jellyfish. The project provides an explanation for how jellyfish became one of the first muscled swimmers in the ocean, and how they became the only members of their phyla to metamorphose from a stationary polyp to a swimming medusa, simply by turning on a few key genes.

Jellyfish have been vital organisms in ecological and evolutionary research since the founding of both fields. The term “jellyfish” encompasses a prolific and ancient

group of organisms under the phylum Cnidaria, one of the oldest phylums on the planet. Through genetic experiments in backtracking mutation rates to establish a molecular clock, researchers determined that jellyfish have existed for at least 500 million years, making them pre-Cambrian organisms that have survived more than half a dozen mass extinction events. In this capacity, jellyfish are a living link to the earliest stages of modern life. Jellyfish are also interesting because they have outlived other, similar organisms within Cnidaria. Marine biologists and evolutionary scientists hypothesize that their development of metamorphosis is what made them so capable of surviving extinctions and dominating ecological niches.

The metamorphosis itself is one of the most exhaustive processes seen in any organism on the planet, involving the biggest changes in major body systems. For this reason, jellyfish have been key organisms in projects studying development, plasticity, physiology, and gross anatomy. In particular, the earliest findings on the nervous system were derived from experiments conducted on jellyfish; they remain one of the most widely used animals in neuroscience projects. Ecologically, jellyfish are the keystone species in multiple interactions such as food webs. As such important creatures in multiple disciplines of biological research, it’s only natural that they would have a key role in the budding field of genomic science. The sequenced genome of the moon jelly has only just begun to be studied, and has already yielded promising results.

The most significant discovery from the analysis of the moon jelly genome is the genetic basis for the development of metamorphosis. Researchers at the Kavli Institute at UC San Diego have determined that metamorphosis was acquired with no significant mutations at all. Instead of the traditional mechanism of mutation followed by natural selection, moon jellyfish simply expressed a subset of pre-existing genes to transition between polyp and medusa. Surprisingly, a significant proportion of these genes are similar or identical to those found in humans and fruit flies. Since the last common ancestor between humans, fruit flies, and jellyfish existed even before the Cambrian explosion, this implies that the genes are very ancient, and have not significantly mutated in hundreds of millions of years. The moon jelly genome reveals that the jellyfish recruited a subset of existing developmental pathways and genes to result in metamorphosis, which molecularly is astonishingly simple. If accurate, this means that not a single meaningful mutation was required to evolve this trait, and that this complete overhaul of the jellyfish’s anatomy has no genetic complexity. This evolutionary pathway that bypasses mutations, and simply recruits a subset of existing genes to acquire such a complicated metamorphic process is a novel pathway that has only been seen rarely in other organisms, and never before in a macroscopic animal on the order of a jellyfish. Since the pathway does not require waiting for genes to evolve, it is likely why jellyfish were able to evolve rapidly, outpacing their Cnidarian relatives. The metamorphosis also allowed them to survive as other groups within the phylum died, and the rapid evolution permitted them to radiate out and occupy so many diverse, vacant niches in the marine environment.

The analysis of the moon jelly genome has only just begun to yield results like this. Many scientists predict that with a complete genetic understanding of the species and their metamorphosis, research into other animals’ metamorphoses will rapidly progress. Based on the extensive changes required to the jellyfish’s multiple organ systems, developmental biology studies will likely see advances in the near future as a result of the sequenced genome. Ecologically, jellyfish have become quite a problem, with prolific blooms of many species in areas where they are apex predators depleting the lower levels of the food web. Conservation efforts may use the newfound knowledge of jellyfish genetics against the species to restore balance. Interestingly, the ocean is rapidly returning to the conditions present in the pre-Cambrian era, when jellyfish first began to acquire metamorphosis. As some of the only organisms currently alive that existed in that period, jellyfish and their behavior can provide insights into the future of marine life.