Vaccination in the 21st Century

Vaccines are a complex innovation in disease prevention. Their widespread administration, both in the past and in contemporary society, has led to the eradication of diseases like smallpox and the near-eradication of ailments such as polio. Research into both existing and novel vaccines still takes place today, contributing to many fields including immunology and genetics. Advancements and developments in these areas of study make modern society safer than it was the past, with regard to life-threatening diseases. The majority of vaccines work to guard against such illnesses by copying specific attributes or components of the pathogen that causes disease. While this duplication may appear counter-intuitive, it is actually quite safe and serves as an effective means of producing an immune response in the body. This immune response can then provide lasting protection against the pathogen targeted by the vaccine.

Before delving deeper into how vaccines work, it is first paramount to discuss illnesses and the body’s natural defenses against them. In the beginning stages of an infection, an individual may become sick when exposed to harmful bacteria or viruses that enter the body and reproduce. In order to expel these microorganisms, the body’s immune system deploys several defensive mechanisms, including white blood cells that are specifically designed to fight infection. These cells can be subdivided into several unique types by function including macrophages, B-lymphocytes, and T-lymphocytes. Macrophages are relatively large cells that are able to break down both infected cells and the foreign invaders. B-lymphocytes, also known simply as B cells, secrete specific chemicals called antibodies in response to the germs. These antibodies are specific to the invading microorganism and bind to antigens, molecules on or secreted from the pathogen. Once an antibody binds to an antigen, the complex becomes the target of a specific cellular response such as degradation. In this way, antibodies identify antigens and alert the body to their presence. T-lymphocytes are the third type of white blood cell mentioned above and can be divided into multiple types. They are in charge of cell-mediated immunity, which includes diverse roles such as helping other immune cells mature and secreting chemicals that kill infected cells.

A vaccine utilizes the defensive mechanisms of the body to ensure immunity against specific pathogens. In most vaccines, a partial or weakened form of the harmful bacteria or virus is administered into the body. This causes B-lymphocytes to begin producing antibodies in response to the particular antigens. Once the germ has been overwhelmed or subdued, antibody production dies down and the body returns to normal. However, a mix of both T-cells and B-cells, known as memory cells, are retained by the body; these memory cells are then able to recognize the harmful microorganism as soon as it enters the body. This means that when the body is exposed to the same pathogen again after vaccination, T-cells immediately recognize it and help B-cells produce the specific antibodies to combat this invader. This rapid response prevents the individual from becoming sick from a pathogen he or she was already vaccinated against. By introducing conditions that make the body believe it is under attack, vaccines can actually produce a lifetime immune response to a particular microorganism. 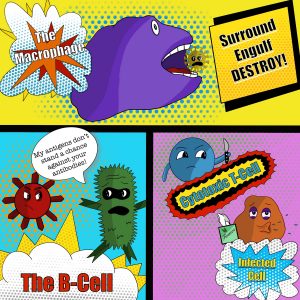 One common, but important, vaccine is the influenza vaccine. This vaccine protects against the illness colloquially known as “the flu” by targeting the influenza virus. Influenza vaccines utilize either attenuated or inactivated viruses depending on the formulation to elicit an immune response. Attenuated vaccines are more common and contain weakened but live microorganisms. These pathogens stimulate antibody production that will eventually create long-term immunity. Inactivated vaccines, like the flu shot, contain dead pathogens which confer an immunity that is not necessarily lifelong. This is primarily because inactivated viruses are unable to reproduce and multiply inside the body. As a result, they are more difficult for the host to detect and therefore harder to produce an immune response against. Often times, the first dosage of an inactivated vaccine generates little to no immunity. Additionally, the body may produce antibodies to regions of the virus that do not cause disease. This is an ineffective defense for the body as such antibodies do not safeguard against illness. In order to combat these obstacles, numerous administrations of inactivated vaccines, or ‘booster shots’ are often required to maintain or bolster a protective immune response.

This concept of multiple vaccinations is especially pertinent to the influenza vaccine, as the influenza virus exists in many varieties. While only the subgroups of influenza A and B are harmful to humans, these strains still contain extensive variability. Additionally, influenza viruses can change considerably from year to year due to a high mutation rate. This results from the influenza virus’ internal mechanisms, specifically the procedure surrounding its genome replication. Unlike humans, whose genetic material is stored in DNA, the influenza virus uses RNA for its genome. This RNA is replicated by RNA polymerase, an error-prone enzyme that lacks proofreading ability. Since there is no proofreading of replication, most replication mistakes or mutations are merely left in the genome, allowing the virus to evolve relatively rapidly. Any mutation that allows the influenza virus to circumvent immune defenses will be favored as such a mutation allows the virus to survive and replicate more successfully. An accumulation of such mutations, over the span of one year, essentially creates a new viral strain against which the previous year’s vaccine may be ineffective.

One particularly deadly influenza strain surfaced in 2009 and is known today as 2009 H1N1. This disease claimed 18,500 lives, but more recent estimates continue to push this figure upwards. H1N1 is a subtype of the influenza A virus and nine years ago, it happened to contain several genome segments from pigs. While 2009 H1N1 also had avian and human influenza viral components, many individuals came to colloquially dub it as the ‘Swine Flu”. Two vaccines were developed to combat the 2009 H1N1: a normal injection, or inactivated vaccine, and an intranasal spray, or live-attenuated vaccine. These particular vaccines were specifically designed to produce immunity to the 2009 H1N1 strain, and therefore conferred no immunity to influenza strains with sufficient antigenic differences. This illustrates the high level of specificity vaccines must have in order to effectively guard against infection, particularly in the case of a pathogen that mutates as rapidly as influenza does.

Currently, a new influenza vaccine is created every year, but research into a universal flu vaccine is underway. It is often difficult to determine which particular influenza strains will be prominent each year and consequently, annual flu vaccines are not always helpful in preventing infection. Current influenza vaccines target the head of a specific protein called hemagglutinin, which is located on the surface of the virus. Upon exposure to hemagglutinin, the body will produce specific antibodies that protect against future infections of that particular influenza virus. However, since the head of hemagglutinin is a prominent target for the immune system, it tends to accumulate mutations and evolve quickly. In order to create a universal flu vaccine that remains constant throughout the years, a different protein with a slower mutation rate than the hemagglutinin head should be targeted. Researchers have identified several different viral proteins that mutate at slower rates, including the stem region of hemagglutinin, the portion of the protein that attaches the hemagglutinin to the viral surface. This particular region is unchanged across many different strains of influenza; as a result, a vaccine targeting this stem region may be effective against a wide variety of influenza viruses, for much longer than one year. This is a viable alternative to an annual influenza vaccine and is one of the many current avenues of research on influenza vaccination.

While the influenza virus and vaccine are well-known, the disease of meningococcal meningitis and its accompanying vaccine are not as familiar. Meningitis is an infection in the linings of the brain and spinal cord that can be fatal. Infection produces inflammation which can appear suddenly, in acute cases, or gradually, in subacute manifestations. Common symptoms include fever, confusion, a stiff neck, and sensitivity to light. It is contracted exclusively by humans, mainly through contact with respiratory fluids. The first meningitis vaccine, known as MPSV4, was created from the polysaccharide coating of the bacteria and was approved for public use in 1978. It contains only the antigens of the meningococcus bacterium, meaning the vaccine produces an immune response tailored to specific antigens of the pathogen.

Today, however, this vaccine is used as an alternative because of a new conjugate meningitis vaccine, created in 2005. This conjugate vaccine produces a decrease in carriage or the carrying of infectious agents without actually becoming sick. All vaccinated individuals are carriers of pathogens until they are subdued; however, the meningitis conjugate vaccine reduces the amount of people carrying the harmful bacteria. Lower carriage rates can decrease the amount of non-vaccinated individuals who will contract the disease. Consequently, the conjugate vaccine protects not only individuals who receive the administration but also those who do not become vaccinated. Much like the original polysaccharide vaccine, this conjugate variety also provides immunity against particular regions of an invading microorganism; thus these two vaccines work to defend the host in similar fashions. Called MCV4, the newer conjugate vaccine is administered in two doses, about five years apart, and is recommended for children, teens, and young adults. This is a one of many vaccines that is available to children today, but did not exist for their parents. This showcases the rapid advancement of vaccines, well into the 21st century.

In brief, the mechanisms of vaccines are both complex and fascinating with great potential for future improvement. From attempting to create a universal vaccine in the case of influenza, to formulating a new variation of an existing vaccine, in the example of meningitis, vaccines continue to propel medicine forward and provide significant benefits to society. Their perpetual development allows for continual widespread protection against harmful bacteria and viruses. Furthermore, a highly vaccinated society also protects individuals who are unable to receive vaccines for special reasons like health or age. A community with a high level of vaccination has ‘herd immunity’, meaning that because a high proportion of the population is immune to a disease, it is rarely contracted within that society. Consequently, individuals who are not vaccinated have minimal to no exposure to the pathogen and are unlikely to become infected by it. Even indirectly, vaccines protect individuals and promote the overall well-being of a society.