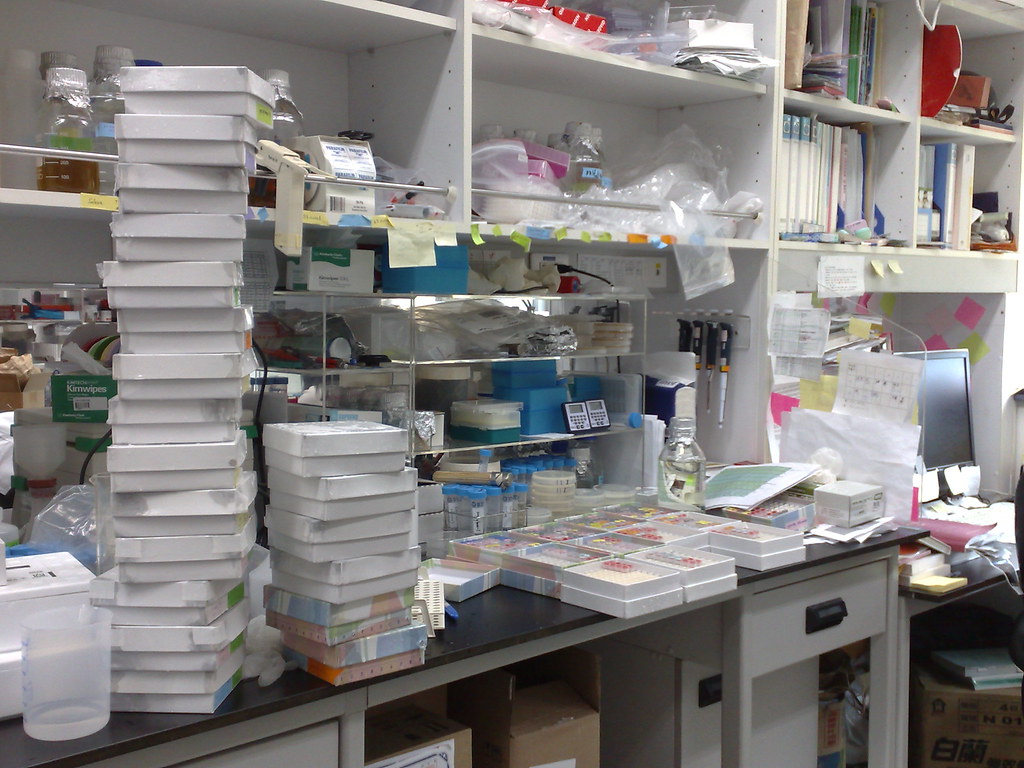 A Glimpse into the Struggles of Women in Science

A couple weeks ago, I found myself looking up the lab website of Aviv Regev, an up-and-coming computational biologist running a successful lab at the Broad Institute of MIT and Harvard. She is one of the pioneers of single-cell genomics, the co-chair of the organizing committee of the international Human Cell Atlas project, and an all-around phenomenal scientist. As I was typing “aviv regev [sic]” into the Google Search bar, the first suggestion that popped up was, to my dismay, “aviv regev [sic] husband”. I brought this to the attention to a few of my labmates and found that this is common among almost every prominent, young, successful female. People want to know if they’re married or not. I felt a mix of anger, frustration, desperation, and disappointment. 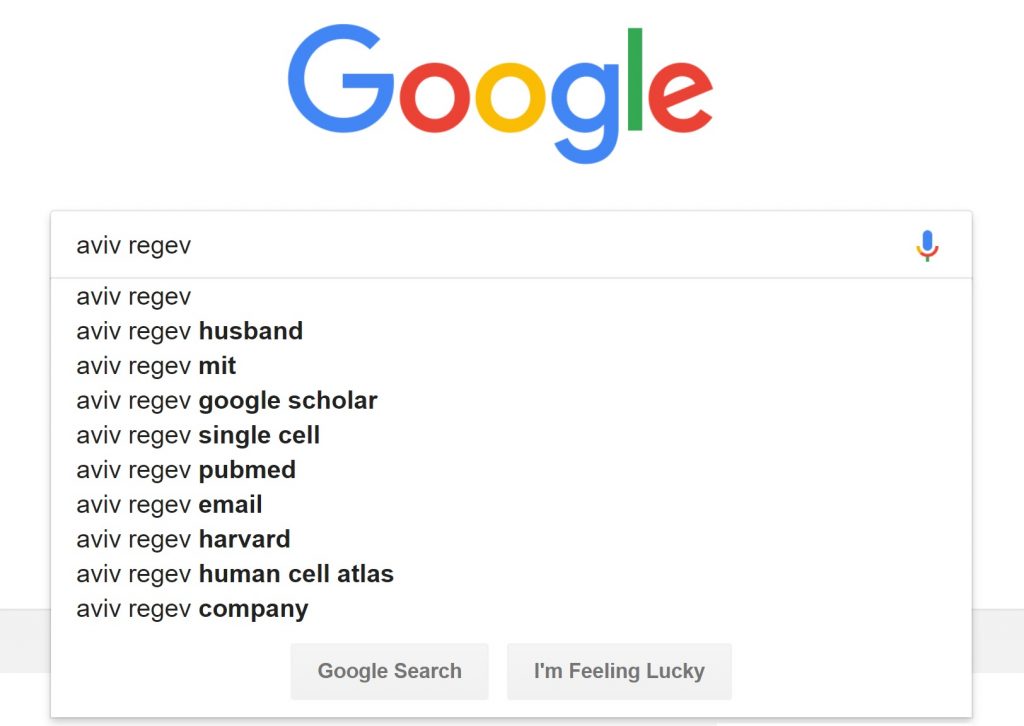 Why do people seem to care more about her marital status than they do about the incredible science that she does?

Oftentimes we assume that the scientific community—consisting of innovative and open-minded people—is also open-minded and progressive when it comes to feminism and women in the workplace. Women in science, however, are still forced to overcome many challenges when pursuing careers in academia and industry. These obstacles include wage inequality, lack of representation, pregnancy discrimination, stigma, sexual harassment, and more. In this day and age, we would all like to believe that sexism is no longer a problem. But rather than brushing sexism off as old history, we should consider what needs to be done to truly reach that ideal lack of discrimination—because we are not there yet. It’s vital that we create communities where women can thrive as members of society and as scientists. The amount of time and energy wasted tiptoeing around sexism is so much better spent elsewhere; we should instead cultivate environments where everyone has the opportunity to contribute to creative and innovative science.

Gender inequality—globally and in science—has been a long-standing issue, but where do we stand today? To begin with, general stigma against girls studying science often discourages them from pursuing their interests and curiosities. The resulting lack of representation and implicit bias against women is increasingly prominent as you move up the career hierarchy, and the general trend we see is that men occupy the most prominent and powerful positions in science. In “Why more women don’t win science Nobels,” Mary K. Feeney writes, “implicit bias can work against women’s hiring, advancement and recognition of their work…[and] can affect women’s ability to publish research findings.” Additionally, within the workplace, women are still expected to prioritize building a family over building their career in science, as though women’s lives are not complete or fulfilled without motherhood—the underlying assumption being that the men in their lives will not contribute an equal amount of effort into child-rearing and family building. There are many other studies, articles, books, and discussions on the struggles of women in science (such as Angela Saini’s Inferior: How Science Got Women Wrong—and the New Research That’s Rewriting the Story). One of the most pressing issues in the scientific community, however, is sexual harassment.

Sexual harassment and assault have been hot topics in the national news, especially with Brett Kavanaugh’s recent confirmation into the Supreme Court and the release of the documentary series “Surviving R. Kelly,” but these issues permeate our local scientific community as well. Right next door to UC San Diego at the Salk Institute for Biological Studies, the prominent cancer scientist Dr. Inder Verma resigned in June 2018 after allegedly sexual harrassing women for decades. Verma “led key studies of genes and cancer, pioneered gene therapy techniques, and was editor-in-chief of a major journal and a leader at scientific societies (including American Association for the Advancement of Science [AAAS], Science’s publisher)” (Wadman). Before his resignation, Verma was one of the most prominent scientists at the Salk; one account claims “they used to call Salk ‘Inder’s Institute’” (Wadman).  Verma “chaired and served on faculty promotion and search committees…[and] exerted influence on internal funding decisions” (Wadman). The Salk Institute also faced lawsuits filed by three of Salk’s senior female scientists “alleging that the institute systemically discriminate[d] against women in pay, promotions, and access to grants and potential donors” (Robbins) prior to the sexual assault allegations. Verma was placed on administrative leave for a brief period of time, but Salk’s Board of Trustees did not take formal action before Verma “tendered his unconditional resignation” (Wadman).

Stories of sexual harassment like that committed by Verma are not uncommon, but often times the institutions in which they occur do not take action to prevent future harassment. Instead, it is more common to see universities and institutions try to hide or minimize allegations in an effort to preserve their reputation. Scientists, especially prominent ones, accused of sexual assault often face minimal repercussions, if any at all, for their actions. They retain their funding and accolades despite all the commotion, while women who step up to tell their stories risk losing their jobs and their career prospects. This is because in incidents of sexual harassment, the perpetrator is typically in a position of power and authority and therefore is able to take advantage of the victim, often a young trainee or student. To use Verma as an example, several of the women who reported being harassed claimed they kept quiet to keep their jobs safe and stated that they were advised to avoid interacting with Verma rather than stir up conflict. The fear of speaking up is common among many sexual harassment/assault cases, but fortunately the #MeToo Movement continues to inspire and empower victims of sexual harassment to vocalize their experiences.

“Can outstanding science redeem harassment? ‘It’s the old ‘great man’ theory of the universe: “Look what he has done in science,”’ says Olivarius, the sexual harassment lawyer [analyzing Inder Verma’s allegations]. ‘Instead, look at how many careers he has hurt.’”

Backtracking a little to the topic of repercussions, big name scientists often retain their research funding, resign from an institution, and move elsewhere to continue their research. In some cases, such as at the University of Rochester, professors facing sexual harassment allegations are even allowed to return to their original posts. The majority of the time, harassers like Inder Verma are not fired and are instead allowed to resign.  Moreover, different funding sources and institutions have little to no system in place for prosecuting harassers. While there are movements taking place in support of policy changes, institutional reform can be a long and grueling process. Luckily, with enough lobbying and public support, change can be made. Dr. BethAnn McLaughlin, the leader of #MeTooSTEM, successfully organized a petition that led AAAS to revoke elected fellows for misconduct and AAAS and the National Science Foundation (NSF) to “[update] policies relevant to sexual harassment in the scientific community” (Hoy). By contrast, the National Institutes of Health (NIH) has yet to update its policies on sexual harassment. There is also an ongoing “petition asking that anyone found guilty of a Title IX violation be removed from the National Academy of Sciences as a way of acknowledging their damage to science” (Seattle 500 Women Scientists).

We can argue that these famous and powerful scientists have still made significant contributions to the scientific community and that their work is separate from the people they harass. The number of people they have harmed through their actions, however, overrules their reputation as good scientists. As stated in Wadman’s article, “Can outstanding science redeem harassment? ‘It’s the old ‘great man’ theory of the universe: “Look what he has done in science,”’ says Olivarius, the sexual harassment lawyer [analyzing Inder Verma’s allegations]. ‘Instead, look at how many careers he has hurt.’” Science is built from the collective efforts of many and “everything from subtle biases to outright malice can have enormous cumulative impacts on science and scientific progress” (Seattle 500 Women Scientists). Imagine where we could be if we didn’t dismiss harassers as “brilliant jerks.” Imagine a space where minorities—including women, people of color, and other marginalized groups—had the opportunity to share their creativity and curiosity without the looming threat of harassment or discrimination. Imagine the kind of scientific community we could create if we build each other up instead of tearing or pushing each other down.